Veteran defender David Edgar, who turned heads with a highlight-reel goal for Newcastle United as a teenager and went on to captain Canada, has announced his retirement effective the end of the year. The 33-year-old from Kitchener, Ont.
Nov 30, 2020 4:16 PM By: Canadian Press 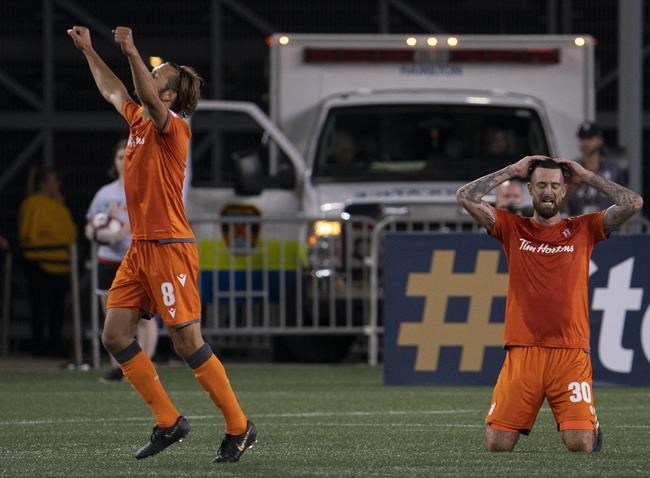 Veteran defender David Edgar, who turned heads with a highlight-reel goal for Newcastle United as a teenager and went on to captain Canada, has announced his retirement effective the end of the year.

A Forge win Tuesday would mark Edgar's swansong. Should the team lose, he could play in one final game — a play-in match later in December to gain entry into the 2021 CONCACAF Champions League.

The six-foot-three centre back won 42 caps for Canada, making his senior debut in February 2011 against Greece, and captained his county five times. His last appearance was in a friendly against New Zealand in Spain in March 2018.

At the club level, Edgar left Canada at 14 to join Newcastle's youth setup. The seventh Canadian to feature in the Premier League, he made his debut in England's top tier on Dec. 26, 2006, against Bolton. The 19-year-old made his mark just days later with a long-range rocket in a 2-2 tie with Manchester United on Jan. 1, 2007.

Edgar went on to make more than 100 appearances for Burnley, also playing for Birmingham City in England with loan spells at Swansea, Huddersfield Town and Sheffield United. He returned to North America in 2016 to play for the Vancouver Whitecaps, Nashville SC and Ottawa Fury.

While with the Whitecaps, he underwent surgery In January 2017 to repair the posterior cruciate and medial collateral ligaments as well as the meniscus in his right knee after being hit by a car on holiday in Scottsdale, Ariz., in December 2016.

"It's been quite an uphill battle since my injury in 2016," he said Monday evening from the Dominican Republic. "I wasn't really supposed to play again and to have the career I've had post-injury is something I'm quite proud of.

"It wasn't a decision taken lightly but I think if I look back, it's been in the making for a while. I'm 33. I've done quite a bit in the game for a kid from Kitchener, Ontario. It's just pretty special to me to able to finish it in a league that's in my home country that I'm so incredibly proud of. At my age it's time for that league to be used for the youngsters coming through and if I can play a part in helping them in any way, then I've done my job as a Canadian player."

After a short stint with England's Hartlepool, he signed on with Forge in August 2019, helping the Hamilton side to back-to-back CPL titles.

Canada coach John Herdman, who worked with Edgar in his first camp in charge of the, Canadian men, called Edgar "a real leader of men."

“What stood out was his selflessness and willingness to support those young players coming through the system, but at the same time to give everything he had on and off the field to be ready to compete for his country,” he added.

"He's been an integral part of this team," he said. "This is one big family, one big tight-knit group. And he's been a big part of that since he walked into the team."

Edgar has made 26 appearances (23 starts) with Forge, including 21 in CPL play and five CONCACAF League matches.

Edgar represented Canada in three FIFA World Cup qualifying cycles and two CONCACAF Gold Cups as well as CONCACAF Nations League qualifying. He was third in voting as a nominee for the Canadian Player of the Year Award in 2014.

At the international youth level, Edgar was a Canadian U-20 Player of the Year Award winner in 2006.

Edgar was 15 when he made his debut in the Canadian youth program with coach Ray Clark and was the first Canadian selected to three FIFA U-20 World Cups, starting with UAE 2003 when Canada reached the quarterfinals.

On his 19th birthday — May 19, 2006 — he scored the opening goal in a 2-1 win over Brazil in Edmonton, Canada’s first victory at the men’s youth level against the South American powerhouse.

Edgar is currently enrolled in the National Teams Education Program, which supports the coach education of its current and former national team players.

Staying with Forge in an off-field role is "a conversation for another day," he said.

"I'm looking forward to spending Christmas with my family as a retired footballer."

This report by The Canadian Press was first published Nov. 30, 2020