WINNIPEG — Blake Wheeler and the Winnipeg Jets clarified the North Division playoff picture Tuesday night. Wheeler had two goals and two assists as Winnipeg defeated the Vancouver Canucks 5-0 to clinch third in the standings.
May 11, 2021 9:53 PM By: Canadian Press 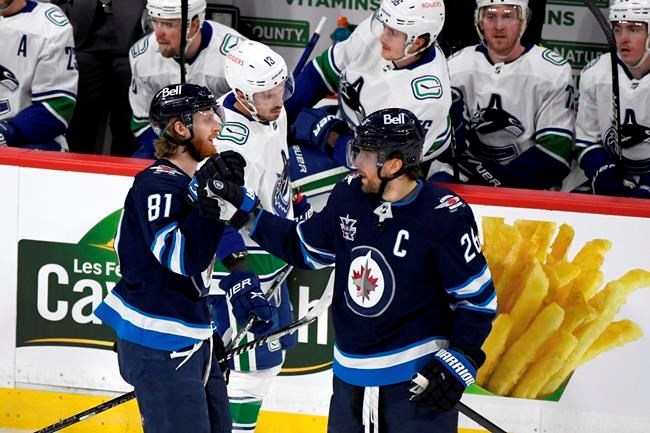 Wheeler had two goals and two assists as Winnipeg defeated the Vancouver Canucks 5-0 to clinch third in the standings. The Jets (29-23-3) will open the playoffs against the second-place Edmonton Oilers (34-18-2) with Original Six rivals the Toronto Maple Leafs (35-13-6) and Montreal Canadiens (24-21-10) meeting in the other series.

Winnipeg had needed just a point to cement third spot. But Wheeler said securing a solid victory so close to the playoffs certainly doesn't hurt.

"You've got to give the guys a lot of credit to keep pushing and kind of keep doing the right things and the same things," he said. "Ultimately when it comes to playoff time, it's a lot harder to score goals and that's the way you score goals.

"You just keep doing the same things over and over again with that blind faith that you're going to get rewarded for it."

It was also revealed Tuesday earlier this season Wheeler continued playing despite having cracked ribs. But the Jets captain said there was never a doubt in his mind that he wouldn't play.

"I still felt like I was able to help the team and that was the most important thing for me," he said. "Certainly I wasn't myself but if I was holding us back that would've be a different story but our team was still going in the right direction."

Head coach Paul Maurice stressed player safety is always Winnipeg's top priority. But when it comes down to pain tolerance, Wheeler has earned the right to determine whether or not he can play through it.

"We don't put players in harm's way," Maurice said. "Before anybody plays, the doctor decides whether this is just a pain thing or this thing can get worse.

"But if it's a pain-tolerance thing, then you're going to listen to your guys. He (Wheeler) has an incredibly high tolerance for pain and at the same time I'm going to watch that game and if clearly he can't play the game, he's not going to play."

Kyle Connor had a goal and two assists, Mark Sheifele registered a goal and assist and Mason Appleton scored the other for Winnipeg, which avenged a 3-1 loss to Vancouver on Monday night. Connor Hellebuyck stopped 24 shots for his fourth shutout of the year and 24th of his career.

"We played a really good game tonight and I'm really excited to see how we carry this forward."

Braden Holtby stopped 31 shots for  Vancouver (21-27-3), which remains last in the North Division.

"I think it's pretty obvious, not a lot of good things to find in that game start to finish," said Canucks head coach Travis Green. "They're a good team trying to get ready for playoffs and we weren't at our top level.

"Felt bad for Holts tonight. We were in our zone a lot of times. We weren't good in any areas of the game."

Veteran Winnipeg forward Paul Stastny played in his 1,000th career game. Prior to the contest, with his wife and two young children on the ice, the 35-year-old Stastny -- who has also played for the Colorado Avalanche, St. Louis Blues and Vegas Golden Knights -- was honoured during a video tribute before receiving a custom art piece and the first-ever silver stick in franchise history from the Jets.

"It was emotional," Stastny said. "I was happy, more than anything, that my kids got to be there and my wife.

"Its always nice to hear compliments, compliments are nice, let's face it everyone likes it. I don't like the limelight. I'm happy it's over with because I like to fly under the radar."

But Stastny admitted it's much easier to celebrate the achievement with a victory.

"If we had lost 5-0, everyone would've still grumpy in there," he said. But I think everyone is still in a good mood.

"We know where we're sitting now. It's always nice to win on a special night like this."

Wheeler said the Jets wanted to do everything they could to make Stastny's achievement extra special.

"We wanted to have a good night for him, we wanted it to be a memorable night for him . . . it's something he's always going to remember."

"I'm just hoping one of them is right."

Connor opened the scoring at 7:48 of the first with his 24th of the season and second in as many games against Vancouver. Connor took a nice tap pass from Wheeler before beating Holtby.

Wheeler put Winnipeg ahead 2-0 at 2:05 of the second, registering his 14th of the season unassisted. Wheeler drew an assist on Scheifele's deflection at 8:33, Scheifele's 21st of the year.

This report by The Canadian Press was first published May 11, 2021.