WNBA postpones game between Storm and Lynx due to COVID-19

BRADENTON, Fla. — The opener of the WNBA playoff series between the Seattle Storm and the Minnesota Lynx was postponed nearly 90 minutes before its scheduled tipoff Sunday because of inconclusive COVID-19 test results for Storm players.
Sep 20, 2020 7:26 PM By: Canadian Press 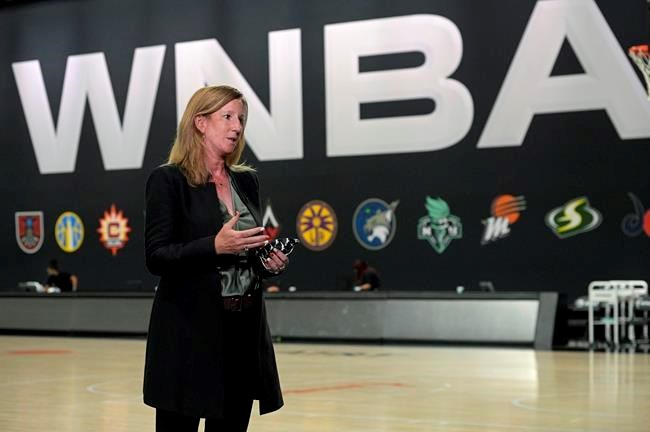 BRADENTON, Fla. — The opener of the WNBA playoff series between the Seattle Storm and the Minnesota Lynx was postponed nearly 90 minutes before its scheduled tipoff Sunday because of inconclusive COVID-19 test results for Storm players.

The players with inconclusive results have undergone additional testing and are in isolation, according to the WNBA.

WNBA Commissioner Cathy Engelbert was at the hotel when she found out about the inconclusive results and boarded the Storm's bus to let them know.

“We needed more testing and data,” Engelbert said in a TV interview. “As soon as I talked to them they were concerned about health and safety, and it wasn’t about basketball at that point.”

The Lynx already had arrived at the arena and some of the players had been warming up when they were told the game was postponed.

“This is the hardest part of COVID-19 of putting on live sports,” Engelbert said. “Every day you’re reset to zero. Keeping the bubble safe and making sure there’s no community spread. The purpose of testing program and protocols is to pull anyone out before they are infectious.”

The league announced Sunday night that Game 1 of the best-of-five semifinal series would be played on Tuesday. That was supposed to be Game 2.

“We want to make sure we have all the data and testing if someone is affected with COVID,” Engelbert said. “We can isolate them and take care of their safety. Hopefully we’ll get good data over the next 24 to 48 hours. Hopefully get back on the court for Game 1 on Tuesday. We will test them tonight and have additional testing on those players that had inconclusive results.”

Engelbert, along with players' union head Terri Jackson, went into the Connecticut locker room after the Sun's semifinal series win over Las Vegas to tell the players about what had happened.

“None of us knew what was going on of course,” Connecticut coach Curt Miller said after his team's win. “Cathy came and spoke to our teams. We’ve done a great job of keeping COVID out of our bubble. I hope these are false positives. The thing that is concerning is the multiple positives.”

The commissioner also talked to the Las Vegas coaches about it. The Aces had gone through an inconclusive test result in the regular season; Lindsay Allen had to miss a game because of one.

Las Vegas coach Bill Laimbeer said in a postgame interview that the league had sent an email to the four teams still playing to outline the potential problem of inconclusive positive results.

The WNBA made it through the regular season with a few false positive tests for the coronavirus, but no players developed COVID-19 once the season started. The season is being played inside a bubble environment at IMG Academy in Bradenton, Florida.

“The Storm organization fully supports the decision to postpone the game. The health and safety of the WNBA players, team staff and all those involved in the production of this season remains our top priority,” Storm co-owner Lisa Brummel and CEO and general manager Alisha Valavanis said in a statement.

Everyone inside the bubble has been tested for the virus every day.

“You have to follow your gut and instinct and data and science,” Engelbert said. “Everything has worked in the bubble because we followed the science. We had players miss games in the regular season. This was the right thing to do today.”