A feast for the powder-hungry 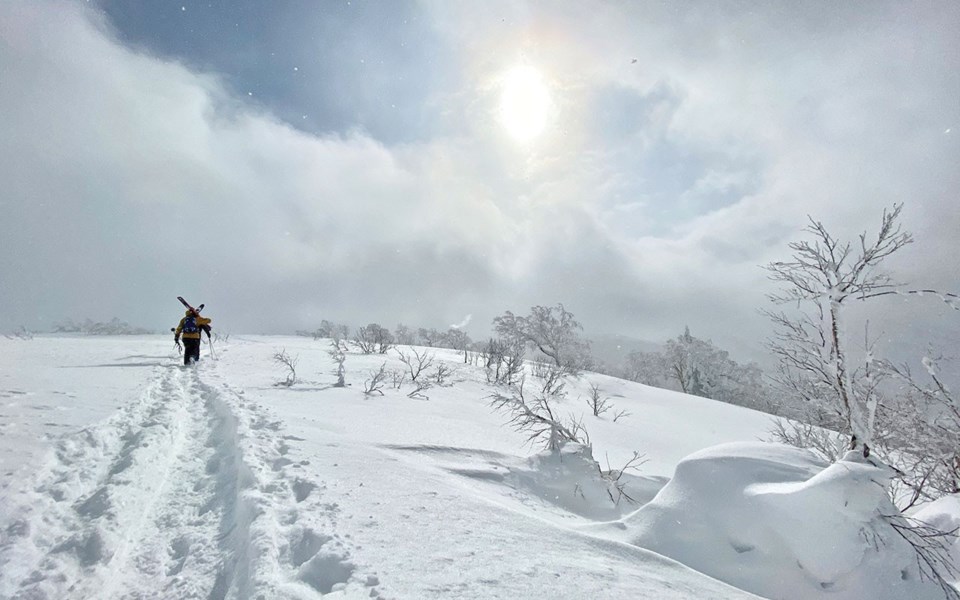 POWDER HOUNDS Skiing in Japan has truly changed, and the powder kami were happy for us as we hiked above Kiroro Resort on Hokkaido. Photo by Leslie Anthony

In the Shinto religion, there are 8,000,000 deities or kami. No one has really counted, but with this number synonymous with infinity in traditional Japanese culture, it suffices to cover the full rock-tree-chair-cloud gamut of entities kami are thought to inhabit. You can encounter a handful of the more prominent kami at Shinto shrines and monuments, where their presence demands reverent ritual that follows strict rules. Once upon a time, the same gestalt ruled Japanese ski areas.

As Whistlerites know, Japan is a destination of choice for powderhounds weaned on social-media tales of the deep snows of the Japanese Alps on the island of Honshu, and the even deeper snows of Hokkaido to the north. Adventure-ski operators and private guides from Scandinavia, Europe and North America annually swarm once-sleepy Japanese ski areas with clients on pilgrimage to this particular powder shrine.

These days, this off-piste bounty is sanctioned by the Japanese, happy to resurrect a moribund ski industry with a new, burgeoning tourism sector. But getting to this point was an often-difficult path, a tussle between a respectful, tradition-bound society that saw skiing one way, and brash, disruptive visitors with other ideas. The issue, in short, was this: the Japanese didn't ski off-piste—yet this was exactly where visitors wanted to go. If you skied Japan 20 or 30 years ago, you automatically became a stealth line-poacher.

Deference to the forest's many kami was one reason the Japanese were loath to forsake their Samurai-like dedication to manicured pistes and technical pursuits like racing and bumps. Other reasons included nature reserves, geothermal hazards, avalanches, and a lack of ski patrol or other personnel trained to deal with backcountry traffic and its inevitable trouble. In any event, snow fell in such vast amounts and with such frequency that it was often too deep to ski—so what was the point? Consequently, without widespread dissemination of a powder-skiing ethos or someone to lead the way, the Shinto impetus for leaving the woods undisturbed led to widespread prohibition, with kilometres of rope ringing forested sectors, confusing Jinglish signs like "Keep In," and cut-out, human-sized policemen holding up a hand in the universal "STOP" gesture propped above tantalizing lines. For the more disrespectful, powder-seeking gaijin, these were all invitations to dig in.

The powder police-state slowly began to erode with the snowboarding revolution and steep-and-deep ethos of the extreme-ski era; in the 1990s, global snowsport media discovered Japan's preternaturally deep snows. A raft of video disseminated the mind-boggling—though still prohibited—experience around the world, sparking an influx of international ski bums. With sudden demand, a select few areas began catering to the powder-hungry. When the big-mountain freeski craze hit just before the millennium, all hell broke loose as foreign skiers streamed to Japan. Authorities slowly relented, and the seemingly impossible happened: a new generation of Japanese snowsport enthusiasts also voted with their feet, choosing to ride mostly at areas where they were allowed off-piste.

Which brings me to my recent eighth trip to Japan and a visit to the Hokkaido ski area of Kiroro, the acme of the country's new ski ethos. Just 60 kilometres from Sapporo, Kiroro is typical Japan in featuring hedgehog hills bristling with well-spaced hardwoods separated by sharp-cut valleys. Translation? Great skiing in deep snow with luge-run valley exits along creekbeds.

What sets Kiroro apart, however, is this: it claims the largest ski acreage of any Japanese resort, and does so by designating 14 off-piste zones within its boundaries. These areas lie both between cut pistes or fully along the resort's margins, with trails and cat-roads that funnel back into the resort. Some of these are large enough to spend an hour skiing through, but with no grooming, glading or safety measures, also large enough to get lost in. Each area, marked by an entry gate with name and number, offers great skiing. But there's also plenty of route-finding and bushwhacking—adventure skiing at its finest.

In addition, de facto backcountry exit gates stand near the topmost lifts; for these, you must be equipped (there's an electronic beacon check) and register your itinerary (for free) with local authorities. That's not as onerous as it sounds since you can actually check in and out online with your phone whenever you exit—a nifty safety feature.

Despite being a purpose-built resort with massive ski-in-ski-out, cruise-ship-style hotels (think Portillo), Kiroro should appeal to low-end intermediates but appears fully committed to powder-skiing. And why not? Every day I was there saw at least 50 centimetres of snow. On our second morning, with 70 cm of new, we thought to wait in line for the gondola to open at 9 a.m. Arriving at 8:50 we were 20th in line, with only a dozen more behind us when the lift cracked. Our first run was double overhead in one of the in-bounds forest sectors, with an occasional sliver of sun lighting up snow-encrusted branches in an otherworldly glow. As we rode back up, constant Woohoos emanated from empty forests below, and I sensed this: skiing in Japan had truly changed, and the powder kami were happy for us.

Leslie Anthony is a Whistler-based author, editor, biologist and bon vivant who has never met a mountain he didn't like. He travelled to Kiroro Resort with Tr Adventure Travel.