A mountain of hospitality

When the strangers arrived, the Italian town rolled out the red carpet.
Mar 14, 2018 6:00 PM By: Leslie Anthony 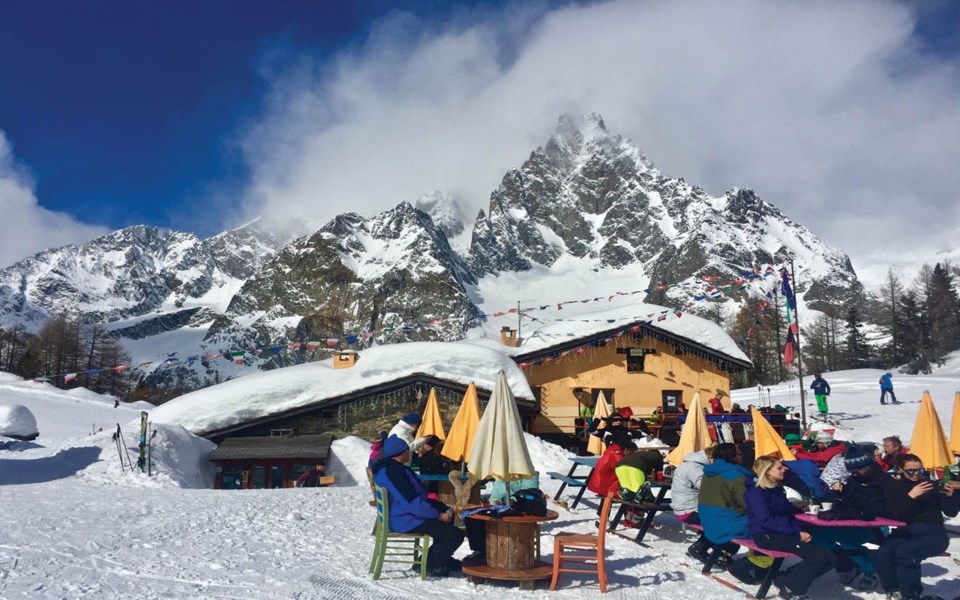 CALM BEFORE THE STORM All looks calm outside Maison Veille on the slopes of Courmayeur, but inside, outstanding food — and madness — await. Photo Leslie Anthony

When the strangers arrived, the Italian town rolled out the red carpet. To start, everyone was invited to walk in a parade, which wound along the cobblestoned Via Roma led by concertinas, tubas, cymbals and drums echoing from the stucco and brick as they had for some 800 years. Crowding balconies to catch the excitement, villagers waved to the newcomers, whose flags marked every country in the alpine world.

The ragtag column reached an ancient church. Bells rang and marchers dispersed onto a fronting plaza, with its cross-valley view to the wrinkled feet of Monte Bianco, whose glaciated heights hung in a corner like alabaster smeared on a cerulean screen. A small stage had been erected on which dignitaries extended official welcome. Speeches were made to cheers in a dozen languages, the warm syrup of camaraderie flowing throughout.

When the dignitaries finally filed off the platform, the remaining buzz manifested as frenzied bacchanalia. Townsfolk had laid out a feast on long tables set across the plaza. Rolling back cloth covers revealed mounds of local dried meats, cheeses, fruits, vegetables, olives, and breads of every description. There was also wine and beer and grappa. Many of the visitors had never seen such a volume of quality food — and all for free. They fell upon it as if it were last sustenance, a few surreptitiously filling their pockets in provision. That proved unnecessary, as most meals during the 1992 World Telemark Championships would be drawn from a similar horn-of-plenty. For the town of Courmayeur did not take its largesse lightly, whether feeding the royalty that once frequented the valley, or the itinerant dirtbags — myself included — arrived for a global telemark fête.

Food was the addictive carnet of passage through this valley, and the good people of Courmayeur were champion enablers.

Over the years, I've returned several times on one ski mission or another, but also vaguely pulled by that initial heady hospitality; strolling onto the plaza that first welcomed me to Courmayeur is always a pleasurable memory. These days, the route of that erstwhile parade is more of a see-and-be-seen catwalk for fashionistas from Milano and Torino, many of them non-skiers, who stroll the cobble with tiny dogs on long leashes, shop the absurd windows of designers you've never heard of, and duck into small wine bars and cafés to mingle with the Gore-Tex crowd, enticed by the huge spreads of free food on offer during après hours.

Courmayeur lacks all attitude and pretense of a ski town, yet remains one. There's some 80 kilometres of the usual luxuriously pedestrian pistes, but also some of the most serious skiing in the Alps. In addition to truly unheralded tree-skiing — steep, pillowy lines through well-spaced larch and pine — a new lift system on Punta Helbronner accesses the glaciers and chutes of Monte Bianco. The top-station offers one of the world's great viewpoints — and the start for descents to both France and Italy: Toula Glacier, Couloir Marbrées and Vallée Blanche.

Busy Chamonix, a mere 12-km tunnel away on the Mont Blanc side of the massif, is flooded with mountaineers and powder-hungry experts from around the world, yet there's no fight for untracked snow in laid-back Courmayeur. And the bonus is extraordinary coffee, amazing restaurants, excellent wine, humble villagers and guides, and the best on-hill food in the Alps.

Few ski resorts boast more on-mountain restaurants than lifts, but Courmayeur does. And infamous Maison Vieille is a vanguard. Here you'll likely encounter the frenetic proprietor, Giacomo Calosi. He's always smiling because his clients are always smiling. Of course, he — and possibly the garlic flatbread and lemon water he deposits on your table with a welcoming flourish while you're still doffing wet gear — is the reason for your grin, closing an instant circle in a place that daily channels more of a New Year's Eve vibe than mere lunch: amidst curtains of ski clothing hung from crisscrossing lines that sail over crowded tables in the kitsch-addled establishment, people make toasts, sing, swig from bottles, and kiss fingertips in approval of the latest arrivals to their table — hot focaccia; wood-oven pizza with fresh tomatoes, basil and prosciutto; a range of home-made pastas, succulent meat and cheese platters; blueberry cake and fruit flambé. It's hard to see how the tiny kitchen of this ancient, stone-walled hut keeps up, but it does, and with consummate charm.

In Maison Vieille, as in town, skiers celebrate their discoveries, on-piste and off. And Giacamo — a personification of the town's ethos — is in the thick of it, ordering, delivering, bussing and flinging wine and liquor at everyone. As things quiet down in the late afternoon, he has a chance to sit with clients and the real trouble — or fun — begins. Out come the stories, and the homemade limoncello.

Whatever your ski plans for the afternoon, the Courmayeur hospitality vibe has thrown you a new challenge. You are no longer a stranger in lock step with a welcoming parade, but an honoured guest.