A raft in wolf's clothing

Getting hit in the face by a bracing 4 C standing wave while descending a glacier-fed river isn't everyone's idea of fun. But for those like myself who enjoy such things, it had also been a much-anticipated prospect in this summer of sizzle.
Aug 19, 2015 6:00 PM By: Leslie Anthony 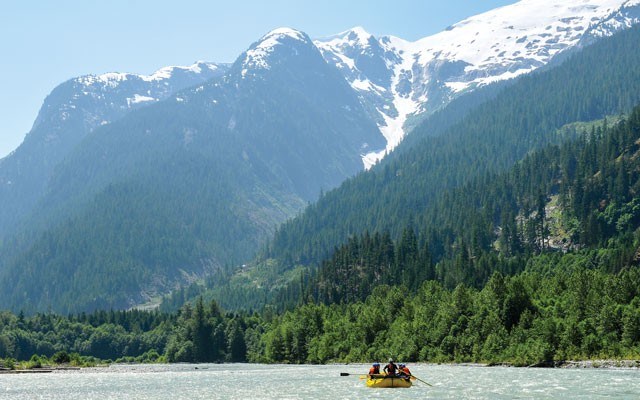 Getting hit in the face by a bracing 4 C standing wave while descending a glacier-fed river isn't everyone's idea of fun. But for those like myself who enjoy such things, it had also been a much-anticipated prospect in this summer of sizzle. So imagine the pique when my scheduled rafting date with the Elaho River turned out to be only the second overcast day in as many months — the first one having been the previous day. Alas, one could hardly begrudge the previous evening's welcome rain, coming as it did on the heels of a terribly smoky week in the Sea to Sky corridor, a sprinkle that may have even added a smidge to the already respectable water levels on the river. Besides, I'd just spent the night in a comfortably appointed rustic cabin at Sunwolf just outside Squamish, lulled to sleep by those very raindrops and the additional sound of water rushing away from the convergence of the Cheakamus and Cheekeye Rivers. And while it may be the waters coming together that define the site on which it stands, it's a convergence of fortunes and ideals that have made Sunwolf one of the most important outdoor adventure and culinary destinations within a day-trip of Vancouver, home of boutique whitewater-rafting experiences, wintertime eagle-viewing float trips, and the idyllically situated Fergie's Cafe.

Let's start with Fergie's, where we'd enjoyed a private dinner at the capably inventive hands of chef Jason Nadeau. After working in several Vancouver restaurants Nadeau had previously moved to Squamish as chef for the North Vancouver Outdoor School before claiming fame as the man behind the town's celebrated food truck, Locavore. While our one-of-a-kind repast was a multi-course sensation of new flavours and combinations that had everyone both guessing and smiling with approval, Nadeau's focus is the breakfast and lunch service for what has become a must-visit eatery in only three short years. Situated in a copse of trees at Sunwolf's entrance, the unique riverside location may be what first drew customers, but they return — often — for signature breakfasts that include handmade sausages, fresh-baked biscuits and muffins, and house-smoked meat and fish (when you have your own smoker, it usually leads to fits of... deliciousness). Working with local farms like Stoney Mountain and Wild Mountain to source the bestest and freshest, such is the café's current popularity that it can serve hundreds on a busy summer weekend day, with spillover guests happily spreading across the surrounding grass and under trees to enjoy the view of Mt. Alpha.

Fergie's is but one element of the Sunwolf equation, and someone was responsible for merging the eat-ethos with rafting. Those someones came in the form of our dinner companions, Jess and Jake Freese, personable, ever-smiling Brits who also happen to be longtime Sea to Sky locals with never-ending stories and a knack for making you laugh at, well, everything. Like most places in B.C., Sunwolf boasts the typical history of turn-of-the-century humble bushmen types. In this case, a former logging depot known as Yapp's Camp which, in the 1950s, a certain Ferguson family transformed into Fergie's Fishing Lodge — a string of riverside cabins and motel that bristled (pun intended) with fly fishermen from across the Pacific Northwest who'd arrive by steamship in the days before the 1958 opening of the road from Vancouver. They came to fish the Cheakamus, Squamish and Ashlu valleys for salmon, steelhead and char. Rafting, which seems a logical attraction given the location, entered the picture here in 1995 under the new ownership of Sunwolf Outdoor Centre. Fifteen years later, Jess and Jake entered the picture.

Meeting as 16-year-old biology lab partners in high school, both went on to earn biology degrees in college, but adventure called from distant quarters. Spending 2004 – 2007 working winters in Whistler as ski/snowboard instructors and summers in the Caribbean teaching scuba diving, both also attained their B.C. Commercial River Guide certifications and began guiding for Whistler River Adventures, with Jake also finding his way into Whistler's fine-dining scene as a chef. When Sunwolf went on the market, a chance drive-by by Jess seemed like kismet and the rest, as they say, now seems like history — an opportunity to use their great depth and breadth of experience to provide an exceptional, personalized experience for a wide range of guests from adventure-seekers to brunch-seeking locals and weekend wedding parties. Under their direction, Sunwolf's dozen riverside cabins offer a charming throwback to the Golden Age of Canada's lodge culture, a cross-country phenomenon as recognizable beneath towering West Coast cedar and Douglas fir as it is in the boreal bushscapes of the Maritimes.

But back to the river trip. Within a few hundred metres of starting — and after stopping to catch a drink from a glacial stream — we were in the thick of it. Sure you might be surrounded by soaring peaks, towering coastal forest, hanging ice, and waterfalls that lie like silver ribbons across glacier-ground granite, but your attention is often more focused on the class IV water passing beneath your paddle blade, stretches with suggestive names like Cheesegrater and the Devil's Elbow, the latter a sharp turn and eddy where rafts pull over and those who so desire can make an improbable four to five metre cliff jump into the water. This is achieved by scrambling up climbing gym holds bolted to the rock and shimmying along a rope across a ledge, none of which is all that easy while wearing a thick wetsuit and booties, but altogether satisfying and a quick way to get that icy water slap — not to mention making you more comfortable with the river experience as a whole. After a rapid called Steamroller you stop on a private island where the guides whip up a barbeque lunch in a hidden aspen grove. Afterward you alternate between rapids and leisurely floating and a chance to really drink in the diminufying scenery, rounding out eight-hours of boutique rafting at its finest before your pick-up and drive back to the comforts of the lodge, where, like the rivers that surround, it all seems to come together.