A steely farewell to Ironman

"No man gives me a crown. I pay the iron price. I will take my crown." - Balon Greyjoy Sunday is the last Ironman Canada Whistler will see for a while, maybe even ever.
Jul 27, 2019 3:00 AM By: Vince Shuley 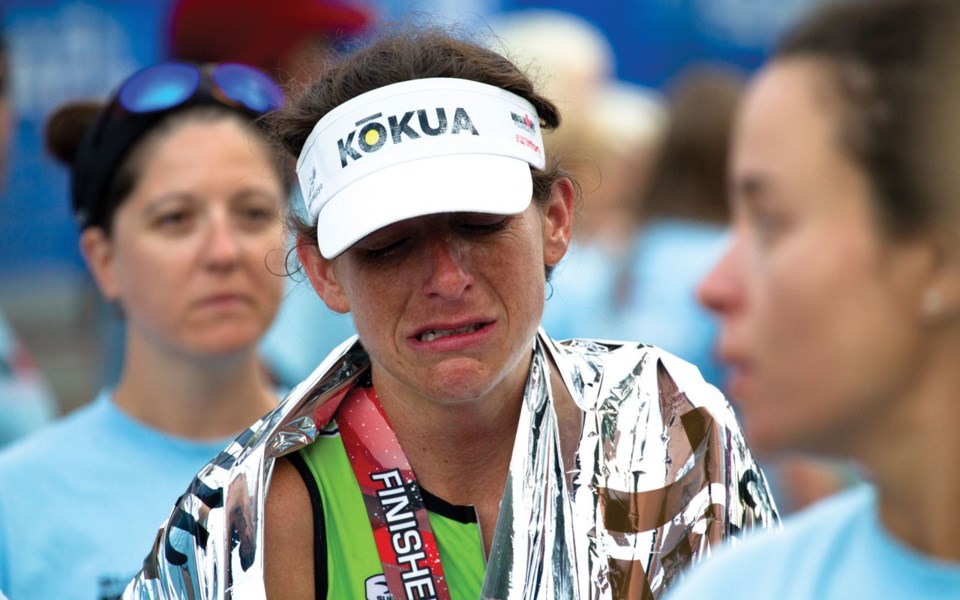 Big finish An emotional finish line moment for a participant at the 2015 Ironman Canada in Whistler. photo by Vince shuley

"No man gives me a crown. I pay the iron price. I will take my crown."

Sunday is the last Ironman Canada Whistler will see for a while, maybe even ever. The U-turn back to Penticton has received the proverbial standing ovation from many Whistler locals and businesses inconvenienced by highway closures, who—politely or not—told Ironman not let the door hit its ass on the way out. It remains to be seen whether we're going to lose tourism spending dollars or not from all those Ironmen competitors who will now be heading to the south Okanagan with their carbon road bikes, squid helmets and tubes of chamois butter. If the event was in September or May, yes we might. But July weekends already sell out hotel rooms without day-long road closures, though traffic congestion still causes locals to tear their hair out getting from Function Junction.

Like my colleague Brandon Barrett ("Whistler Deserves Answers on Ironman," Editorial, Pique May 16, 2019) I was a little perturbed about how the deal between Ironman and the RMOW abruptly ended a year before the contract was up without repercussions. No penalty to the Chinese-conglomerate owner that generated US$31.7 billion in revenue in 2018? I too would like to see the $282,000 in RMI funding go somewhere more needed.

Economic benefits (real or perceived) aside, the greatest thing Ironman did was allow locals to throw their hat in the ring for one of the toughest triathlon events in the world. I don't think it was ever more than a few dozen people in Whistler who enjoyed this privilege, but I'll never forget the stories from my friends who crossed the finish line after putting their bodies through the meat grinder. The worst were the tales of the mass swim start; getting punched, kicked and having goggles torn from their faces. The best were the tales of friendly cheer squads spurring competitors to keep going on the final kilometres of their run and not give up.

I shot photos at the Ironman finish line for the local press for a few years. Seeing people take their last steps of the marathon run, it was borderline disturbing watching faces turn from superhuman elation to pure agony as volunteers caught their collapsing bodies and wrapped them in space blankets. Sometimes the freshly minted Ironmen were rolled away in a wheelchair, unable to stand.

I've considered attempting an Ironman one day. I don't need to prove anything with a supersized triathlon, but having tested what my body was capable of over weeks of slowburn mountain travel, I'd be interested to see how I'd manage a single day push on this scale. It's not the race day that necessarily intimidates me (OK, maybe the fear of drowning during the mass swimming start is real). I think I could handle suffering for 16 hours straight. The part that scares me off Ironman is the training. Every Ironman finisher I interviewed over the years was training for at least six months, some longer. They essentially assumed the responsibility of a part-time job, making sure their intervals got done every week and often working in extra hours of training around their spare time—spare time that's normally spent with family and friends. Fun activities like social rides and Toonie races got sidelined until the Iron catharsis was behind them. Every big commitment requires certain sacrifices.

Of course I could wing it and just train the bare minimum a couple months ahead (I've met people who have actually pulled this off), but without any real triathlon experience I'd probably end up pulling out early from exhaustion or tragically getting loaded onto a shuttle bus when I miss the final cut off.

The good thing is that there's no rush to get an Ironman done. Many participants are in their 40s and 50s, some a decade or more older than that. Swimming, road cycling and marathon running aren't the injury-inducing, knee-breaking sports that I currently enjoy in my spare time (OK, maybe the running will wreck some knees), but I could probably see an Ironman being in the cards in the next say, 20 years. If that happens, I'd love to do it in Whistler more than anywhere else. But the familiar scenery won't make it any less of a painful experience.

It makes sense for Ironman to take an extended break from Whistler. As amazing as our mountain setting is and how many visitors we are able to accommodate at once, we still only have one road into town and one road out of town. The prior Ironman Canada cycling course ran south to Osooyoos then west to Keremeos before returning to Penticton in one massive 180-km loop, passing three beautiful lakes in the South Okanagan. The logistics of this are far simpler than running competitors around in circles on their bikes, restricting traffic and strangling local businesses that aren't positioned to reap the Iron rewards.

Penticton was happy to see Ironman leave in 2012. Now they've welcomed it back with open arms. Will Whistler do the same in another eight years?

Vince Shuley has never paid the iron price. For questions, comments or suggestions for The Outsider email vince@vinceshuley.com or Instagram @whis_vince.