Mark Abma picks me up in a Tesla for the drive to Loggers Lofts, his new downtown Squamish development nearing completion. Ever the Earth-child, Abma is barefoot and shirtless on this sweltering day.
Jul 21, 2019 12:40 AM By: Leslie Anthony 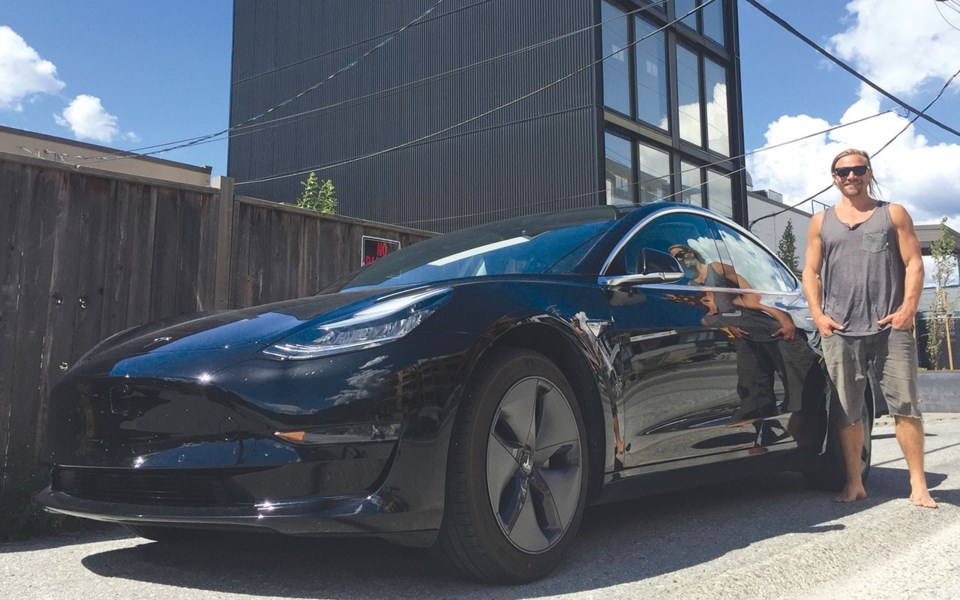 sustainability in action Mark Abma stands in front of a building and car that might be smarter than him—but they can't ski. Photo by Leslie Anthony

Mark Abma picks me up in a Tesla for the drive to Loggers Lofts, his new downtown Squamish development nearing completion. Ever the Earth-child, Abma is barefoot and shirtless on this sweltering day. With his long, blond top-knot brushing the shaved side of his head, he fiddles with the TV-sized computer console as the car hums silently to life. It's like being chauffered by some forest sprite from the future.

The future is actually a comfortable place for Abma, whose long pro-ski career has always seen him with eyes on the horizon. One of the first to bring serious terrain-park trickery to a big-mountain environment, Abma riveted skiers' attention with both film exploits and a sustainable-minded approach to life in general. Always a man with a mission—whether driving to Alaska in a veggie-oil-fuelled truck, erecting a geodesic dome, or converting an antique snowcat for cross-country travel—his latest is Elevation Collective, as one of a troika of visionaries looking to design and build creative, sustainable developments that will improve lives and communities. Along with friend Jimmy King and architect Chris Hunter, Abma seems to have achieved that with Loggers Lofts.

When I see the sleek, four-storey duplex on Loggers Lane at the rear of a lot whose historic frontage still hugs Cleveland Avenue, I wonder if Squamish is ready for the kind of smart, multi-use urban chic now infilling the cores of Canada's largest cities. But with the town growing in a dozen directions, and ideas of how we work, live and play undergoing tectonic shifts, I conclude—as did the boys—that Squamish is ready for anything. If these are the problems of our times, Elevation Collective looks to be part of the solution.

Abma had been scouting Squamish property as the residential market peaked at prohibitive, but saw commercially zoned property as still relatively affordable. "I found this lot and asked Jimmy if he wanted to partner," he explains. "It was zoned mixed use, so at first we thought about back-building with shipping containers, but soon realized that was too much of an experiment."

They were introduced to Chris Hunter, like-minded on sustainability, efficiency and community, and having fortuitously built on a similarly narrow (less than eight metres) lot in Vancouver's Chinatown. An aficionado of the more-with-less design sensibilities of Scandinavia, Hunter had a solid idea for vertical innovation: commercial space below a six-room configuration designed to be as flexible and multi-purposed as possible: two rooms per level with stairs and bathrooms between, which could be offices, bedrooms, living space, or various combinations thereof, topped by a patio and living roof with 330-degree views to major peaks, Shannon Falls and Howe Sound, with a pop-up area for vents and solar mechanics.

Applying experience with passive buildings, Hunter incorporated efficiencies and details like toilet tanks in walls and recessed appliances. Highly customized kitchens include counters of PaperStone®, made from recycled paper and a non-petroleum resin. A cross-ventilated design features heat pumps, sliding doors, and high-efficiency aluminum windows. The advanced Swedish wall system has an R-value double that required putting the building 10 years ahead of code. Then there's the Tesla—which belongs to the Strata, available for tenants and powered in part by the building's wind and solar fittings.

Smart buildings don't come cheap. The reality of innovation is plenty of up-front soft costs before shovels get in the ground. "If you're on the leading edge, you're on the bleeding edge," says Jimmy. "There's a fine line between being a disruptor and being amenable to what's going on; hopefully we've struck that balance."

Adds Abma: "Banks will help to a certain amount per square foot.

"But beyond that you're reliant on grants; municipalities can have incentives, but there aren't many in Squamish yet. In the end the banks saw value, and the district might use it as a case study—both as an urban infill project and implementation of car-sharing."

And what has this all meant for Abma? After ski season, forgoing his Pemberton home for a couch in Squamish, pitching in where he can—painting, picking up a free load of used interlocking stones from the RMOW, welding steel planters with his dad, and... driving writers around in the Tesla.

Now 2.5 years into it, Loggers Lofts are ready for occupancy. But even that will be flexible, incorporating nightly rentals and curated outdoor experiences with local tour operators. The ride company Shred Shuttle will run both YVR-to-Squamish and Squamish-to-Whistler services for snow-riding and mountain biking, and Loggers Lofts location provides quick access to the area's watersports, climbing, hiking, and skiing. Down the road, Elevation Collective hopes to roll out similar models in other cities.

Being first down any progressive path means battling orthodoxy, but once people are on board, a next project is inevitably both smoother and better. "We're looking at a 14,000 sq. ft. mixed-use development called The Latitude," enthuses Abma. "Increasing our solar by 800 per cent and incorporating geothermal got the province's attention; it selected us as a finalist in a comp that funded the design and allowed us to proceed with energy modelling."

With cruise-ship apartment blocks going up and urban revitalization projects like this, Loggers Lane is shedding its image as a post-industrial back alley. "Sustainability," says Abma. "It's the future."

Leslie Anthony has never had a real job—which is why he writes about them. Would yours make a good story? Let him know at docleslie@me.com