A Winter's Tale — attracting new players to the snowplay party

"Innovation distinguishes between a leader and a follower.
Sep 12, 2012 9:00 PM By: Michel Beaudry 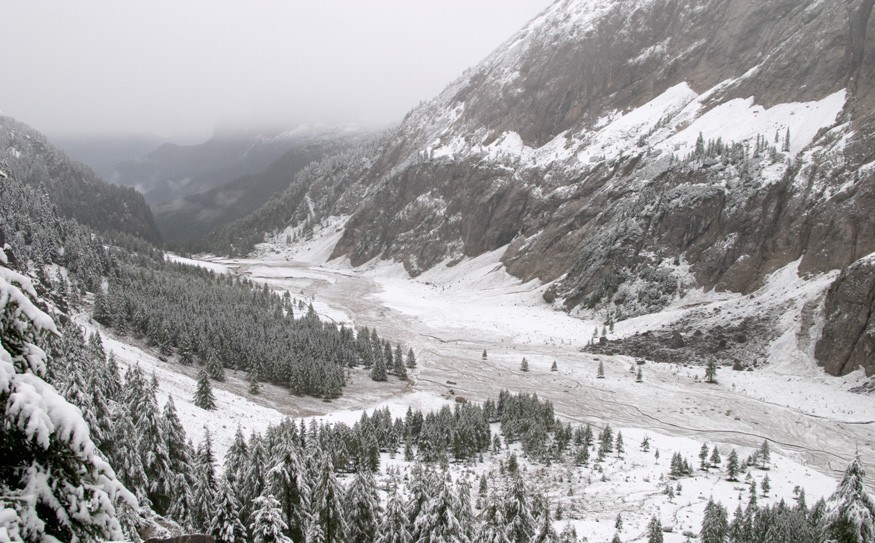 "Innovation distinguishes between a leader and a follower."

As much as I look forward to summer and all the activities that sun and warm weather can offer us, my heart still skips a beat when I see the first hints of new snow in the high country. I can't really explain it in rational terms. It's full-on existential. Full-on foolish, illogical, unexplainable an-ti-ci-pa-a-a-a-tion.

It's not that I enjoy living in the dark for 18 hours a day or anything... or that being cold and wet is my favoured living condition. Still, the realization that I'll be sliding on snow soon — that I'll be zooming down a crazy winter carpet that lets me fly without leaving the ground (and doing it for days and days in a row) — well, that manages to bring a smile to my face every time.

As I said, it's not rational. Still, that's why I get so jazzed up in early September. Barely two months now till everything changes in this town... the countdown is on.

I know. I know. Whistler has grown up these last few years. Summer activities are increasingly important to the community's bottom line — both financially and culturally. Mountain biking, road cycling, hill walking, hiking, touring, yoga even — suddenly Whistler is beginning to attract the same kind of active-minded people in the off-season as it does during its traditional high season.

It's taken a while. Sure. But I think we've turned the corner. As my boss at the Pique, Bob Barnett, brought up a couple of weeks ago in his editorial: "This summer's combination of festivals, participatory events and animation has worked well with the long term strategies of the municipality and Whistler Blackcomb."

To me, the biggest change in Whistler's summer face has come on the "participatory" side of things. And most of these new events, thankfully, are self-propelled. Bike races, running races, enduro tests, yoga-wellness gatherings — the list of successful participatory events in and around Whistler is growing by leaps and bounds. And they attract a group of people to this place who may become (if they're not already) four-season visitors.

We saw it again this past weekend with the skinny-wheelers participating in the Vancouver-Whistler GranFondo. Animation, enthusiasm, fun, passion — this was the kind of outing that could justify its own dedicated festival-weekend. I mean, I don't know about you but I'd rather have a resort-full of healthy, outgoing outdoor-focused bike riders than a bunch of urban yahoos coming up here to rent cheap rooms and party-drink-fight the night away.

The thing is, most of these new events are also being embraced by the local populace. And I believe that's another vital component in their growing success. The more Whistlerites are encouraged to participate alongside visitors and newcomers — the more they want to participate alongside non-residents — the bigger and better anchored in the community those activities will become.

I mean, look at Wanderlust last month. Sure, there were lots of visitors. But local representation was impressively high as well. As for the Fondo, I know many in town here who'd been looking forward to this past weekend's ride for.... well, let's just say many, many months.

Which brings us back to winter. Maybe we got lazy. Or complacent. Maybe our leaders became infected with a bad case of Big-Eventitis. Whatever. For the last few years, Whistler has pretty much ignored the development of winter participatory events.

That trend was well illustrated last spring with our ill-advised attempt to create a winter TV show for an American audience in late spring. It was like everyone at The BIG Three (RMOW, WB, WT) had parked their brains at the decision-making door. Didn't work. Thank goodness. Maybe now we can devise a more coherent strategy for promoting Whistler's wintertime charms.

Imagine, instead, a winter-launching festival in early December that celebrates all that is cool and life-affirming and exciting and soulful about sliding on snow... at Whistler! Think of it as a kind of Winterlust if that helps. A weekend where everything that we do here in winter — skiing, snowboarding, racing, touring, Nordic, extreme, powder, luge and bobsled even (as well as dryland training, physiotherapy and all the other essential goodies in the winter wellness category) — is highlighted, explained and/or promoted.

We don't tell that winter diversity story enough around here. It's our ace-in-the-hole. Our get-out-of-jail free card. It's the one powerful element that separates us from even our closest rivals. Meaning? A true snowplay lover can do it all here.

And this winter promises even more diversity than usual. With The War In The Callaghan over (at least for now), it appears that skinny-skiers will be able to finally take advantage of one of the most under-appreciated sporting assets in southwestern B.C. Between Brad Sills's longstanding (and utterly stunning) backcountry operation around Callaghan Lodge and the WSL's just-as-impressive Olympic legacy trails, Whistler now boasts one of the premiere Nordic destination areas... in the world!

Why not have a citizen's Nordic-Alpine event during that Winterlust weekend? One day on the Nordic skis, one day on the alpine skis. I don't think any other resort-community could pull it off. We could though.

But let's go even further. Why not have free rentals and free lessons and full-on introduction-to-snow classes for winter newcomers that weekend? Why not give it all away for once? Why not become the pied pipers of winter sports? I mean, somebody has to do it...

Look, it's not like the snowplay business is doing particularly well these day. With the weather weirdness negatively affecting much of the planet's high country in recent seasons, the number of snowsport participants world-wide has dropped precipitously. But can you blame consumers? Winter lasted less than eight weeks in the Alps last winter. Chamonix in mid-March featured daily temperatures of 20C... I was there, skiing in a t-shirt at Grand Montets while it was snowing buckets back home (to put it in perspective, I don't think Whistler saw 20C until early July).

As for Colorado and Utah and California (and Ontario and Quebec and New England), my many contacts there reported they got more biking than skiing in last winter. The result? Most casual participants (and many former hardcores) are starting to lose touch with snowplay. In the once-lucrative Euro market, consumers aren't even buying skis anymore. They just rent them for their annual weekly mountain holidays...

And here's the rub. While Whistler and B.C. have been spoiled rotten on the winter weather front since the 2010 Games (meaning we've had more than our fair share of great snow days), we've done very little to grow the overall skier/snowboarder numbers — either locally or internationally. And that makes our future look mighty bleak.

Surviving at the top of the food chain requires a healthy environment for the many little fish that support the whole feeding edifice. Yet North America's mom-and-pop ski hills — the traditional source of our winter "feed" — are fast becoming extinct. Canada, for example, features less than half the number of ski hills it boasted in the 1960s. Yet our population has nearly doubled!

And all those new Canadians? How do we convince them to give sliding on snow a try? To me it's simple: we have to seduce them.

Now my early-season Winterlust Weekend is just one idea for getting the word out about snowplay. I'm thinking winter-evangelism here, you know a kind of Mountain Chautauqua where true believers come to testify, connect and re-affirm their faith in sliding-on-snow. Where the dilettante can be infected with the zeal of the cognoscenti. Where fun and exhilaration... and anticipation for snow prevail.

So what's your suggestion? How can we make our winter events at Whistler even more participatory, more true to the original Whistler snowplay ethos? I'm keen to hear your proposals. After all, it takes a lot of good ideas to come up with a great one... Don't you think?