When a long creative process finally yields something tangible, I often reflect on critical junctures in that journey. This could be a magazine project or, as is the case this week, the launch of a new book.
Oct 25, 2017 6:00 PM By: Leslie Anthony 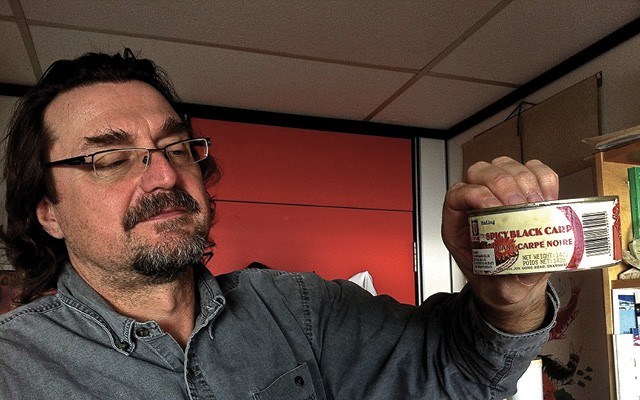 Dr. Nick Mandrak knows all too well that canning carp will not solve an invasion. Photo by Leslie Anthony

When a long creative process finally yields something tangible, I often reflect on critical junctures in that journey. This could be a magazine project or, as is the case this week, the launch of a new book. I had a chance to speak about The Aliens Among Us: How Invasive Species are Transforming the Planet — and Ourselves at the recent Whistler Writer's Festival, but the on-stage discussion of how writers employ fiction or non-fiction to tell particular stories didn't afford opportunity to explore every aspect of this dichotomy.

In fiction, for instance, the heavy lifting is around character creation. Once they're alive on the page, they can take on their own arc; in non-fiction, the characters already exist, and the heavy lifting is around understanding and parsing them in way that serves the narrative. Such was the case with Aliens, where, late in the conception process, a central character materialized — my friend Nick Mandrak, once a fellow graduate student at the University of Toronto and now Associate Professor in Biological Sciences there. Mandark's beat is Species at Risk, and back in 2013, over beer, we were discussing the potential impacts of Asian carp entering the Great Lakes.

"Invasive species rank second only to habitat loss as a major driver of extirpations and extinctions," he told me. "But if you asked a member of the public in the U.S. or Canada what they thought the biggest threats to Great Lakes biodiversity were, they might say pollution or habitat loss."

That such a pervasive, binational issue remained so generally invisible was perhaps unsurprising. As Mandrak reminded me of the Lakes' history, neither a century-long battle with sea lamprey, current problems like zebra mussels, nor even the occasional tabloid-worthy piranha fished from Lake Ontario (true story — I saw it) had impacted public consciousness enough to add "Do Not Introduce Nonnative Species into Native Waters" to the ledger of things you taught children — and fishermen. In fact, if tuna-sized silver carp didn't have a bizarre predilection for leaping clear of the water at the sound of a boat engine (e.g., bit.ly/2gqGyhM), current public knowledge concerning such threats might be even lower. I knew I needed a guide, a sensei of some sort to get this across. Mandrak was the guy, and the byzantine story he led me into formed one of the book's core threads.

Silver carp (Hypophthalmichthys molitrix) is one of four species referenced by invasion scientists under the rubric of "Asian carp(s)." The remaining trio — a taxonomic mouthful — comprise bighead carp (Hypophthalmichthys nobilis), grass carp (Ctenopharyngodon idella), and black carp (Mylopharyngodon piceus). The more familiar (and pronounceable) common carp (Cyprinus carpio) — also native to Asia and introduced widely in North America — isn't included; not only because it's now naturalized on this continent, but because the others form a de facto cultural unit.

Known as the "Four Domesticated Fish" in China, silver, bighead, grass and black carp are that country's most important freshwater collective for food and traditional medicine. Though all attain sizes in excess of 40 kg and a metre in length, each is physically and ecologically distinct. Respectively feeding on phytoplankton, zooplankton, aquatic vegetation, and molluscs, the tetrad was originally imported to the southern U.S. in the 1960s to control weeds, algae and parasites in scenarios ranging from waste-treatment to aquaculture. Lodged in ponds along the Mississippi River, each was introduced into the wild on numerous occasions, particularly during repeated heavy flooding of the early 1990s. Silver, bighead and grass carp made their way up the Mississippi watershed as far as Minnesota; black carp, with a predilection for deeper water, stuck to the main channels of the Central Mississippi. The spread of silver and bighead carp was slow to start, but once dispersed sufficiently northward, an ecological inflection point was reached that radically increased spawning success: around the millennium, populations of silver and bighead carp exploded. On a few notorious stretches of the Illinois River, that meant 60 per cent of all individuals and over 90 per cent of fish biomass. Straining up to 20 per cent of their body weight in food from the water daily, these filter-feeding machines weren't just messing up an ecosystem, they were becoming it — their abundant waste contributing to algal blooms and excessive turbidity.

Biologists immediately fretted over the possibility that this piscine juggernaut would enter the Great Lakes, whose heavily compromised ecosystems were already vulnerable.

But wait, the Mississippi drains into the Gulf of Mexico and not the Great Lakes — so why the concern? Well, there wouldn't be, Mandrak noted, were it not for the Chicago Area Waterway System (CAWS). Not only does CAWS control the flow of water around metropolitan Chicago, but its ageing locks offer a critical direct link between the Mississippi and Great Lakes basins, making it a focal point in the battle to prevent aquatic invasive species moving between the two.

Their continued spread throughout the Mississippi basin would see them reach 31 states and 40 per cent of the continental United States — a bona fide freshwater disaster. But the big question remained: could Asian carp be kept from the Great Lakes?