Alta states: A mountain is a harsh mistress 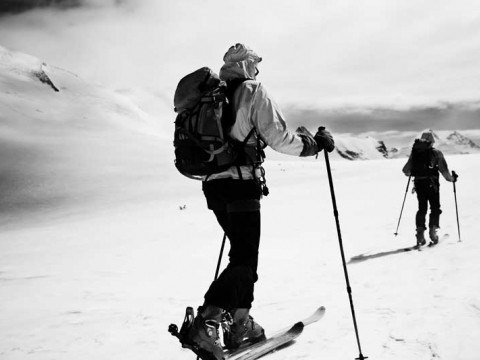 "We lost one of the best people ever to walk the earth."

I spent a lot of time in the backcountry this winter. Don't know why exactly. Maybe it was the Olympic hoopla and all those blue Smurfs invading our slopes. Maybe it was the claustrophobia I felt at living in a virtual concentration camp for two months. Maybe it's just that I got tired of sitting in the Peak lineup for an hour and a half for one good powder run. Whatever. The more time I spent climbing to earn my turns, the better I felt about life...

Still, there wasn't a moment I spent out there when I wasn't conscious of the dangers inherent in taking responsibility for myself in the mountains. Every climb, every descent, every rest stop even - there was never a time that I consciously let down my guard. No matter how bombproof the snow felt, no matter how low-angled the descent appeared to be. I knew that the sleeping dragon lying just below the surface could wake at any time. And with devastating consequences.

But the sublime pleasures of seeking your own path up and down the mountain - of spying new peaks and new routes in the distance, of sharing magical moments with like-minded partners miles away from civilization, of tearing into lunch on a high crest on a lonely mountain top, of dropping countless vertical feet in untouched powder while the sun drops slowly on the western horizon - well, it made the risks that much more bearable.

I was fortunate this winter. For all the miles I logged offpiste, for all the questionable decisions I made (and we all make lots), I survived avalanche season unscathed. But others weren't so lucky.

Two deaths hit me particularly hard this winter. One struck really close to home. The other reminded me yet again how often it seems that "only the good die young."

I first met Ifor Thomas nearly 30 years ago. He was my youngest brother's friend - a kid who'd grown up in Jasper, Alberta with a fierce love for outdoor sports. But more than that even. He and my brother seemed kindred souls.

Over the years, Robert and Ifor would form an adventure partnership that others in the backcountry community would speak of with awe. World-class kayakers, the two men pioneered new paddling routes from the foot of Mt Robson all the way to the Arctic Ocean. In winter, when the rivers froze, the duo would turn to ski-touring and explore the local mountains with glee. Theirs was an enviable friendship.

Based out of Clearwater - the gateway to stunning Wells Gray Park - the two men raised their families with the kind of small-town values that seem almost anachronistic today. Paddling, hiking, camping, cross-country skiing - they did it all. And it seemed to work just fine for them. As for income (always an issue in the upper Thompson Valley), that was never a problem. Ifor and his wife shared duties as village physicians. They knew everybody in Clearwater. And everybody knew them.

Over the years, I was fortunate enough to share my own adventures with Ifor. One outing stands out in particular. It was a beautiful blue-bird day in early March and I was in Clearwater visiting my brother between assignments. I can't remember why exactly, but Robert wasn't available that day to go ski-touring. But he really wanted me to get a taste of his "backyard," the Trophy Mountains. He suggested I call Dr. Thomas.

I couldn't have picked a better guide for such an outing. It was almost like he was waiting for me to call. "Meet me at my house in half an hour," he said. "The skiing is going to be fantastic today. You'll see, we'll have a great time."

But first we had to get there. We ratttled over a dozen miles of logging roads in his old beat up pickup truck, ran the last few uphill miles in his "vintage" snowmobile and finally were able to strap on our climbing skins and head up into the alpine. The day was magnificent. The skiing was superb. As for the company, it was all I could have wanted. The discussion ranged from current B.C. politics to pre-Socratic philosophers, from the advantages of telemark skis over alpine touring skis to the latest and greatest in avalanche safety gear. And when we reached the top of the runs, there was no dilly-dallying. It was straight down to the bottom and back up for another one....

This, clearly, was a man after my own heart.

Ifor wasn't a particularly elegant skier. In fact, I'm not sure he ever spent much time on a commercial ski slope honing his downhill technique. But what he lacked in finesse in made up for with self-confidence. Long and lean - but deceptively strong - Ifor made his telemark skis dance no matter what the snow conditions were like under his feet. The guy was solid. And our outing in the Trophies that day was deemed an unqualified success. I couldn't wait to come back and explore the pocket range even further.

That's why the telephone call this past February caught me so much by surprise. "He's alive," were the first words that my sister-in-law, Liana, was able to choke out. "Robert is still alive. He survived the slide." A long pause. "But Ifor..." She couldn't finish and burst into tears. My heart sank into the pit of my stomach. I knew before she could tell me. Ifor was dead.

Nobody knows exactly how it happened. But on the very run where Ifor had served as my guide those many years ago, he, my brother and another mountain guide friend were caught by a massive avalanche as they were climbing up the slope. No possibility of escape. No trying to ride out the slide. They were like rats in a flooding sewer. All three were buried. Only one paid the ultimate price.

Ifor's death hit Clearwater hard. A tight-knit community, it mourned deeply the passing of such a well-loved character. As for me, I still can't believe B.C. lost yet another great snoweater. I think of him every time I look at the mountains. How could such a beautiful environment, I wonder, be so deadly to those who love it so much?

Jack Hannan's death a month later was even grizzlier. Caught by a freak slide on an exposed slope of Mt Currie, Hannan was pitched over 800 vertical metres of cliffs like a ragdoll thrown off the Empire State Building. He died instantly.

And once again, I wondered: why? Why is it that the good guys always get taken? For make no mistake, Jack Hannan was definitely one of the good guys.

I first met Hannan back in 1998. Still a resident of Crested Butte in those days, he and long-time buddy Jon Johnson were stalwarts on the new big-mountain skiing World Tour. But unlike so many others who had joined the tour for fame and fortune, Hannan and Johnson seemed to enjoy the competitive aspects of the events without getting bent out of shape over the results.

As the tour's head judge for nearly a decade, I heard every complaint and every excuse under the sun from competitors. From Hannan, all I ever heard was: "thanks." At the end of each event, no matter how he performed, he would find the time to get to the judges' table and thank us all personally for our efforts. "You guys have the toughest job out there," he would say. "And the most important. For without you guys, there's no contest." The guy was a class act through and through...

Always a contender - but never really a star - Jack was one of those quiet guys who would always manage to blend into the crowd. He was never the loudest, or the funniest, or even the most outrageous. But put him on the mountainside, and his talents would bloom. He was the kind of skier you always wanted as a wing-man. Never ego-obsessed, or testosterone-fuelled, Hannan skied big-mountain lines for the sheer pleasure of being close to the edge. Closer to god even (however you want to define that concept).

More importantly, he'd fallen in love with B.C. and the Coast Mountains. Along with his wife and adventure partner, Laura Ogden, he'd made the fateful decision to re-locate to Pemberton. He'd even started a local house-building business with buddy Jon Johnson.

Every now and then he and I would cross paths - at the base of the lifts, or on some forest-choked slope, or even far out in the backcountry - and we'd exchange adventure stories. A perpetual grin plastered across his face, Hannan would always understate his own achievements while celebrating mine. I always looked forward to those exchanges. They always meant a lot to me.

And now he's gone. Yet another inspired snoweater who had so much to offer his new home but was taken from our midst far too early. Just like my brother's friend. Goodbye Jack. Goodbye Ifor. Though your lights may be extinguished, your stories live on. May your memories be cherished for generations to come.