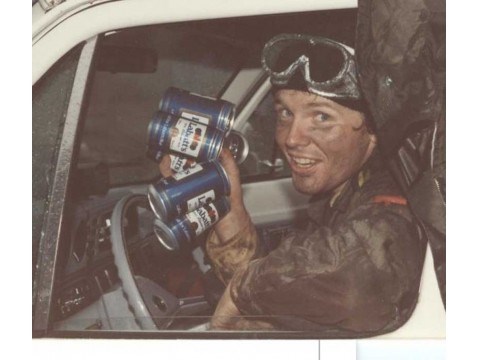 "Discovery consists of looking at the same thing as everyone else and thinking something different."

It's never easy being different. Especially when you're a kid. Although most adults tend to gloss over this fact, young people are ingenious at finding the cracks in their cohorts' facades. And their cruelty can be overwhelming. Fall prey to their teasing and you can forget about a normal childhood. Know what I mean? Human literature is rife with examples of tortured adolescents and unhappy upbringings.

In ski racer Bob Styan's case, life could have been Hell. Endowed with endomorphic genes in a sport dominated by tight-tummied jocks, Styan could have easily let the incessant teasing do him in as a kid. Instead he decided to challenge his peers where it mattered most - on the race course. "After all," says the ever-smiling real estate vet, "it's pretty hard to tease the 'fat kid' when he consistently beats you down the hill..."

Easy enough to say. But building the skill set to actually make it happen is a whole other story. "I worked pretty hard at it," admits Styan. And laughs. "I've never really thought about it before, but I guess I had to develop more discipline than other ski racers. By the time I made it onto the World Cup circuit, I was fit and strong and knew myself pretty well. I knew what worked and what didn't work." He takes a breath. Sighs. "Still... when I quit racing at 23 I didn't have a clue what I wanted to do with the rest of my life."

But Bob had been paying attention. "Jungle Jim [Hunter] told me something about retiring from skiing that I never forgot," he explains. "He said: 'When you come out of ski racing, you're going to be four or five years behind everybody else. So how are you going to catch up?'" A long pause. "At the end of the day," says Styan, "you just have to put your head down and perform. It's all about learning as you go."

And finding the right mentors to help you along the way. "I was blessed," he says. "After retiring from ski racing, I decided to go back to school - SFU to be precise. But a week before courses started, Terry Burns called me up. Turned out Labatt's Breweries was looking for a new ski coordinator for B.C. Was I interested in the job?"

He was. "It was the best job I could have ever gotten," explains Styan. "I made so many good contacts in my three years at Labatt's. I mean, there were a lot of people looking out for me - Burns, Sam Lenarduzzi and Bob McKeachie to name a few. They were really connected guys and immediately took me under their wing."

Much has changed in the ski business in the intervening 20 years. But back in 1983, when Styan first took up with the beer giant, skiing was experiencing a surge in popularity that had lifestyle companies salivating at the thought of being involved with such a youthful and vital activity. And Bob was just the guy to make that connection happen.

"I had a van and a $100,000 budget," Styan tells me. "My job was to travel the province and develop grass-root events with people who supported our products." Another big smile. "I'm still pretty proud of what we got accomplished in those years," he says. "I mean, we created events that are still legendary today."

As in? "Well, I guess the most talked about event we ever did was a race we put on at Whistler. It was called 'Who's The Beef'." He laughs. "It was Larry McKee who came up with the original concept."

The idea was simple. Given that Whistler in springtime was something of a gathering place for Alpine Canada racers and alumni, McKee's idea was to organize a ski race where a gaggle of women formed teams to bid on individual male skiers (mostly former and current ACA members) to add to their numbers. Fastest team down the hill won.

Sounds fairly conventional so far. But McKee's twist was ingenious. For each auctioned ski racer had an orange Glad bag covering his body from head to waist. Only his legs and goggles were shown. "You can just imagine what went down during the auction," says Styan. "It was hilarious. And the women really got into it. It turned into one of the funnest parties of the year." A long easy chuckle. "And the race was fun too."

As fulfilling as the Labatt's job was for those three years, Styan wanted more. "It's like the old saying goes: 'nothing happens in this world until someone sells something.' I wanted to be a sales person. I wanted to sell stuff and make things happen."

And as usual, he succeeded - first as a ski-and-boot rep  ("it was a great way to develop my sales skills," he says) and finally as a real estate guy. "People are so quick to tell you how you can't do something," he explains. "That's what motivates me."

In 1992, Styan passed his B.C. real estate exam and went to work for Peter Dupuis who ran a Remax agency in New Westminster. He never looked back. "I just happened to be at the right place at the right time," he says. "I never imagined where it could lead me. But somehow it all worked out..."

Talk about serendipity. "Vancouver was just at the start of the real estate pre-sale boom," explains Styan. "And we were killing it."

Meanwhile, Dupuis (with colleagues Sid Landolt and Hunter Millborne) had created a new sales and marketing agency - Millborne Real Estate. That's when things got really interesting. "Village North was just being built at Whistler," says Styan. "And somehow our company drew the attention of Trilogy and John Evans. 'Can you come up to Whistler and help us pre-sell some of the new units at Marketplace?' they asked us." He laughs. "We ended up selling 60 per cent of the suites in one weekend! By the time the project was completed it was completely sold out - a first for Whistler!"

Intrawest was also paying attention. "I think it was Gary Raymond who approached us: 'Given your success with Marketplace, do you think you could help us out with some of our other real estate projects?'" Another long chuckle. "And that's how I ended up working with Intrawest at Mammoth Mountain in California starting in 1998..."

For their US work, Landolt and Dupuis had created another company - Sapera. ("Get it?" asks Bob, "Sid and Pete's Excellent Real Estate Adventure.") But Intrawest was so impressed with Sapera's results that they eventually decided to buy the company. "For years, Intrawest had tried to develop their own sales and marketing culture," explains Bob. "But they found it very difficult. Much easier to buy an already established company."

Thus Sapera became Playground in 2000-01. "At first," says Styan, "Playground was exclusively a sales and marketing company for Intrawest. But eventually we started attracting third-party developers."

By now, Styan was working across North America on various Playground projects - from Mammoth in California to Solitude in Utah, from Snowmass in Colorado to Stratton Mountain in Vermont. "I learned so much during those years." He pauses. "For example, I was at Stratton shortly after the attack of September 11 th . It was a really scary time. We thought nobody would be buying. But it was the opposite! New Yorkers were desperate to get out of the city. We sold way more high-end homes than we ever expected to..."

For Styan, there's no secret to success. "It all comes down to a few basic things," he says. "First of all, you need good coaches - people you can trust. Then you need to be willing to learn. Willing to ask questions rather than answer them all the time. After that, it's simply a matter of treating people the way you'd want to be treated. Oh - and don't be afraid to admit your mistakes. Don't worry. You're not perfect. It's all part of the journey." He stops. Takes a long breath.

"If you really want to be successful," he says finally, "you have to embrace adversity. You can't just fold every time you meet a challenge. I learned a lot about that in ski racing. View the tough times as opportunities for learning. And never get complacent. In business like in sport, complacency is the kiss of death..."

Today Bob is back at Whistler and still working as sales manager for Playground. "I guess I must be one of the last holdouts from the original group," he says with a near-giggle. "But after being away for 15 years, it feels really great to be on the Coast again."

There's a sense of place here, he says, that he doesn't feel anywhere else. "Driving up the Sea to Sky Highway, checking out the Tantalus Mountains to the west, watching the Cheakamus River flowing to the sea. It all feels so familiar to me. Whistler is my home. This is where I want to retire."