LETTERS TO THE EDITOR: Reach out if you want Art on the Lake next year, too 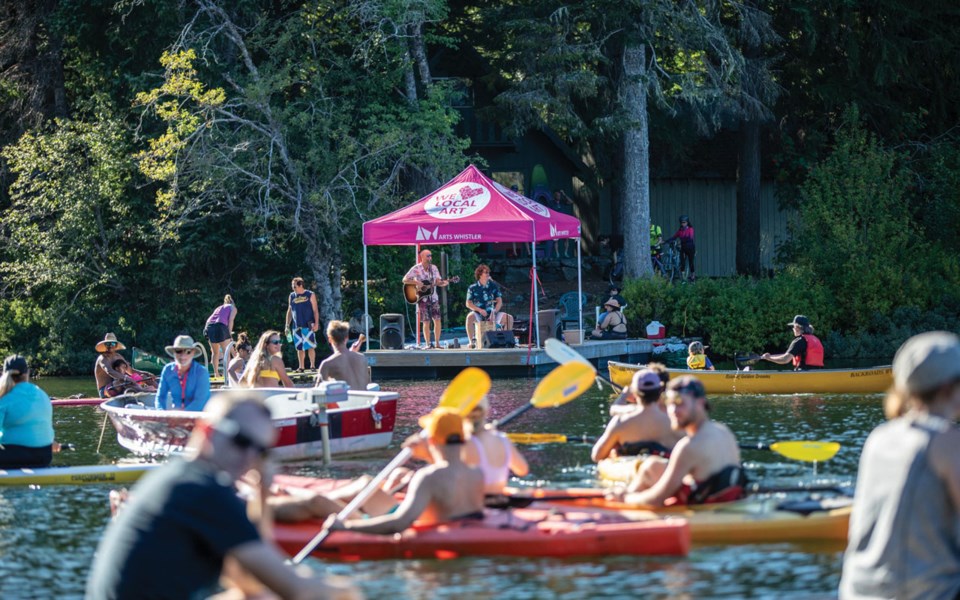 Arts Whistler was thrilled to produce Art on the Lake… literally, on Alta Lake, and was blown away by the community spirit and joy that was apparent on event day, Aug. 27.

With kayaks, canoes, stand-up paddleboards and inflatables, it was great to see so many locals on the water to share in the fun.

A huge thank-you to our participating artists and musicians. The artwork looked spectacular along the lake edges and the music had folks dancing in their kayaks and SUPs, even if it resulted in a few flips into the lake. And finally, a thank-you to [provincial health officer] Dr. Bonnie Henry for granting us permission for the event to proceed.

Hosting an event in the age of COVID took the support of many, including: the Whistler RCMP, which joined us on the water with their safety boat; Whistler Adaptive Sports Program; Captain Holidays; Backloads Whistler; Whistler Eco Tours which assisted us with dock space, water access and gear; and to our Resort Municipality of Whistler friends—Bob, Mercedes, Lorne, Christa, Conor and John—for your assistance, support, advice, permissions and keys to all those gates.

We hope to produce the event again next year. If you attended and would like to share your experiences and your support for continuing with the event, please send us a note to info@artswhistler.com. Community support will help us as we explore funding for 2021.

We love you Whistler!

I am writing to voice my concern over the recent rejection to move forward with the WedgeWoods West housing project.

My husband and I have lived in Whistler for over 15 years. Originally from Vancouver and Victoria, respectively, I can’t say that I expected we’d raise our children here one day. But, when we moved into our three-bedroom townhouse in Cheakamus Crossing in 2010—a purchase made possible for us only because of the Whistler Housing Authority program—the idea no longer seemed so impossible.

We were immediately surrounded by a community of families that were “living the dream” to my 27-year-old self. I distinctly remember watching our neighbours pile into their SUV with their teenage sons and downhill mountain bikes in tow and realizing what a unique opportunity it was to raise a family here.

My husband and I were able to build our careers locally while saving to support a family of our own.

Three years later, in 2013, we welcomed our first son and the appreciation we had for our home and neighbourhood grew immensely. As a new mother living away from immediate family, I felt safe and supported just from opening my front door. My neighbours became a much-needed extension of my family—and our roots here continued to strengthen. Our second son was born in 2016.

We know how lucky we are. Our timing was such that we were not in a desperate situation for housing. Non-market housing was available to those that were prepared to purchase it. We were able to start a family without having to worry about what would happen when our lease was up, if our landlords decided to sell, how we would raise a child in our tiny one-bedroom apartment.

And yet, this is the reality for our friends in the current market, whose timing was not as fortunate as ours.

In the past few years, we’ve said goodbye to many families and individuals that just couldn’t make it work here, as much as they desperately wanted to—active community members worn down by endless waitlists and unsustainable rental situations.

In recent years, we’ve seen enrolment at our local schools drop by unprecedented numbers relative to predictions based on previous years’ birth rates. We’ve seen businesses have to adjust their hours around staffing. We’ve had daycares reduce programming or shut completely because attempts to recruit staff have indicated that people are not willing to move here without secure housing. This in turn has added to another crisis responsible for driving families out of town, but I digress.

Simply put, I am stunned that this proposal was rejected. If sustaining a permanent population within our communities is a priority, I can’t see the sense in this decision.

I am certain that potential residents could provide input on how to address the traffic concerns and lack of walkability. Surely the obvious need for this project far outweighs the presented issues.

I realize WedgeWoods West is not a complete solution to our current housing crisis—but it could certainly be a piece of it. In support of our fellow community members, I urge the board to reconsider their decision to reject this project.

I am a lover of wildlife, and I volunteer and raise money for a variety of animal-rescue associations.

I am writing to express my outrage at the senseless killing of two well-adjusted, non-threatening bears, Huckleberry and Plum, in the Deep Cove area of North Vancouver. These needless deaths have highlighted like never before the need for immediate change in the way wildlife, in particular bears, is handled by all levels of government.

Humans have invaded the territory in which wildlife in Canada have lived and thrived for millennia. It is time for us to recognize that these natural beings ask nothing of us except to coexist peacefully. By implementing the following four actions, government at all levels can eradicate the needless carnage of these precious living beings.

Action No. 1: Make sure that no one is attracting bears. Everyone knows the rules, but many are too lazy to implement them. Bear encounters are not thoroughly investigated because it is so much easier just to have the bear killed.

I am asking for an increase in the fines.

As noted in the recommendations of this report (on page 5): First, the provincial government should improve its internal policies for handling human-wildlife conflict to reflect a more restrained approach to using lethal force and a better understanding of the science of wildlife behaviour.

Ideally, [the province] would pass a regulation incorporating these guidelines in order to make them legally enforceable.

Action No. 3: Hire bear behaviourists who understand bears. Conservation officers are not trained in bear or wildlife behaviour. Before any animal is killed, an expert in that animal’s behaviour must be called in.

Action No. 4: Listen! It’s time! Listen to the bear experts. Listen to the citizens of the districts where bears are being killed. The community is in an uproar, so it’s time to pay attention. The public wants protection for our wildlife from the few negligent humans who won’t obey the rules and common sense.

Train the BCCOS to become true conservation officers, protectors of the wildlife they serve, rather than hunters!