When Europeans vacation on Canada's West Coast, they generally have one thing on their minds: they want to see wild animals, in particular whales and bears.
Jun 14, 2017 6:00 PM By: Leslie Anthony 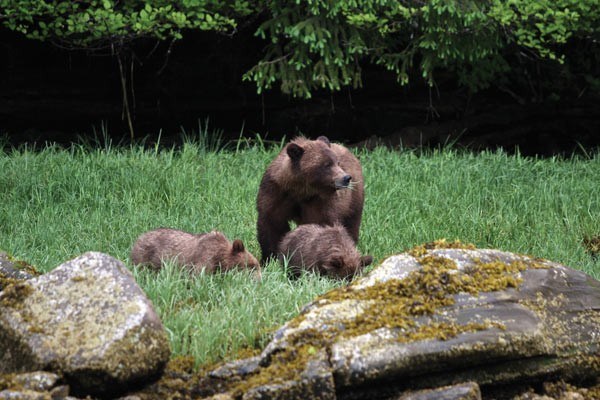 A mother grizzly and her cubs feed on sedges along Khutzeymateen Inlet north of Prince Rupert. Photo by Leslie Anthony

When Europeans vacation on Canada's West Coast, they generally have one thing on their minds: they want to see wild animals, in particular whales and bears. Come to think of it, most Canadians have similar desires when they head north or west in British Columbia. No surprise, then, that a wealth of opportunity exists to do just that — though supply currently lags far behind demand, and the way the province is obliterating forests and habitat, you'd think it hasn't cottoned to the potential bonanza that lies in preserving as much as possible, as soon as possible. But I got a feel for what an expanded, responsible, ecotourism sector in B.C. could look like when I visited Khutzeymateen Inlet and its world-renowned grizzly bear sanctuary. Even as a well-travelled British Columbian, it blew my mind.

A mere 40 kilometres from Prince Rupert, Khutzeymateen (K'tzim-a-deen or "Valley at the Head of the Inlet" in Coast Tsimshian) is a short hop in a classic Beaver floatplane with veteran pilot Ken Cote and his Ocean Pacific Air. The flight can be half an hour if it's socked in and you have to fly around coastal headlands, but with a high ceiling Ken flies direct, aiming across Work Inlet and through a mountain pass where a thousand-metre rock wall looms beside the plane. Ken points out mountain goats, rice grains on the crags below.

In what seems like an eye-blink, we land on the mirror-still inlet and taxi to Khutzeymateen Wilderness Lodge, afloat in a small cove. Some of our crew, who'd visited a decade earlier when the place was little more than a logging barge, are mesmerized by the high-end makeover by new owner Jamie Hahn. Expansion and renovation have created a crucible of classic coastal sensibilities and modern rustic chic in five guest rooms, an airy kitchen and dining area, sauna, and even a fire pit with a covered shelter hung with solar panels. A flotilla of sea kayaks and paddleboards stand ready for guests to utilize when they aren't out viewing bears, orcas and humpbacks in Jamie's large aluminum zodiac.

We lunch on sandwiches and chili, then take to the boat. Through binoculars we spot a bear in the bay directly across from us digging clams, and head there first. Her name, says Hahn, who knows them all, is Hot Chocolate. Apparently she has mated with three different males this spring. In the next bay over, we find one of these Romeos munching on sedges at the high-tide line. A kilometre north, a large female and three cubs are similarly grazing, and Hahn is able to manoeuvre incredibly close. One cub keeps hidden behind a rock, only eyes and ears visible until its mother's lack of concern convinces it there's no threat from the odd creatures bobbing offshore. Hahn abides by rules of engagement for not overly disturbing the bears — 20 minutes tops with each. That's no problem today because as we head up-estuary, we encounter bear after bear in bays and on raised beaches — one of which finally tires of turning rocks for crabs and lies splayed out, belly down, for a snooze on the beach. Seeing bears like this is startling, intimate, a privilege.

Khutzeymateen Provincial Park was established in 1994, the first area in Canada protected specifically for grizzly bears and their habitat. It also represents the first undisturbed estuary of its size protected along the North Coast (note to the province: you should immediately move to similarly protect every remaining estuary). Wildlife is abundant and the topography dramatic — rugged peaks rising over wetlands and old-growth temperate rainforest, with dozens of streams entering the inlet along its length.

In 2008, Khutzeymateen Inlet Conservancy protected further lands to enhance and ensure key grizzly habitat throughout the inlet. As a keystone species, grizzlies depend on a healthy, fully functioning ecosystem that supports a variety of animals, fish and native plants. As they have for millennia, Coast Tsimshian First Nations also depend upon this area for social, economic and cultural prosperity, providing public education explaining their relationship to the area to visitors. BC Parks, the Coast Tsimshian, and the Gitsi'is Tribe collaboratively manage the Khutzeymateen's group of protected areas, whose rich food sources make them home to some 50 to 60 grizzly bears — possibly the highest concentration of the species in Canada.

We log a total of 11 bears — a record for the early season that amazes even Hahn, a former Parks ranger who has seen it all on the North Coast. Inside the door of Kutz Lodge is a tally board with many marks in the bear column, but also a significant number of orcas and humpbacks. We didn't see any whales but there's little disappointment among the group given three hours spent in the peaceful company of grizzlies being grizzlies in their natural habitat.