Brad Sills: Making the most of the Olympic experience 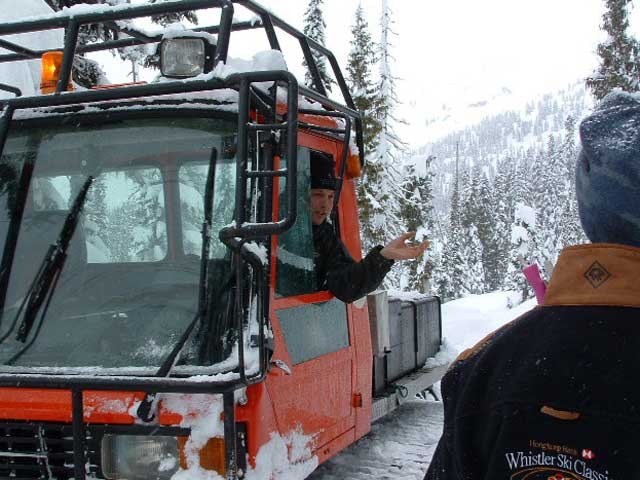 “Be careful what you wish for …”

It was more than 11 years ago that Brad Sills first started on his Olympic journey. Long before Vancouver’s bid for the 2010 Games hit the mainstream radar, years before the process became the plaything of politicians, Whistler’s favourite backcountry entrepreneur had already been bitten deeply by the bid bug.

And it’s a bite, he says, that he’s never quite recovered from…

“It all started back in May of 1997,” recalls Sills. “Hugh O’Reilly (Whistler’s mayor at the time) had called me into his office to meet with a couple of businessmen from Vancouver.” He lets a hint of a smile appear before he continues. “Turns out it was Arthur Griffiths and David Bentall,” he says. “And they had this crazy idea about promoting Vancouver/Whistler as Canada’s candidate for the 2010 Olympic bid. It was the first time I ever heard about it, and to be honest, it sounded like a real long-shot.”

O’Reilly had called in the right man. Since 1981, when Sills and his business partner Nick Slater had first applied to the Crown for permission to operate in the Powder Mountain region, their backcountry ski touring business had evolved from a rough-and-tumble enterprise to a much more sophisticated product. With every season, Callaghan Country — and its ancillary lodge — was gaining new adherents. But Sills knew there was still a long way to go.

Sills is one of those rare human beings who actually walk their talk. Born in St. Sauveur — in the very heart of the Laurentians — Sills grew up on the slopes of Owl’s Head in Quebec’s Eastern Townships. He moved to Whistler in 1973, and spent his early years in B.C. working in the bush for the Forest Service. A charter member of Whistler’s highly-respected Search And Rescue Team — “I consider founder Dave Cathers my mentor,” he says — Sills has probably logged more hours hiking, walking, climbing, riding, skiing (and flying) in the local backcountry than just about any other Whistlerite of his generation.

“This is what really sets us part from the rest of the world,” he says of his beloved Coast Mountain forests. “This is what makes the backcountry experience here so distinctive.” Which is why, he adds, he’s always believed it should play a bigger role in the overall Whistler mix.

He smiles again. “I remember talking with (resort planner) Brent Harley soon after we started our business,” he says. “He asked me what our mission statement was.” A pause. “This is what we eventually came up with: ‘To develop and operate North Americas’ first comprehensive Nordic ski facility.’” In other words, he says, the Callaghan Country vision was always about creating a self-propelled complement to Whistler-Blackcomb’s lift-served product.

“That’s why I got so excited when I first heard the 2010 pitch,” he says. “I mean, I could only imagine the kind of facilities the Olympic bid could bring to the mix. But I was convinced it could complete our mission perfectly… and make the region even more attractive as a multi-sport destination.”

Sills wants to make sure I understand where he’s coming from. “Look,” he says. “I’m not trying to be a mountain guru here. I’m a businessman. And I believe strongly that developing this kind of product is not only a positive thing for Whistler, it’s absolutely necessary.” Another smile. “It’s clear — people are questing for a change. I truly believe nature-based tourism is the future…”

Good businessman or soulful mountain guru, Sills was soon committed to bringing the Olympic Nordic Centre to the Callaghan. In turn, he was also convinced to get personally involved in the bid. “I’m a total cornball,” he says. And smiles. “I admit it: I’m optimistic to a fault. So the idea of hosting something as big as the Olympics easily captured my imagination.”

Sills became a born-again bid guy. He volunteered for one committee. Was drafted to another. Got involved in all sorts of expert panels and boards. Attended endless meetings. Gave hugely of his time and energy. He sighs. Chuckles a little. “I suffer from a strong sense of responsibility,” he explains. “For 20 years we had been touting ourselves as being World Class. I happened to believe that with those bragging rights comes the obligation to demonstrate it. In a more traditional sense, I believed it was a sign of maturity, almost a rite of passage that few mountain communities get to achieve.”

He doesn’t say it. But it’s obvious that Sills carries a bit of a torch for those early years. “After we had won the domestic bid the initiative went into a dormancy phase,” he says. And pauses. His tone of voice changes completely. “When it re-emerged almost two years later, the private sector was out and governments were in charge. A more astute business person might have seen the steamroller coming…”

He sighs. “You know, it would be funny if it wasn’t so sad. We had offered up this exceptional venue — and supported the bid throughout — with the naïve belief that we could be involved if things went well.” He snorts his disgust. It’s hard for him to keep his tone positive. “What followed,” he says, “was six years of the nastiest, meanest, most brutal business dealings you’ll ever want to experience. In the end, the very people who’d nurtured the bid — the ones who really put their soul, their heart, even their resources into it — we’re the ones who achieved the least out of it.”

How bad did the process get? “It even affected my family,” he says. And smiles wryly. “My kids tease me that I’ve been living in Bitterville for the last six years now…”

Sills could be forgiven for having soured on the Games. In fact, it would be totally understandable for him to be cynical and dismissive when the 2010 subject comes up. But nothing could be further from the truth.

“I told you I was a cornball,” he says. And smiles. Suddenly the dark cloud that had been looming over our discussion is gone. “You see, I’m just as big an Olympic booster now as I was 11 years ago when I first started on this journey.” Would he do it all over again if he were given the opportunity? “Of course,” he says, with a bit of a glint in his eye. “It’s got to be better the second time around...”

But seriously? “We’re living in extraordinary times right now,” he explains. “We’re surrounded by truly inspiring individuals: venue managers, coaches, athletes, sports scientists. And all of them are committed to excellence.” To underscore his point, he has one last story for me.

“I was working at the lodge all alone last spring,” he says, “When this whole gaggle of biathletes showed up at the door. Their energy level approached that of atomic fusion. It was obvious that they’d raced up from the trailhead and it was clear that they’d made an exciting outing of it. But what struck me was that there was absolutely no attitude. Everyone was just so happy to be there. Didn’t matter what country they were from — didn’t matter whether they were male or female or old or young — there was a camaraderie among these elite skiers that was truly inspiring. There was a deep bond there — based obviously on shared experiences — but also, I think, on shared values….”

He stops speaking again. Laughs quietly. “That’s when I realized something really important about hosting the Games,” he says. “It’s not about the sponsors, or the licensees or even the politicians; it’s not about the business opportunities or the anticipated profits or the so-called legacies that we’ve been promised. It’s not about any of that crap that surrounds the Game.”

Another timely pause. He continues: “If you’re looking for a return from the Games, the only place you’ll ever find it is in the hearts and souls of the competitors. My recommendation: get to know the athletes this year, many have online diaries and blogs, support them any way you can but most importantly… share their journey! It is this investment that will reap the real reward of hosting the Olympics.”