Britt Janyk: Back where she belongs

The Speed Queens are back in town. You know, those dashing young skiers on the Canadian women's downhill team - Janyk, Vanderbeek, Brydon and the rest. They're all in Whistler this week to attend a critical dryland camp.
Jul 17, 2009 7:44 AM By: Michel Beaudry 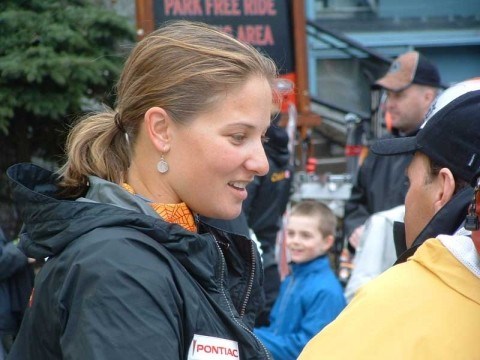 The Speed Queens are back in town. You know, those dashing young skiers on the Canadian women's downhill team - Janyk, Vanderbeek, Brydon and the rest. They're all in Whistler this week to attend a critical dryland camp. And this is one camp where no one can afford to rest on her laurels. For the last few days, they've all been running and jumping and cycling and generally sweating hard to get prepared for what is incontestably the most important season of their collective careers.

It's amazing how a year can change things. Last summer, the Queens were coming off one of the most successful racing seasons in Canadian skiing history. With two World Cup victories and a handful of podiums, they looked ready to set the ski world on fire. Everyone was jumping on the bandwagon. Not so this summer. With zero podiums to their credit in 2008-09, the female speedsters are virtually back at square one.

And the gauntlet has definitely been thrown down. Says coach Rob Boyd: "It's not business as usual this summer. Last season was hugely disappointing for us. We can't afford a repeat. If we want to win some Olympic hardware this winte,r we're going to have to get tougher and make some even bigger sacrifices." Hard words. But certainly not misplaced given his athletes' result-freefall. Adds Boyd: "Speed Queens? They certainly didn't live up to that title last year, did they? Now they've all got something to prove..."

Although their tiaras might be a bit tarnished after last season's dismal World Cup campaign, there are clear signs afoot now that Boyd's charges are ready to make the necessary adjustments (both physically and mentally) to get back to where they were in 2008.

Indeed, some have already made life-altering decisions in their quest to get it just right for that one all-consuming race in February of 20l0. "I'm feeling really good about the changes I've made this summer," says team leader Britt Janyk. "More importantly. I'm really happy about living out west again."

Her mouth stretches into that disarming little-girl grin of hers. And all of a sudden I catch a glimpse of the young teenager who used to rip up the mountain with her brother Michael and their posse of local kids in the mid-90s. It's a look I haven't seen on her face in months. "It's so much fun to reconnect with Whistler again," she explains. "I'm a much more balanced person for it - and a stronger athlete too."

And then she pauses. Tries to find just the right words to use. "Moving back here was certainly the right decision for me," she continues. "I grew up on the West Coast. I have a passion for being in the mountains. You know, playing in big conditions. And I really missed that." She laughs. "I also missed the lifestyle here. I just love coming back and meeting friends who are way more excited about talking of their last big mountain bike ride than about my World Cup results..."

For those who've been out of the loop of late, homegrown Janyk married an easterner five years ago and moved away to Collingwood, Ontario. But things didn't quite work out there like she planned. "I met my husband when I was 23," she says. "And I was married by 24." Another long pause. "At the time, I really felt mature and grown up." Her eyes scrunch up. She smiles sadly. "I never realized I had so much more growing up to do."

Now at the ripe old age of 29, Janyk feels she's back on the right track. "I'm finally learning who I really am. What I want. Where I want to go. And that's truly empowering."

Is her marriage over then? Not quite, she says. But it's certainly teetering. "Things aren't easy right now," she admits. "It's hard for me to tell at this point where it's going to go. Still, I want to stay positive."

As for living in Collingwood, Janyk admits that's behind her - at least for now. "It's a great place," she says. "Ski racing is huge there. People are utterly passionate about it." But that too caused problems for her. "Everyone wanted to know every little thing about my ski career." She sighs. "It never stopped. I was answering ski-racing questions all the time. And that sapped me of a lot of energy."

Britt is quick to qualify her previous statement. After all, she doesn't want people to get the wrong idea. "I'm happy to share and talk about my training and racing - you know, give back to the community and stuff - but I need to learn how to protect my personal space more," she says. "Unfortunately, it's really hard to 'get away' in Southern Ontario. I really missed getting on my bike or my skis and losing myself in the mountains."

Britt admits that last season's racing disappointments (in which she went from a regular podium contender to an also-ran) spurred her to raise some serious questions on how she was leading her life. "I did a lot of reflecting this spring," she says. "I thought about my skiing and how I'd prepared for the racing season. Started wondering if it was all in my head." She eventually realized that a lot of her performance issues last year came down to one basic thing: "I was feeling totally alone back east." Another pause. "I was cut off from everything - and everyone - I cared about. I really didn't have any friends there." And that, she says, made living out of a suitcase all winter virtually unbearable. "Travelling and competing on the World Cup circuit is never easy," she says. "But it's a lot harder to bear when there's nothing to go back home to..."

Fortunately that's no longer the case. "I bought a house in Squamish a year ago," she explains. "And until recently, I was renting it out." A huge smile. "But not anymore. Last Saturday I finally moved all my stuff out of mum and dad's house and into my own home. Leslie Clarke helped me with the move - it took us two full trips to get all my stuff down there."

It's clear that this move marks a big moment in the veteran ski racer's life. "It was so much fun to be making decisions about my own place," she says. "There I was, figuring out which walls to paint, where all my sports gear was going to go." She laughs. "Suddenly I felt like a real adult making real adult decisions."

Being a real adult also means separating somewhat from a very enthusiastic (and, dare I say, controlling) mother. "I'm trying to step away from her a bit more," explains Britt. "Trying to claim my independence." And it's been tough, she says. "My mom has always played a big role in my life. But the process has been great - very liberating in fact. I have more energy in the gym than I've ever had. And that's because I'm really taking charge of what's going on around me."

Other people are noticing the changes too. "I've been spending a lot of time with my sister of late," says Britt. "She was really cute the other day. She told me: 'the person I've been hanging out with this last little while is the Britt I remember growing up with.' And that touched me profoundly. It really validated my recent decisions."

Listening to Britt talk, one could be forgiven for thinking that these great life changes all came about as a result of one season of bad ski racing. But that's not the case at all. "I guess it all started back in '06-'07," she explains. "That's when I started to learn how to make decisions for myself. Started to learn how to use my voice to get what I really wanted."

Still, it hasn't been easy. "I'm a pretty mellow person," she continues. "I'm usually the 'nice girl' in the group. I really don't like conflicts." She stops speaking. Sighs. "But that doesn't always work in racing conditions. I mean, if you really want to be a great ski racer, you have to be selfish sometimes.  And that means not always being so accommodating to others."

But don't worry. Britt is not about to transform herself into some selfish, hard-edged version of the easy-going, approachable gal Whistlerites have always known and loved. Her "niceness" is just too hard-wired into her personality for that kind of transformation to ever occur. Rather, she explains, "my goal is to remain the 'nice Britt' while developing the strength to do what I have to do."

And that, Britt adds, was the crux of the wake-up call she got last winter. "It was a tough season, that's for sure," she admits. "Everyone - coaches, techs, friends, parents - were coming at me with suggestions on how to turn my results around: 'you should do this', 'you should do that'. There was so much noise I could hardly hear myself think. Suddenly a switch went on in my mind. All I had to do was shut off the noise and start listening to myself. So that's what I did." She smiles. "And that's how I ended up living back here..."

With the racing season still nearly six months off, it's far too early to start making predictions. Still, I can't help but feel that by taking greater control of her life, Britt has opened herself to a whole new world of possibilities. Potential gold medals and future Olympic greatness aside for a moment, it's also wonderful to have her part of our Sea To Sky community again. Welcome home Britt!