MUSEUM MUSINGS: Canoeing through Whistler’s past

This coming Tuesday, July 7, the museum will be hosting its first virtual Speaker Series, an adapted version of the talk and film screening with Mike Stein that was originally planned for March.
Jul 5, 2020 9:00 AM By: Allyn Pringle 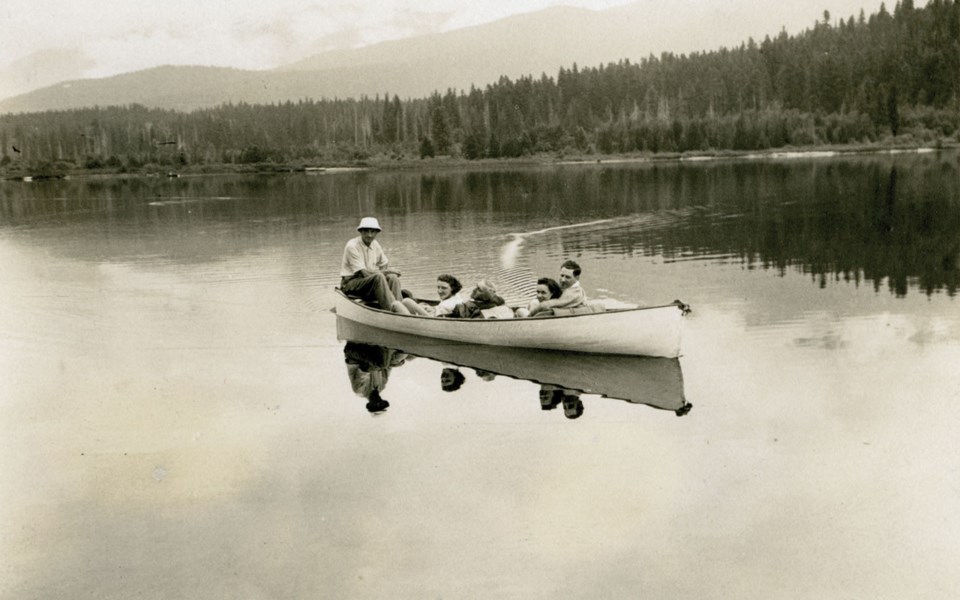 Alex Philip takes Rainbow Lodge guests Sadie Underwood, George Donaldson, Ivan Ackery and an unknown woman out on Alta Lake, despite not seeming to have any paddles. Philip Collection

This coming Tuesday, July 7, the museum will be hosting its first virtual Speaker Series, an adapted version of the talk and film screening with Mike Stein that was originally planned for March. Though Whistler is known internationally as a ski resort, the film features a different form of recreation and transportation that is commonly found in the valley: canoeing.

Canoeing has a much longer history in the area than snowsports, as canoes are important to both the Lil’wat and Squamish Nations. The Great Hall of the Squamish Lil’wat Cultural Centre (SLCC) features a 12-metre long Salish hunting canoe carved from a single cedar tree, which at times is removed from the exhibition and taken on an ocean journey. (Learn more about this canoe and others by visiting the SLCC, which reopened last week.)

The Whistler Museum has records of canoes being used to transport people and products around the valley for more than a century.

In the early 1900s, the Barnfields established a dairy farm on their property at the northeast end of Alta Lake. As summer tourism became more popular in the area following the arrival of the Pacific Great Eastern Railway in 1914, the Barnfields’ dairy began supplying the lodges and visitors with fresh supplies. They used a dugout canoe to deliver milk, cream, eggs, news and gossip to the different lodges on Alta Lake. By 1920 its largest customer was Rainbow Lodge, which had a daily order of 80 quarts of milk, four quarts of cream, and two quarts of table cream.

Rainbow Lodge itself had a number of boats, including canoes, for guests and staff to use for fishing or paddling down the River of Golden Dreams, one of which now resides in the museum’s collection. In 2011 the museum, with the generous support of the Province of British Columbia, was able to purchase a cedar canoe bought by Alex and Myrtle Philip in 1916 for Rainbow Lodge. After the Philips sold the lodge in 1948, Myrtle kept the canoe for her own personal use for the next 25 years. The canoe had aged and, before coming back to Alta Lake, was restored by Dave Lanthier, an expert vintage canoe restorer and member of the Wooden Canoe Heritage Association. The canoe is currently displayed in the Whistler Public Library, as the museum does not have the space to exhibit such a large item.

The popularity of canoeing continued even after skiing came to Whistler. In 1975 canoes represented the water part of the first Great Snow Earth Water Race, with cyclists passing the baton to canoeists who worked their way up Alta Lake to the first weir on the River of Golden Dreams, where they handed off to the runners. From all reports, the canoeing was the most fun for the spectators. According to Dave Steers, “Most of the teams had members who could tell the front of a canoe from the back. A few teams didn’t even have that.” As you can imagine, quite a few canoes tipped and those watching got to see a lot of splashing.

Three years before that inaugural race, Mike Stein, Adolf Teufele, Wink Bradford, Ferdi Wenger and Jim McConkey set out on their own journey by canoe on the Liard River. Teufele captured their adventures in the Grand Canyon, a 20-kilometre stretch of the Liard, on 16 mm film, which has now been digitized, edited, and is narrated by Stein. On Tuesday, July 7, we’ll be hearing from Stein about the film and the journey, as well as screening Highways of the Past: Canoeing the Grand Canyon of the Liard, via Zoom. (Visit whistlermuseum.org/events to find out more about the event and how to register. Space is limited.)