A favourite addition to my backcountry kit in the last year has been—you guessed it—beer. Not a lot of beer mind you (that can wait until I safely return from the backcountry); I just wrap a single tall can in a couple of koozies.
Sep 7, 2019 1:00 AM By: Vince Shuley 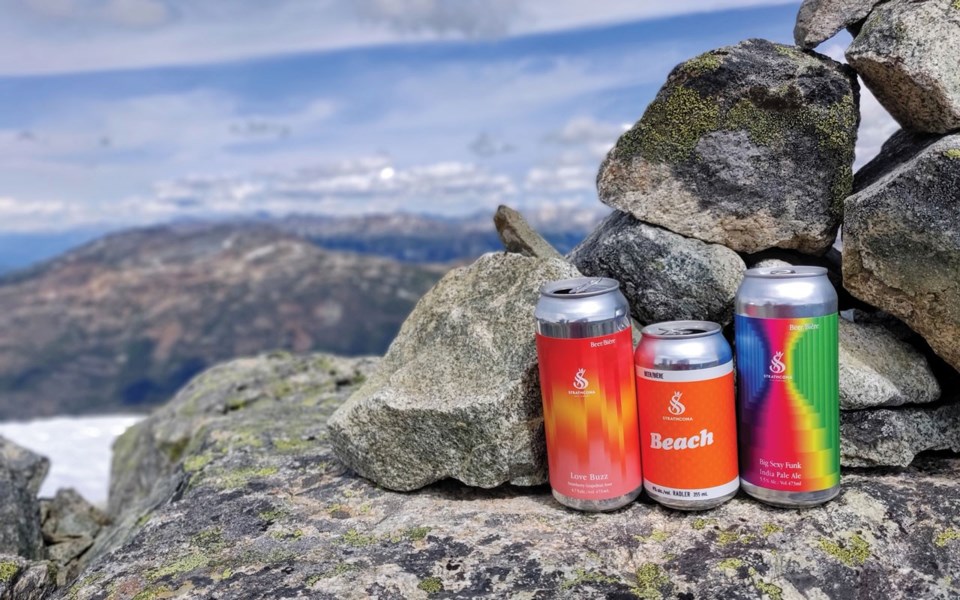 ENJOY OUTSIDE, RESPONSIBLY Strathcona Brewing will be one of 60 breweries pouring the latest trends of craft beer at the Whistler Village Beer Festival next weekend. Photo by Vince Shuley

A favourite addition to my backcountry kit in the last year has been—you guessed it—beer. Not a lot of beer mind you (that can wait until I safely return from the backcountry); I just wrap a single tall can in a couple of koozies. When the party reaches the peak or viewpoint, there's nothing quite like cracking a cold can of craft to wet the collective whistle. But which beer to bring? Crisp and clean? Hop monster? Fruit sour? I'm glad you asked...

The best place to sample your next favourite outdoor beer is at the Whistler Village Beer Festival (WVBF), once again flying it flag above Olympic Plaza for the Main Event (Sept. 14 and 15) with over 60 breweries in attendance. On top of that, there are literally dozens of additional events taking place at venues all over town leading up to the Main Event. The standouts I've pencilled into my Whistler Beermas week are Craft Cultures: Sea, Land Sky at the Audain Art Museum (Sept. 10), Cask que C'est at the Brewhouse (Sept. 12) and Master Crafters: Haze Craze at the Longhorn (Sept. 13).

So who's all coming and what are they pouring? That list is too long for this column space, so I made some calls to local breweries and the Gibbons events team to help give you beer fans the gist of it.

"We let the breweries pour what they want or what they think is going to be popular," said Jonno Pilcher, Gibbons' beverage operations manager. "The weather the last few years [at WVBF] has been cold and rainy, when the darker and heavier beers tend to do well. It will be interesting to see if the breweries bring refreshing styles like fruity sours in anticipation of the warm weather we see at our other summer beer festivals."

Craft beer trends are a sticky point for some brewers. Do you jump on the bandwagon and make it a sure thing? Or do you stick to your guns and brew what you want?

"If it's a trend beer year, I usually won't make one. For example, there was recently a trend of 'milkshake' beers (brewed with lactose), but I avoided that because it can upset a lot of beer-drinking stomachs with aversions to dairy. Also, the last couple of years it's been all about hazy beers. I try to clarify my beers as much as possible so as to not be trendster, but there's such a demand for these hazy, low-IBU (International Bitterness Unit) IPAs. It's what people want right now, and I want to give them what they want."

High Mountain will be pouring a lemondrop pilsner and a hazy IPA. Grab the last of Derrick's oh-so-tasty raspberry wit at the Brewhouse now before it's gone.

"The word that kept coming up at the 2019 Craft Brewers Conference in the U.S. was 'crisp.' People are getting back into their easy-drinking beers, the pilsners and lagers are experiencing a bit of a renaissance and breweries are experimenting with new hop varieties and things like barrel ageing. Another thing we've been seeing on the consumer side is that craft beer is pretty devoid of brand loyalty. People have their favourites but they're always looking to try new beers. The single-can model, where you go up the fridge and create your own four-pack, is only going to get more popular."

Coast Mountain will be pouring Magic Carpet IPA (back by insatiable demand) and a surprise variation on its summer favourite, Juice Box Sour Wit.

"We don't get too caught up in what's trendy. We make beers we want to drink and what our vocal community is asking for. We can't ship beers all over the province like some of the other breweries, so we really need to pay attention to what the locals want. Squamish likes the diversity and drinkability and enjoys having a new beer on tap every few weeks. But you can brew a bunch of different styles of beer and still have the brewer's signature shine through in those beers."

"Sours have become very popular and we've done them from the beginning. We find they're always better with fruit, providing you get the combinations right. Hazies are here to stay, for sure, but I think goses are really gaining traction during the warm summer months. For the upcoming winter, we're probably going to try making our darker beers with non-traditional ingredients, be that fruit, botanicals or a salted version, something like that."

Pemberton Brewing is planning on pouring its summer sensation Barb's Nice Pear rhubarb pear sour (don't miss that one) and their Ship It hazy IPA.

"Our fastest growing beer style is fruited sours, for sure. The other thing we've noticed is that people are digging the lower alcohol—but heavily hopped—session IPAs. People want the taste of an IPA but to be able to have a second one before carrying on with the rest of their day or evening. Our inspiration for beers involves a lot of travel to see what other brewers are doing down in the States and then coming home and experimenting or trying to replicate them."

Backcountry will be pouring their Case of the Mondays peach, guava and pineapple sour and the double dry hopped pale ale Suck it Trebek, which has been renamed Suck it Cancer (since Jeopardy! host Alex Trebek's diagnosis) and will be part of a cancer fundraiser.

With breweries packaging more and more of their small-batch beers in cans, there's no longer a reason to compromise on taste when enjoying a few suds off the beaten path. Find your next outdoor refreshment of choice at the WVBF, which runs from Sept. 9 to 15.

Vince Shuley enjoys beer (mostly) in moderation. For questions, comments or suggestions for The Outsider, email vince@vinceshuley.com or Instagram @whis_vince.