Children are fighting for their future—we must support them 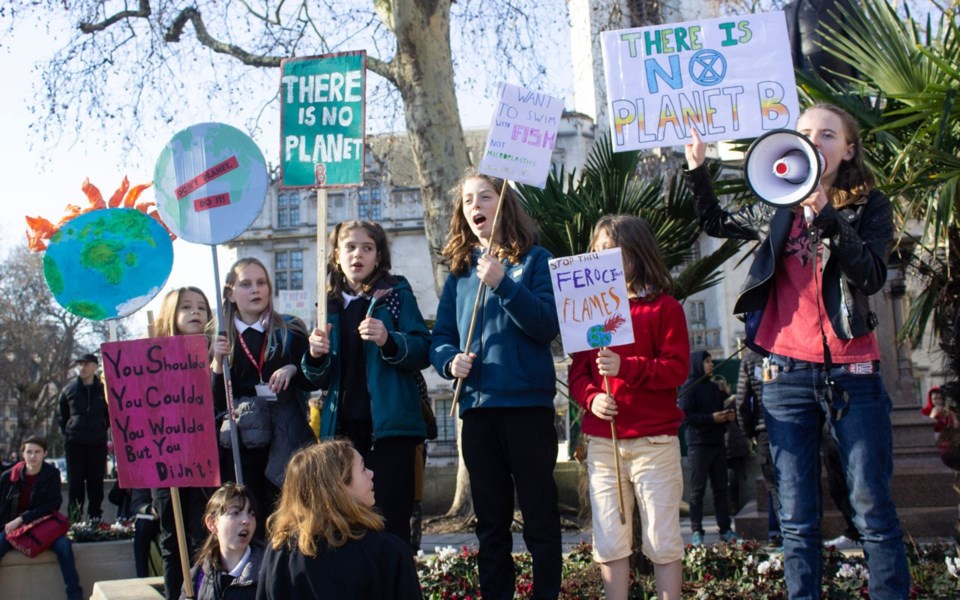 At 16, Greta Thunberg may not be a little child, but she's showing tremendous leadership. The Swedish student has galvanized a world movement, pressing adults to remove the blinkers of corporate and political self-interest and recognize that their refusal to respond appropriately to climatologists' urgent warnings is leading to the destruction of a future for all generations to come.

Children don't have a large stake in the status quo so they aren't bound by the constraints of business and politics. They aren't yet part of it, except as budding consumers and victims of political machinations. Children speak from their hearts with an innocence, naiveté and idealism only they possess.

For decades, environmentalists calling for government action to transform our energy sources from fossil fuels to cleaner renewables have been marginalized as unrealistic, extremists or anti-business. Even activists have imposed self-restraint in our calls for political action lest we be seen as a threat to jobs, corporate interests or the economy.

Thunberg's laser focus is on what politicians are doing (or not doing) rather than saying. And what they're doing is refusing to take the necessary actions outlined in the Intergovernmental Panel on Climate Change's special report in October. It warns that failing to substantially reduce greenhouse-gas emissions over the next 11 years will put humanity—and numerous other species—on the road to catastrophe.

The United Nations established the IPCC in 1988 to be the most authoritative source of scientific information on climate change, compiling research from scientists and experts worldwide to inform governments and the public of the current state of scientific knowledge. Because it's intergovernmental, its reports are vetted by countries like Saudi Arabia, the U.S. and Russia, which have their own agendas. This makes the reports invariably cautious. Every IPCC prediction (temperature, sea level rise, weather events) over five-year periods has fallen short of what actually occurred.

In 2015, the world—including Canada, which emerged after almost a decade of government denying the issue—committed to keeping global average temperature from rising more than 1.5 to 2 degrees Celsius above pre-industrial levels. To environmentalists' cheers, Prime Minister Justin Trudeau called for keeping to the lower 1.5-C limit.

The IPCC's special report noted the planet has already warmed by 1-C and warned that exceeding 1.5-C warming would cause climate chaos. To avoid that will require a 45-per-cent reduction in emissions by 2030 and 100 per cent by 2050. It's a shocking wake-up call. To achieve such a target in a short time means adhering to international commitments on the scale of a world war. Using carbon pricing to reduce emissions, encouraging electric vehicle purchases, installing LED lights and other actions, while important, will not keep us in line with the IPCC target.

In 1988, climatologists were convinced that humans were contributing to global warming, mainly through burning fossil fuels and destroying carbon sinks like forests and wetlands. Their understanding of the physics behind global warming had become increasingly robust since at least 1824, when French scientist Joseph Fourier discovered what would later be called the "greenhouse effect." To avoid catastrophic climate change, scientists led by NASA's James Hansen recommended a 20-per-cent reduction in emissions within 15 years of 1988. Had the world taken the threat seriously and acted, we could have avoided the crisis we're in today.

Instead, the fossil-fuel industry and its supporters in media, government and "think tanks" campaigned to deny or downplay the threat. Rather than slowing fossil-fuel development and investment, they accelerated it, determined to get the last bit of value out of the resources before markets confronted the reality of climate disruption.

Despite the urgency of the crisis, governments, industry and banks continue to invest in and expand fossil-fuel infrastructure and development, and emissions continue to rise. "We aren't going to get off fossil fuels overnight," they say, while making few attempts to get off them at all.

Children, inspired by Thunberg, are telling adults their future is at stake. Those who believe short-term economic gain is more important than protecting the biosphere on which all life depends are betraying them and all children.