Climate protection is not a partisan issue

Media and politicians often regard environmentalists as a special interest group with political priorities served by "green" parties.
Jul 20, 2019 12:30 AM By: David Suzuki 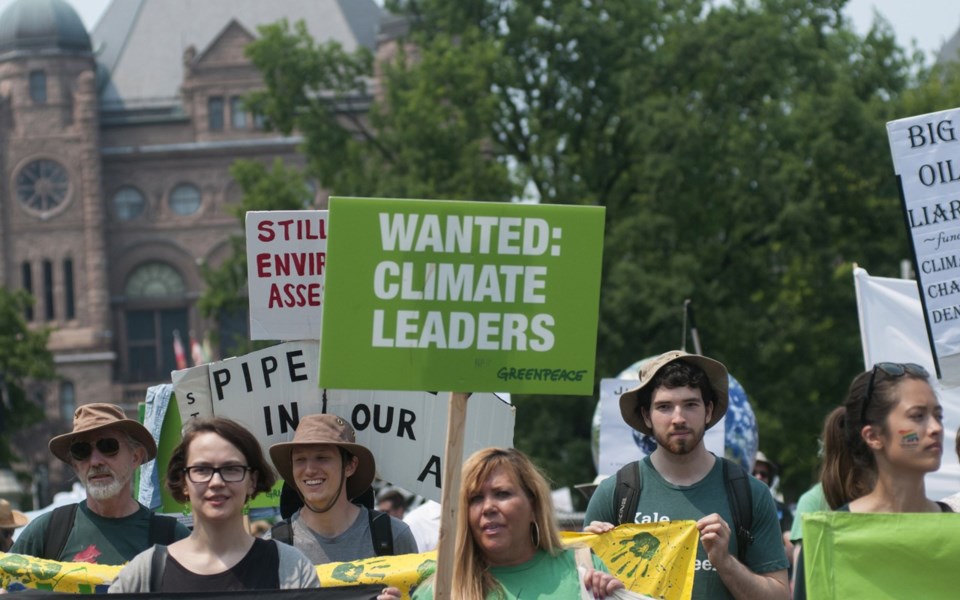 BIPARTISAN ISSUE Columnist David Suzuki thinks it absurd to believe an issue like climate change belongs to any one political party. A climate change protest in Toronto, Ont. is pictured. shutterstock.com

Media and politicians often regard environmentalists as a special interest group with political priorities served by "green" parties. If a Green politician isn't present or allowed to participate in a public debate, journalists tend to eschew environmental questions, considering them the purview of the absent party. It's absurd to think an issue like climate change belongs to one party. It should be the highest priority for every politician and candidate and should receive daily media attention.

All parties should have policies to protect life-sustaining air, water, soil and biodiversity and to encourage renewable energy. Those of us who prioritize these factors are not like opera, rodeo or car-racing buffs, yet that's how we're often perceived.

In November 2018, the Intergovernmental Panel on Climate Change (IPCC) released a special report, a gauntlet thrown to challenge all humanity. If we don't reduce fossil fuel use by almost half by 2030 and 100 per cent by mid-century, climate chaos could destroy the underpinnings of civilization, including food and agriculture, coastal communities, ocean productivity and the global economy. This is not a Green issue; it's an urgent challenge confronting all people. We can't ignore it as we head toward a federal election on October 21.

Global warming affects everything and everyone. United Nations groups dealing with immigrants and refugees worldwide can't cope with the masses of people leaving their homelands. As ocean levels rise and flood heavily populated areas; heat waves, drought and weakening monsoons destroy agriculture; pest outbreaks ravage forests; and changing ocean currents and temperatures transform marine ecosystems, tens of millions of people will be forced to seek liveable asylum. Climate change and its solutions must be addressed by all those concerned about immigration and refugees. The repercussions for Oxfam, Red Cross, Doctors Without Borders, Amnesty International and so many other organizations will amplify in coming years.

For years, medical professionals and health organizations have warned that climate change will exacerbate consequences such as cancer, heart disease, respiratory problems and spread of illnesses like Lyme disease, malaria, Zika and dengue. A recent report in The Lancet points to the urgent health consequences of climate change.

Canada's recently revised food guide acknowledges climate impacts. In a radical departure from the meat- and dairy-dominated guides of the past, it indicates that a primarily plant-based diet is not only better for our health but reduces the risk of climate change.

Global warming affects almost everything in our lives and the biosphere. It's not a special interest touted by enviros or the Green Party. It's a crisis for all humanity. The bar set by the IPCC report is challenging, made worse in Canada by almost a decade under a government that didn't prioritize climate change. If we accept the goal of a 45-per-cent reduction in greenhouse gas emissions by 2030, we have to start on it immediately and on an enormous scale. This is a challenge for us all and must be the highest priority for every party. We shouldn't let any candidate for office avoid discussing climate risks.

The U.S. response to the 1941 Japanese attack on Pearl Harbor was not weakened by partisan bickering or debate over how serious the consequences would be, how much could be afforded or how the response would affect the economy. The country was united in its resolve to win the war. That's how we have to respond to the greatest threat to survival humankind has faced.

Once the challenge is seized, opportunities will open up as we transform society's energy foundation. As U.S. author and business consultant James Womack said, "Commitment unlocks the doors of imagination, allows vision and gives us the right stuff to turn our dreams into reality." It's time to dream big.

David Suzuki is a scientist, broadcaster, author and co-founder of the David Suzuki Foundation.