Community and branding – A missed opportunity for WB 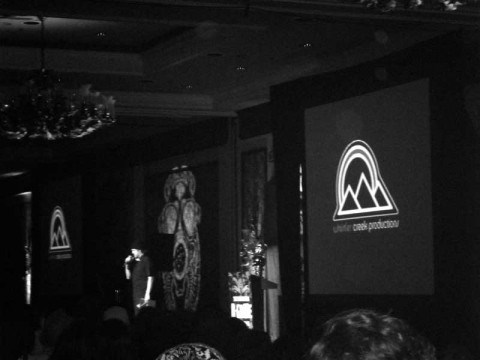 I haven't been out much in the last six months. What with my wife's murder and being a single dad and trying to make sure there's money in the bank to pay the bills, getting out in the evenings for some diversionary activities quickly falls to the bottom of the "must-do" pile. Besides, I'm usually just too tired to go out.

Know what I mean? I'm getting old dammit; I just don't have the stamina that I once did for late night celebrations. Still, I couldn't pass up on Travis Tetreault's invitation to attend Heavy Hitting Films' eight annual B-Grade Horror Fest last Friday.

And even at that, it was a very qualified invitation. "Are you sure you're up for this?" Travis asked me with true concern in his voice. "There's a lot of gratuitous violence, you know. And after everything you've been through, I'd hate for you to get upset over this." I assured him I'd be okay. Told him that I was actually looking forward to it.

It's not that I get off on horror. I don't. In fact, you'll never see me at any of Hollywood's silly vampire or living-dead or slasher flicks. They stink. But then, these days I find most of what comes out of Hollywood stinks...

For me, the real point of attending Friday's event was all about immersing myself in local culture. Setting the question of political correctness aside for a moment, what Chili Thom and Feet Banks and the rest of the Heavy Hitting crew (with big help from local producer Stuart Andrews this year) have come up with is such a compelling affair that they have no problem stuffing 1,000 young Sea-to-Skyers into one of the Chateau's usually-cavernous ballrooms for a night of absurdist, crazy, inconceivable, funny, gross, hilarious, disconcerting, troubling, exciting - and ultimately satisfying - film viewing.

The concept is simple. Put a 10-minute movie together, liberally sprinkle it with inconceivable plotlines, wanton violence, bare breasts (plus the odd penis cameo from time-to-time), mix it all in with a post-modern wink to the audience (we're all in this together, right?), and voila, you're ready to compete. The crowd is vocal and the rewards are substantial. In addition to sizeable cheques and in-kind donations from a variety of local sources, the winner of the night gets to showcase his (or her) film at Whistler's own Film Festival later this month. Not so shabby, eh?

And for Whistler's fast-burgeoning filmmaking community - as master-of-ceremonies Banks mentioned a number of times, all the usual suspects were in attendance - it was a wonderful incentive to put something together that would catch the judges' attention. Still, I really wasn't there for the movies. For me, the event was just an excuse to get out and interact with some of Whistler's most colourful (and vivacious) inhabitants.

I mean, any event that counts artist-about-town Chili Thom, multi-media master Stu Mackay-Smith and long-time filmmaker Tetreault among its judges is sure to attract an interesting cross-section of Whistler's in-crowd. And on that front, the B-Grade Horror Fest delivered on all my expectations. Traditionally the kick-off to Whistler's wild and wacky Halloween festivities, the Horror Fest was a showcase of costumes (both imaginative and tasteless; innovative and tacky) and personalities (ditto).

So what's my point? I'm not going to lie and tell you that the event was tasteful. It wasn't. If random nudity and gratuitous violence offend you, this would have sent you over the edge. If absurdist humour doesn't turn your crank, then you would have probably remained stone-faced all evening. But it was fun. Really fun. Remember fun? We once had a lot of fun events in this town.

Friday evening was strange that way. Maybe I'm in a mood to wax nostalgic. Maybe it's because of my recent conversations with so many old-time Whistlerites. Whatever the reason, the Horror Fest sent my mind reeling into the past - to a time when just about EVERYBODY had fun at Whistler.

Remember the Freakers' Ball? I do (even though I probably shouldn't). A highly-celebrated costumed event, the annual ball was yet another excuse for Whistler's randy young population to get together, ingest all sorts of illicit substances, and have a great time partying late into the evening. People would spend weeks preparing their costumes. Countless stories - both outlandish and romantic - would come spiralling out of each ball. New relationships would be created on a look and a wink; old ones abandoned on a whim and nary a backward glance.

But the Freakers' Ball was just one of many crazy local parties in those days. Whether it was the insane goings-on on the Victoria Day long weekend - from wine-soaked pig-roasting on the top of Whistler Mountain to mandatory attendance at the Mt. Currie Rodeo - or the just-as-celebratory Mouton Cadet race-cum-party in the 1980s and '90s, Whistler's reputation as a crossroads of the universe for young people was built just as much on the valley's uninhibited social scene as it was on its great skiing.

But is that the case today?

"Everything is getting so serious," irrepressible party convenor Ace Mackay-Smith told me last year. "You put on a ski event these days and it's all about sponsors and prize money and photo ops and professional athletes. There's no slush cups or restaurant races anymore, stuff that's just for fun."

She shrugged. Pulled a stray strand of blonde hair out of her eyes. "I mean, what are we doing here exactly?" A long pause. "We're sliding down snow on slats of wood and plastic," she answered with a giggle. "How serious is that?"

Indeed. Which made me really sit up and take notice when the always-profane Feet Banks introduced the resort sponsors for this year's Horror Fest: Big White and Silver Star. I'm not making this up. There it was, splashed across three screens. "We approached Whistler Blackcomb," the night's inimitable MC told the murmuring crowd. "But they weren't interested. The folks at Big White sure were though." He cackled (Feet does a great cackle). "So we went with them." The anti WB boos were long and loud...

Now it wasn't that long ago that Whistler Blackcomb's reputation was built on the word-of-mouth ravings of twentysomethings. Back before the Olympic campaign, in the bad old days when Whistler was just a big mountain with a small town attached, it was the young adepts who created the buzz about this place. Whistler was their town. The Sea to Sky valley was their home, their playground, the place where most of them had parked their hearts. And no amount of paid advertising could ever match that kind of passion.

But today? Not so much, I guess. What with growing up and becoming part of the Olympic family and having big shows to promote like the Ski and Snowboard Festival, little things like supporting local culture (as politically incorrect as it may be) quickly fall by the wayside. "Just goes to show you," I overheard a young spectator comment to his girlfriend. "The WB guys are so out of touch with the local scene they probably don't even know what the Horror Fest is all about."

I know. I know. Times are tough in the mountain resort business. And with the desperate financial demands of a struggling owner, there's not a lot of extra marketing cash at WB to cover such frivolous events as a schlock film fest for local wannabe movie-makers.

Still, there's got to be someone somewhere in the marketing hierarchy who understands the strategic importance of being seen as supporting an event like this one. I mean, gawd!, letting Big White splash its logo all over a groundbreaking, made-in-Whistler party like the Horror Fest is tantamount to letting Kitzbuehel splash its Hahnenkamm logos all over our downhill. Know what I mean?

This is how Stuart Rempel explained WB's decision not to be involved: "We can't sponsor everything that's put in front of us," he said. "Our major marketing and sales focus is creating awareness and getting guests to visit Whistler this year and into the future." And then he went on to present a long list of initiatives that they did sponsor.

Big boss Dave Brownlie was even more blunt. WB can't do it all, he wrote me. Besides, he added, "...people and businesses in our community use Big White and anyone else to try to leverage us."

I understand that. And I feel for them, I really do. But it still begs the question: why would an aggressively-branded family resort like Big White want to be involved in an "underground" Whistler event that features dismembered body parts and erect nipple shots in the first place? Simple. The Big White marketing crew had done enough of their homework to know that just about every one of those 1,000 young kids in the room was a rider and/or a snowboarder and would be making kids of their own in the next few years. You do the math.

As Stuart Rempel concluded: "It may have been a miss for WB not be involved in the B-Grade Horror Fest this year, but we will be sure to look at the opportunity for next year." Fair enough. But it sure sounds to me like he's closing the barn doors after the horses have escaped...