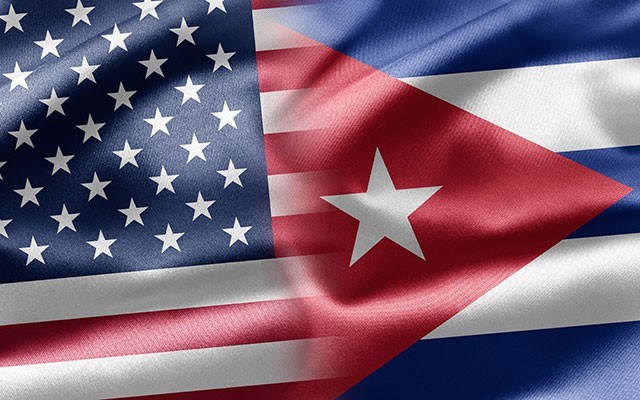 1) The U.S. attempt to bring down the Castro regime by isolating the country economically and diplomatically is now 54 years old, and it still hasn't worked. To go on doing the same thing and expect a different result next time is a clear indication of stupidity, and possibly of insanity.

2) President Obama, as a "lame duck" president with only two years to go, has nothing to lose by re-opening the American embassy in Havana and loosening travel restrictions on American citizens. He gets credit for being both bold and sensible, and he can do it by executive decision without having to go through Congress.

3) A quarter-century after the end of the Cold War, there is ample popular support in the United States for ending the long and absurd anti-Communist crusade against Cuba. According to an Atlantic Council poll early this year, 56 per cent of Americans now back a more direct U.S. engagement with the Castro regime, or even full normalization of relations. Among Hispanic-Americans, the number rises to 63 per cent.

4) Even in Florida, where the Cuban-American population is concentrated, the heat has gone out of the issue. The aging leaders of the community, who arrived as refugees from Cuba half a century ago, still resist closer U.S. relations with Cuba, but the U.S.-born generation wants to end the war. The same Atlantic Council poll showed that 79 per cent of voters of Cuban descent in Florida supported increased engagement or normalization.

Unfortunately, there are also two powerful reasons why Obama's good idea is not really going to change things much.

1) The Republican Party now controls both Houses of Congress, and the embargo cannot be ended except by Congressional consent. That will not be forthcoming.

2) The brothers Castro are still in control of Cuba, and even if they were both swept away by some random illness, the only slightly younger Communist Party leadership will not make the kind of concessions that could force the Republican leadership to change its position. In terms of maintaining the status quo, the U.S. Republicans and the Cuban Communists are "objective allies."

It makes political sense for Republicans to oppose Obama's initiative: they have no interest in allowing him a victory that they have it within their power to thwart. Republican Senator Marco Rubio of Florida vowed that he would do "everything in my power" to keep the embargo in place — and also threatened to block the confirmation of a U.S. ambassador to Cuba and prevent funding for construction of a U.S. embassy in Havana.

If this sounds petty, well, yes it is. But considering the attitude of Congressional Republicans towards the Obama administration over the past six years, massive obstructionism towards any future policy of Obama's seems virtually guaranteed. The embargo will remain.

As for President Raul Castro — elder brother Fidel, now officially retired, seems largely out of play — he has no intention of presiding over the end of Communism in Cuba.

Cuba's economy is in terrible shape, and it has recently been made much worse by the steep decline of the Venezuelan economy due to the collapse of the oil price. Given how dependent Cuba has become on the generosity of the leftist Venezuelan regime, you might think that Castro would now be seeking economic salvation in the form of an improvement in U.S.-Cuban relations. You would be wrong.

I have visited Cuba about every five years for the past three decades, usually as a journalist, but once, in the early 90s, I took my entire family, including a baby and my elderly parents-in-law, so they could see what the last remaining Communist regime outside Asia looked like. The Soviet Union had just collapsed, ending the generous Soviet subsidies that had kept the Cuban regime afloat for decades.

The place was a terrible mess, and people were truly desperate. There were early teen-age prostitutes of both sexes working the streets, and my parents-in-law got mugged twice in one week in central Havana. On the second occasion, the senior officer at the local police station held my father-in-law (the victim) hostage, allegedly as a "witness" in need of medical attention, until I bribed him $100 to let him go.

Cuba has been through worse economic crises than the current difficulties, and the regime survived. It did so because, unlike the European Communist regimes that fell in similar circumstances, nationalism works for the Cuban regime, not against it. Maybe some serious change will eventually come out of this initiative, but certainly not before the end of 2016.