It's always fascinating to hear people talk about the major influences in their lives. Some speak of their friends and buddies. Others cite their parents.
Mar 25, 2011 6:44 AM By: Michel Beaudry 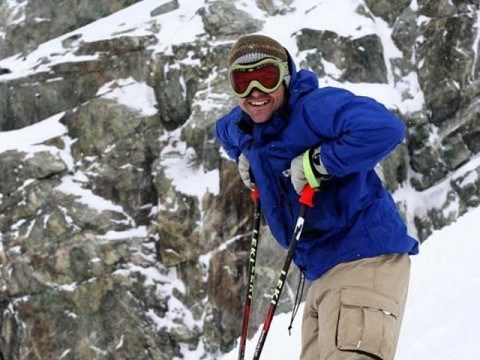 It's always fascinating to hear people talk about the major influences in their lives. Some speak of their friends and buddies. Others cite their parents. Still others mention a particular teacher or coach that really turned their head around while they were in school. Few these days trace it back further than one generation. Seems like members of the post-modern set have forgotten all about their "deep" past.

But not Dan Wilson. A thoroughly post-modern Whistlerite - with a research job at Whistler's Centre For Sustainability to prove it - Wilson is one of those rare old souls who isn't afraid to step outside the strictures of conventional wisdom (no matter how recently implemented) in order to better understand the world around him.

Husband, father, athlete, full-time worker - and hard-wired Snoweater - the 36-year old is pretty much exactly where he wants to be in 2011. Yet Wilson is quick to give the credit for his successful ski lifestyle to his maternal grandfather.

In fact, when I approached him a few months back to do a story with me for this column, all he wanted to do was talk about his grandfather - a Manitoba sports legend - and how his positive outlook on life and outdoor activity had touched him deeply.

So I googled him. And sure enough, Doug Groff was a stud. A multi-sport athlete, Wilson's grandpa was an allround kick-ass skier (as well as a champion paddler). This is what they said about him on the Manitoba Sports Hall of Fame website: "In skiing, Groff won provincial championships in four different events: downhill in 1935, slalom in 1935-36 and 1938-39, jumping in 1936 and 1939, and cross-country from 1937-40. In 1940, Groff was a member of the three man team which made the first ski ascent of Mount Athabasca in Alberta and in 1944 he led a 40 man group which made the first winter ascent of Mount Columbia."

Impressive stuff. Particularly given his home province's relatively flat geography. But that's exactly the point, says Dan. It's not about the size or steepness of the mountain or even its depth of snow in winter. It's all about getting outside to play. In summer like winter. In good weather like bad. "That's what my grandpa was all about," he says.

He stops for a breath.  Smiles (and I can easily see the physical resemblance to his august forebear). Dark features and subtly muscled body - not big or tall by any means - but quietly strong. Competent too. As far as behaviour goes, he's totally approachable, almost easy-going in temperament. Still, you can't mistake the fire in those eyes for complacency. Passion. Drive. Honesty maybe. But lazy? Never. This is a guy who delivers on his promises...

"My grandfather had such a zest for life," continues Wilson. "So much enthusiasm for playing in the snow." And then he laughs. "It totally transferred onto my mom and dad and then to us."

Dan's love for snow-playing is palpable. And it doesn't really matter what the conditions are outside. Numerous are the times when he and I have crossed paths on a nasty-weather day or on a long hike to a remote peak. "I still get such a buzz from the mountain," he says. "And now that I'm a dad and teaching my own kids - it's even more fun!"

Dan was born in Toronto and spent the first 12 years of his life there. "My parents made every possible effort to diminish me and my brothers' hockey skills," he says with laughter in his eyes. Say what? "Yeah - they took us out of the city whenever they could... and skiing was our main activity then. " More laughter. "It's amazing when I look back and see how much family time skiing gave us. I really appreciate that now."

The Wilsons decided to move back to Manitoba in 1987. "My parents had had enough of the Toronto lifestyle," he says. But he admits it was a pretty rough transition. "It was so darn cold..." Not only that, he adds, the hills were even smaller than those they'd left behind in Ontario! Still, there was an upside. "We were closer to the Rockies..."

And Dan and his two brothers took full advantage of that fact. "My mom had been a school teacher," he explains. "But she was always the first to encourage us to take a day off and go skiing."

He notices my surprise. "I'm serious," he says. So keen was she on outdoor pursuits, he tells me, that she actually encouraged her two oldest boys to drive out to Banff for multiple ski "long weekends." "Can you imagine?" sputters Dan happily. "She thought it was safer than hanging out in Winnipeg and getting into trouble."

Another deep breath. "It was crazy you know. There we were in this tin-box VW Van - my brother, myself and two friends - heading for the Rockies with my mum's CAA card and a bunch of down sleeping bags in the back to keep us warm. Such adventure..."

Dan was hooked. The mountains were where he wanted to be. But there was still this small thing called "getting an education." "After high school I was accepted at the University of Victoria," he says. "I was still competing nationally in windsurfing so it seemed like a good compromise at the time." He started in a recreation program but ended up getting a degree in tourism and commerce.

"It was perfect," he tells me. "I went to school in the fall and taught skiing at Whistler in the winter." He sighs longingly. "Funny, you know, I was just thinking back to those years - 1992-93. One of my fondest memories from that time: finishing teaching for the day, grabbing something at Cookie Co. and zipping up the mountain for a few runs in the alpine." Another chuckle. "Life was simple back then."

Like all newcomers, Wilson suffered the slings and arrows of first-time Whistlerites. "It was all so exciting," he says with just a hint of a smile. "Getting suspended for having too much fun, finding myself down to my last dollar, having a roommate disappear with the next month's rent..." But those were merely details. "I was really lucky to have the kind of passionate mentors in those days that made life at Whistler so enjoyable."

Anyone in particular? "Well, Dave Perry stands out. He was the kind of leader who wasn't afraid to take risks - and he'd back you all the way when you pushed the envelope. He was a really inspiring leader that way."

Wilson should know. For soon after graduating, the young keener was hired by Perry to work with the then-nascent Whistler Blackcomb marketing and sales department. "My first job was selling bulk tickets to Vancouver businesses," he says with a self-conscious grin. But that wouldn't last. A month and a half later, he was offered the job of sales coordinator for the Schools-On-Snow program. "It was like coming full circle," he says. "My mom had run a program just like this one when we lived in Toronto..."

He admits he became a bit of a preacher for the program - at least internally. "I totally believed in what I was selling - and I still do. It's great for the kids, great for society, and really great for the ski industry."

Meanwhile, Wilson was getting turned on to The Natural Step approach and the writings of Brian Nattress. Which led him directly to a four-year stint as sustainability coordinator at the Fairmont. "I worked for Dave Roberts there - another super-passionate community guy." He stops speaking for a breath. "But wow! Hotel corporate culture was so different. Forget morning powder sessions. It was totally career-driven."

When Roberts left Whistler, Wilson too decided to move on - this time to Sweden and a Master's degree in Business and Environmental Management. "It was an 11-month program," he explains. "And there were 29 students from 22 different countries there! What an eye-opener that was...what an incredible opportunity to learn and grow."

Which, I guess, explains his current job at Whistler's Centre for Sustainability. "I really believe that environmental success can also be translated into economic success and that economic success (especially here in Whistler) depends on a strong community and a healthy environment," he says with the fervour of the born-again. And the work he's done with various B.C. communities has convinced him that this can actually happen. "My main job these days," he says, "is to facilitate conversation among community members. And that's where it's got to start. We have to talk with each other. Honestly and reasonably. Find out what really matters to us. And how we can work together to make it happen..."

He sighs. "It's the only way we're going to get anywhere. I mean, sustainability isn't just a theory, you know, it's a way of life."