Then indecision brings its own delays, And days are lost lamenting over lost days. Are you in earnest? Seize this very minute; What you can do, or dream you can do, begin it; Boldness has genius, power and magic in it.
Jan 28, 2011 7:09 AM By: Michel Beaudry 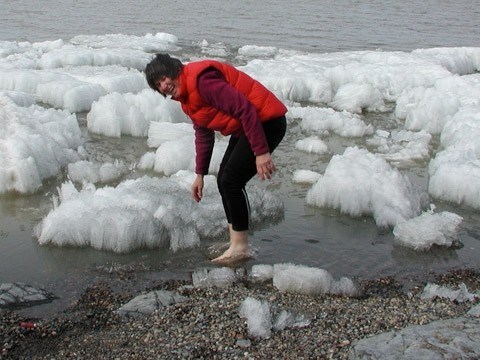 Then indecision brings its own delays,

And days are lost lamenting over lost days.

Are you in earnest? Seize this very minute;

Boldness has genius, power and magic in it.

I don't think Pemberton's Delores Los has ever suffered a minute of indecision. A perpetual whirlwind of positive energy, the lifelong outdoor-ed teacher seems to have had her personal compass set on "carpe diem" since she was a young farm girl growing up in south-eastern Alberta in the 1950's. As for obstacles, they just don't exist for Ms. Los. Her unassuming boldness - and utter fearlessness in the face of adversity - delivers the very genius, power and magic that most communities are begging for today.

Doubt my words? Just head down to the Callaghan Nordic Centre any weekday this winter and watch her in action. There, amid laughing school kids, bewildered teachers and appreciative parents, the 60-something dynamo oversees a new learn-to-ski program whose overwhelming success is reflected each day in the ear-to-ear grins on participants' faces.

But don't expect conventional answers when you speak with her. "A lot of people tell me: 'you can't control kids when they're outside,'" she says. "But what I've found is that you don't 'control' kids. You engage them. When kids are engaged in an activity - really engaged - they don't get in trouble." She pauses for just a beat. "At least that's been my experience..."

And she's had a few in the years since she left the family farm. Whether as a wet-behind-the-ears CUSO volunteer in 1970's Nigeria or as an emergency teacher parachuted onto an isolated stretch of the Labrador Coast - whether starting an outdoor school on the northern tip of Vancouver Island or working with kids at risk in North Van - Dolores Los has seen the good, the bad, the heartbreaking and the unspeakable. And yet, she's as enthusiastic about mentoring kids today as she was when she was taking her Phys Ed degree at the University of Alberta four decades ago.

Consider the school program she helped launch in the Callaghan this year. As a 2010 Games volunteer and a longstanding Nordic skiing enthusiast, Delores totally immersed herself in the Olympic experience - so much so that she opted to retire from teaching rather than struggle with time conflicts. When the dust had cleared and the athletes had all gone home, she decided to stay involved with the new Nordic Centre and see what she could do to contribute to the legacies program there.  Turns out a lot.

"Well," she says, "it all started when the Whistler Legacy Society and Cross-Country BC received a grant to start a school learn-to-ski program in the Callaghan." She stops. Takes a breath. "So I volunteered to contact all the elementary schools in the Howe Sound district and sell them on the program." She offered to do it, she adds, "because they all knew me. I just had to convince a few key individuals and the rest kind-of fell into place..."

Likely story. I figure there must have been a few twisted arms along the way. But she insists there wasn't. "A number of people told me that this would be really hard. But it really wasn't. Schools are desperate for these kinds of programs. They just want to be re-assured that they're safe and properly run."

I'm sure there are more than a few Alta States readers whose kids have already tasted of Delores' pedagogic magic. If not, here's one mum's assessment: "She is bringing such a wonderful spark into my world," says Pemberton resident Carolyn McBain. "She has taken me under her wing as a rookie jackrabbit coach - which is a lot of fun for myself and my six-year-old daughter. It's amazing how she makes climbing hills, falling on your face and whacking yourself with your skis so much fun for these young athletes..."

When it comes to sports and sports teaching, McBain is no slouch herself. But it's clear that she considers Delores' skills on a whole other level. "She has so many fun ideas up her sleeve," she enthuses, "that the training always goes way into overtime! The sky is the limit for Delores!"

Did I mention that the Pemberton Jackrabbit cross-country program that Delores helped launch 28-years ago is still going strong today? Stronger than ever, she adds. "We now have 89 local kids in that program. We don't have any room for more skiers in fact!" I can tell by her tone just how proud she is of "her" kids. "We've won gold medals at the BC Winter Games, placed skiers on the B.C. provincial team - one of whom was my daughter - and generally been a force to contend with on the local race circuit."

Here's another little factoid for you. If it weren't for Dolores and her ability to "liberate" skis and poles and boots from the Board of Education for use on Saturdays and Sundays - "they were just sitting there in the Outdoor School collecting dust on weekends," she says - that program might never have gotten off the ground in the first place.

But as usual, I'm getting slightly ahead of myself. How the heck did such an outgoing woman end up in Pemberton in the first place? What wild and wonderful travel path led her from the hardscrabble farming grounds of southern Alberta - "we didn't even have electricity when I was growing up," she informs me - to launching and running a successful outdoor school program in sea-to-sky country?

"Growing up on a farm in the '50's," she says, "I didn't know much about skiing. But our nearest neighbours - they lived a couple of kilometres away - were Norwegian and they had skis. So in winter we would go over to visit and they would let us use their gear." She laughs. "There's a lot of wind in that part of the country so the snow drifts got huge in winter. It took a lot of skill to get through those drifts on skis..."

Fortunately, she says, school offered other sporting possibilities. "Rural kids like us were bussed to school. Going home for lunch was not an option. Instead we played basketball and volleyball at lunchtime - with the teachers volunteering their time as coaches."

For talented youngsters like Delores, making a school sports team was huge. "It was our only chance to travel," she says. "But it also really built up our self-esteem." And then she laughs. "Farming kids are strong. I mean, when you milk cows every day, holding a volleyball or a basketball is pretty easy." She lets a moment pass. "That's when I learned that you didn't have to be rich or from the city to be a good athlete."

One of only two kids in her graduating class to move on to university - "I decided to go because my brother went," she admits - Delores travelled north to Edmonton in the mid 1960's and became roommates with an Australian speed-skater whose cross-training turned out to be Nordic skiing. "So that was my second initiation to skiing," she says. And it was a lot smoother than her first. "We would ski along the city's river trails," she says. "It was great."

Thirsty for new experiences - "I wanted to taste as much of life as I possibly could," she says - Delores spent her university years studying in Edmonton but working and travelling across Canada during the summers. But by the time she'd graduated - and even after a year of post-graduate studies in education - she still wasn't sure she was ready to settle down.

"I was looking at this bulletin board one day," she recounts, "and there was an ad for a CUSO teaching job in Nigeria." On a whim she decided to apply. "This was just after the Biafran war," she explains. "Around 1970 or so. The country had been devastated and the kids were just coming back to school. There was nothing there - no equipment, no facilities. But they were so keen to learn - so very, very hungry for education -- it almost broke your heart..."

She admits she shed a lot of tears in the first six months. Frustration. Helplessness. Fear. Anger. She says she ran the gamut of emotions. But in her inimitable way, Delores eventually decided that she might as well just get on with the job and see what she could accomplish. She wrote her mum for used sports gear. Tried her best to make do with what was around. But it was on Nigeria's Independence Day, when she heard the governor of the province talk about sports and society, that she made her biggest breakthrough.

"I figured I had nothing to lose," she tells me. "So I wrote the governor and asked for help." What she didn't expect was the enthusiasm of his response. "Suddenly there's a 400-metre track being built in the back of our school," she says, the surprise of that 40-year old initiative still strong in her voice. "I even received money from the governor to buy track shoes for my girls!"

Delores spent two years in Nigeria. "Some of the happiest people I've ever met were Nigerians," she tells me. "And they had nothing!" Although she loved her students and had grown to feel comfortable with the African way of life, her heart was already set on her next challenge. She wanted to teach outdoor recreation. "I had already been accepted at two US schools and I knew I had to leave." She takes a long breath. "But it was a terribly difficult decision. Leaving Nigeria was like leaving my family all over again..."

Next week: Delores returns to Canada, moves to BC, meets her future husband, and like a sporty Johnny Appleseed, starts planting outdoor school programs across the West Coast.