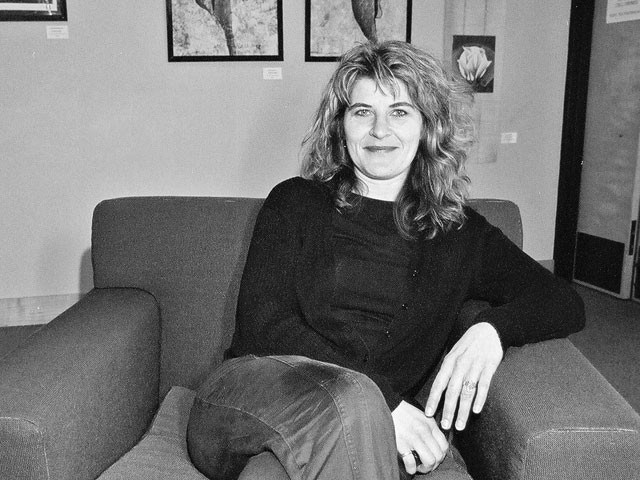 Note: Pique publisher Kathy Barnett was a role model for young professional women everywhere — but particularly here in Whistler. A highly-skilled business exec — yet one whose heart was full of compassion and good will — Barnett successfully navigated the corridors of power here without ever losing her sense of humour or her vision. Kathy loved Whistler. And she loved Whistlerites. Though her death has rent a huge hole in the social fabric of this community, her life should be celebrated for all the richness it brought us. Indeed, Kathy embodied much of what is most exciting and progressive about the strong-willed women of Sea-to-Sky country. This story is dedicated to her.

World Class? Don’t even mention those two words to Doti Niedermayer – unless of course you want to see her roll her eyes. “For years, I’ve listened to people in this province say ‘we want to be world class’,” declares the tough-talking executive director of the Whistler Arts Council. “And that drives me nuts! Why? Because I find that those two words have become meaningless. World class doesn’t mean building more stuff. It’s about style and substance — creating a unique identity for yourself that distinguishes you from the commonplace.”

She sighs. “It’s a real challenge to get people to understand this concept,” says Niedermayer. “But it all comes down to one thing: there’s a huge difference between ‘world class’ and ‘merely expensive’.” Then she laughs, a throaty, textured laugh that hints at a fully engaged life. “For example, when I go to Paris, it’s not to visit the Eiffel Tower. It’s to bask in that distinctive culture that only Paris can offer. It’s the people, their culture, their art. Yes, some of the streets are dirty. And yes, some buildings stink of urine and garbage. But that’s Paris. It’s a living city with a heart and a soul. And that’s what makes the place so appealing!”

It’s a subject, says Niedermayer, that should be addressed more often at Whistler. “Don’t get me started,” she says, with a slightly hard-edged gleam in her eye. “I could go on all day about our misplaced priorities.” And then she decides to change tacks.

“Aspiring to a healthy lifestyle — physically, psychologically, spiritually even — means giving certain things up,” she says. ‘And that’s a reality our community really has to get its head around. You can’t have it all! You have to decide what’s important in life — and then you have to live with the consequences of your decisions.”

Another pause. She wants to make sure I understand where she’s going with this.

“For example, if we spend all our funds on creating hugely expensive buildings and then have no money left over for programs to fill these buildings, what does that say about our community?” She answers her own question: “Building more stuff will never replace building more culture. In the end, it all comes down to one thing. It’s not necessarily the structures that makes a place world class, it’s the substance!”

She’s been described as dynamic, tireless, bold, forceful — pushy even — an outspoken champion for her constituents, in short. But the German-born Niedermayer is a woman of conviction. Perhaps it’s her background. Perhaps it’s her family. But whatever it is, the woman whom many in this valley credit for raising the profile of the local arts scene to new (and hitherto unimagined) heights doesn’t shy away from addressing issues head-on.

“I was born in Munich,” she recounts. “My mum and dad were keen mountain people. Hiking, skiing, touring — we did it all. In fact, we all started skiing at a very young age.”

Her family immigrated to Canada in 1969. “We moved to Vancouver when I was seven,” remembers Niedermayer. “I was in grade 2 and didn’t know one word of English…”

Her father, an artist and writer, wasn’t comfortable in the big city however. “He wanted to live in the mountains and still be an artist,” she explains. “So when he heard about Banff and the School of Fine Arts there, he decided to move the family once again.”

His then 12-year-old daughter was not happy with that decision however. “I felt totally uprooted,” says Niedermayer. “To be plucked out of my exciting big-city life in Vancouver only to be dropped into this little mountain town did not work for me at all.”

Insisting that she could do her own way, Niedermayer returned to Vancouver at 17 for a brief stint before realizing that what she really wanted to do was travel. “So I moved to Europe, and didn’t return to Canada ‘til I was 26. And that’s when I found my first ‘arts job’.” A grin spreads across her face. “I knew right away that I belonged there. I’d found my people.”

It was a major epiphany for the young traveller – and a major lifestyle change. “I’d run a bar before, held a few corporate jobs, but I hadn’t yet found my niche,” she says. “This was different. This felt right.”

For the next ten years, Niedermayer immersed herself completely in the Vancouver arts scene. “I had my community and my contacts,” she says. “I had a good reputation and worked very, very hard to become the most creative manager/producer I could be.” But by 1998, she’d had enough. “I hit the wall,” she says simply. “I just couldn’t do it anymore.” And then she laughs. “I missed the mountains…”

In true Niedermayer fashion, she woke up one day and decided to move to Nelson. “I had no job, no prospect and no money. But it didn’t matter. I knew it was going to work out.” And work out it certainly did. “I found a job the first week I was there with the West Kootenay Regional Arts Council,” she says. By the second week, she had two jobs. “Living in Nelson was a great experience,” she tells me. “The arts scene is really well established. But after four years there, I realized I was too young to settle down in Nelson.”

That’s when she saw the posting for the Whistler job. “I had reached a point in my life where I was pretty comfortable with myself,” she says. “I wasn’t going to fake it just to get the job. No pretending! If they were going to hire me, they’d hire me for who I was.”

She got the job. Slightly surprised but keen to get started, the new boss of the Whistler Arts Council moved here in the spring of 2002. “It certainly wasn’t the Whistler that my parents had introduced me to in the 1970’s,” she says. “I was definitely left-wing at the time. The fancy homes and yuppie lifestyles really put me off at first.”

But that was before she discovered her neighbours. “My job enabled me to meet a lot of people in the community,” she says. “And I was genuinely surprised by how generous these folks were. Whatever it is they do here — ski, ride, hike, work, play — most of the people who live in this valley love Whistler. And they give tons and tons of volunteer hours to the community. I changed my mind about Whistler — totally! — in no time.”

Niedermayer wasn’t given much of a chance to acclimatize however. “Immediately things started to take off,” she says. “And I said ‘yes’ to everything. Partner with the municipality? Sure! Partner with the province? Why not! Federal government? Bring it on!” She laughs. “Suddenly I had a lot of work on my plate…”

But she insists she wouldn’t have it any other way. “It was all a matter of timing,” she explains. “The hill was established, the houses were built, and the buses were running. In other words, the infrastructure was all in place. All they needed now was arts and entertainment. And I arrived just when that need was made most manifest.”

So how does she feel about her job so far? “I think we’ve succeeded pretty well at raising the profile of the arts here.” She stops talking. Sighs. “Unfortunately, we’ve been less successful in supporting individual artists. Few are on a better financial standing because of us.”

And that, she says, is the council’s next battle. “We have to make sure that we keep our artists at Whistler. And to do that, we have to find ways for them to live here affordably.”

Alas, she admits, this is much easier said than done. “In the city, you can be a struggling artist and live in a rough part of town where rents are cheap. But in Whistler even the rough places cost a lot of money! So what happens to our community when all the artists leave because they can’t find a place to live and/or work?”

Given the seemingly inexhaustible flow of Olympics-related dough, one might be forgiven for thinking that the Whistler arts scene has never been in better shape. But beware, warns Niedermayer. “It all looks good right now. But most of that money is earmarked for entertainment and showcasing Canadian talent during the Games. It’s not about ensuring the long-term sustainability of local artists. Come the end of the Olympics, those funds will be all gone. And we will back at square one — unless we start making plans for the future now!”

It’s what keeps her up at nights, she admits. “Our biggest challenge vis-à-vis 2010 and the Games is finding a way to raise our capacity to move our own objectives forward (i.e. supporting and promoting local artists) while still delivering on expectations from our partners (i.e. the IOC, VANOC, and the federal and provincial governments).

“Both are absolutely legitimate. The tricky part is finding the balance between them…”