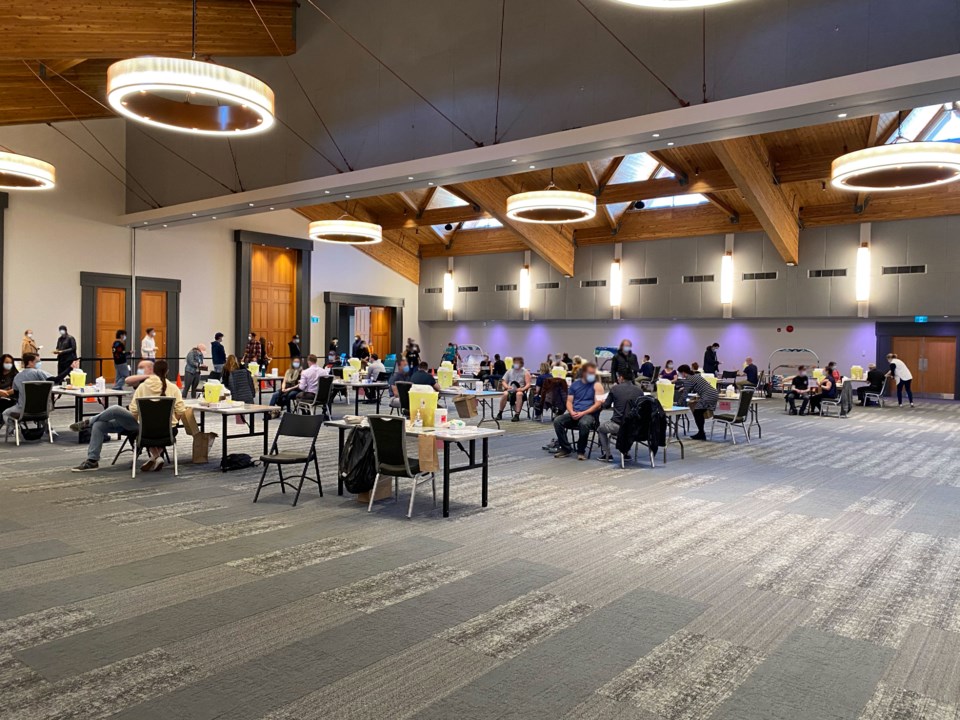 The Whistler coronavirus vaccination clinic is up and running at the Whistler Conference Centre.File photo

On April 11, Vancouver Coastal Health (VCH) did what it should have done weeks ago and announced that a community-wide vaccine program was being launched in Whistler.

Thank you so much.

I have no doubt that people in other places, and some in certain jobs such as teachers, will be upset about this, feeling Whistler is jumping the queue.

But’s let’s put this in perspective.

According to VCH: “From Jan. 1 to April 5, 2021, there were 1,505 confirmed cases of COVID-19 recorded in Whistler. Currently, Howe Sound has the highest rate of COVID-19 of any Local Health Area in the province; the majority of these cases reside in the Whistler community.”

We know the cases are already higher in the resort than this last report from a week ago Monday—VCH cannot get updated stats to meet Pique’s deadline. We know that up to a dozen Whistler firefighters are either sick with coronavirus or self-isolating, and it’s only a matter of time before it is the teachers, the transit drivers, and other backbone-of-the-community occupations that are impacted.

If we use this VCH statistic of 1,505 cases, that means for Whistler’s population of nearly 14,000 (Statistics Canada 2020) 10.79 per cent of the population has been infected with coronavirus this year to April 5—and the spread is continuing.

Let’s put that in context: If we were the the Greater Vancouver region as described by the BC CDC, that would represent 269,750 COVID-19-positive people from Jan. 1 to April 5. (This region’s actual caseload so far is 77,344.)

So you can see the rate in Whistler is more than twice what it is for the whole of the GVRD—that includes Surrey, which alone accounts for 26,103 cases since the beginning of the year (Surrey’s 2020 population was about 598,000)—by the way, that puts them at an infection rate of just over four per cent.

Whistler Mayor Jack Crompton called on the province last week to set up community vaccination clinics. It is interesting to consider that Revelstoke was announced as getting vaccinated along with a host of communities in the Island Health region, including tourist draw Tofino, before Whistler.

In Ontario, which is in full lockdown and putting school online, hotspot communities are also being vaccinated. Let’s remember that Ontario is about three times the population of B.C., so from a numbers-game point of view its situation is not that different from B.C.

It’s been hard not to think of Whistler as a hotspot community, and reading the coverage this weekend about the pandemic situation made it all the more concrete. It hits even harder when reading international news organizations such as The Guardian newspaper out of the U.K., which had this to say on April 11: “The Whistler Blackcomb ski resort was shut down by provincial authorities at the end of March after they realised that P1, the highly infectious coronavirus variant traced back to Brazil, was spreading rapidly throughout the community.

“As provinces across Canada break records for new cases of the virus, experts have grown increasingly troubled by the rapid and covert spread of variants. With 877 confirmed cases of P1, the province of British Columbia is now the centre of the world’s largest sequenced outbreak of the variant outside Brazil—and nearly a quarter of those cases have been linked to Whistler.”

Well, you know what they say, “There is no such thing as bad publicity.”

In this case, however, I might be inclined to argue the point, as it’s unlikely people will feel encouraged to book future trips here if we look like a vacation spot that can’t control the spread of an illness.

Signalling that we take the pandemic seriously and are doing what we can to keep visitors safe is a bedrock message for Whistler going forward.

(Let’s not forget that B.C.’s top doctor Bonnie Henry stated clearly that it was visitors from other parts of Canada that brought the COVID-19 variant P1 to Whistler this spring, and then other visitors which took it away with them and spread it at a time when only locals were supposed to be skiing here.)

There’s no escaping that it is only going to get busier and busier as spring turns to summer here. And let’s be clear, we want this, we need it. But we also need to be responsible.

We reached a milestone this past weekend in B.C.—we passed the 1 million mark of vaccinations (our total population is coming up on 5.1 million).

As of April 7, the most recent available numbers show that B.C. has received a total of 1,403,510 of all vaccines available. In Canada the vaccines cleared for use are the AstraZeneca (U.S.), Moderna, Pfizer BioNTech and the COVISHIELD (Verity, Serum Institute of India).

By the end of this week B.C. should receive another 294,660 does of Pfizer BioNTech and Moderna. No shipments of the AstraZeneca are expected this week.

As you get ready to roll up your sleeve, take a moment to thank those who went to bat for Whistler on the vaccine front, thank VCH, and make sure you thank those giving you your jab. Many are local people working a lot of overtime to make sure we get vaccinated for all our sakes.