EDITORIAL: Latest provincial rules like some sleight of hand 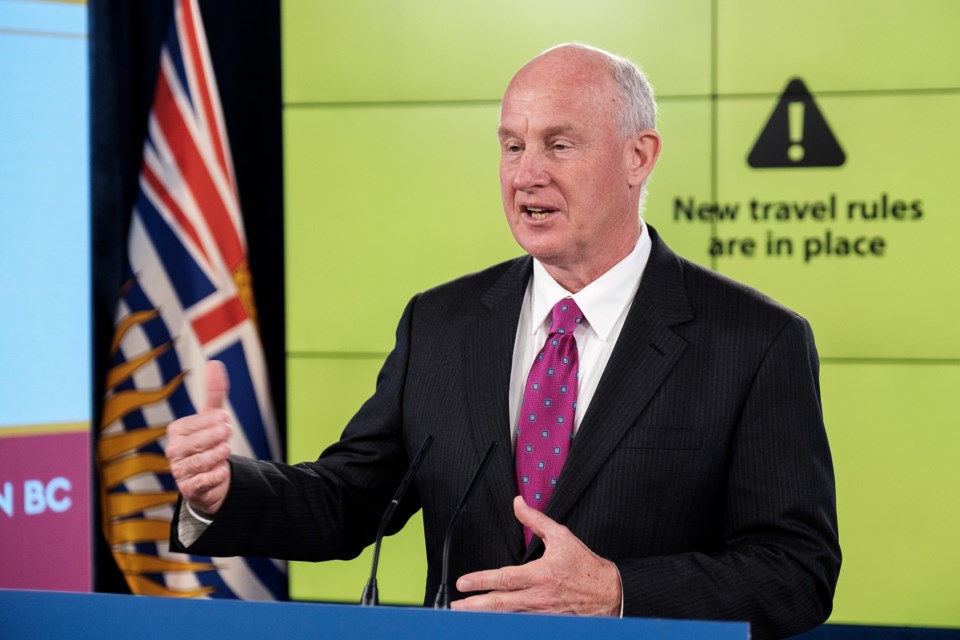 Minister of Public Safety and Solicitor General Mike Farnworth speaks at a press conference on April 23.BC GOV FLICKR

I’m not sure why we were all waiting last Friday, April 23 for the province to “fix” things when it comes to the spread of the coronavirus.

That morning, the media and a good deal of the province lined up to hear the Minister of Public Safety and Solicitor General Mike Farnworth basically repeat what Premier John Horgan, Health Minister Adrian Dix and Public Health Officer Dr. Bonnie Henry have been telling us for weeks: Don’t leave your community, whether that is Surrey or Whistler.

The whole misdirection by the government was like watching a magic trick—look over here while this minister says exactly the same thing, but differently. And like that famous saying, “Insanity is doing the same thing over and over again and expecting different results,” here we are with lots of people camping, day-tripping etc. inside their massive allowed-to-travel-in health authorities.

(And just as an aside, Einstein is not the author of the above quote.)

As Whistler slowly gets its case numbers under control and coming down (at 72 for last week) many here are willing to make the sacrifice and close their businesses short-term, shut down hotels and Airbnbs, hunker down for a few weeks in order to have a good summer.

The hope was that these mysterious “road checks” would fall occasionally before Whistler and stop casual travellers from reaching the resort until the order ends after the May long weekend.

But with a casual slight of hand Farnworth slipped into his speech that the, “periodic roadside checks like the counter attack program [will be] at strategic points into and out of the defined regions.”

So, in other words, at the borders of the health authorities. Our health authority, Vancouver Coastal Health (VCH), has been combined with the Fraser Health Authority for this exercise, so it’s obvious there won’t be any checks anywhere near the Sea to Sky region.

Farnworth’s message wasn’t anything new, and perhaps that is why it was so discouraging. It’s great for places like Vancouver Island, as this new rule means people can’t catch the ferries for recreation (assuming that travellers tell the truth about this to BC Ferries ticket sellers), after all we don’t want the virus to spread there any more than it already has from VCH and the Fraser region, which do account for the majority of cases in the province.

But there was little good news for us.

All the government leaders on this file have specifically mentioned Whistler in issuing their orders, suggestions and guidelines, asking people to stay away for now. So far it hasn’t worked. I mean, consider for a moment that our local RCMP has handed out close to $70,000 in COVID-19 related fines since last October!

It would be easy to get dragged down by this endless merry-go-round of government announcements and a feeling of doom, but it also struck me that the very fact that Whistler is mentioned so often should give us hope.

Look at it this way: Our resort and our welcoming community are so popular and such a draw to restore the souls of the COVID-weary that specific mention has to be made about our home all the time.

We also know that last summer was much busier than we expected considering we were in the full throes of the pandemic with no vaccine in sight—indeed, traffic levels were near normal in October 2020. Now, we are learning that with the province’s vaccination plan we should see about 51 per cent of B.C. residents vaccinated with one dose by the end of May. While that is not herd-immunity level it is a significant portion of the population and it could go a long way to helping our summer be one that gets Whistler on the road to recovery.

Surely what we can take away from some of this messaging is that no matter what, Whistler is a place people want to come whether it is to let loose (not helpful right now, that’s true), re-connect with nature, or spoil themselves—and that gives me hope.

That is the light at the end of my tunnel. It is what will help businesses keep their doors open, it will help keep our amazing restaurants, activity providers, accommodation sector operators and all the others that make Whistler tick survive this pandemic.

So, yes, right now we need to keep to ourselves, but travellers know we are safe, we are vaccinated, and we will be welcoming when it is time.

And the government also knows that—this is where people want to visit, this is where they want to spend their vacation funds and I would urge all those at the provincial and federal levels not to dismiss the power of those dollars when it comes to supporting Whistler.