"Live your life like you want to remember it..." Brett's favourite saying from grandfather Lawrence Tippie Imagine being a small-town jock with no connections and no money.
Jun 17, 2011 6:59 AM By: Michel Beaudry 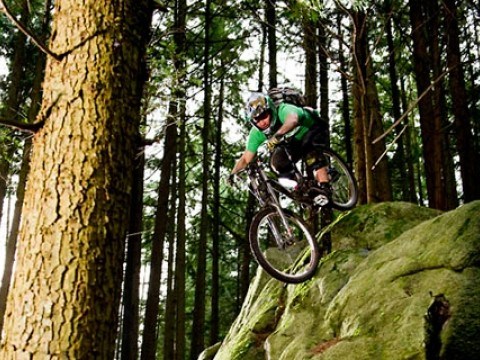 "Live your life like you want to remember it..."

Imagine being a small-town jock with no connections and no money. You've had to manage your own career, earn all your own cash, and generally come up with creative solutions to intractable problems. The hard-work gene is hard-wired in your soul though. You've been taught - over and over - that nothing comes to those who sit by and do nothing. Making sacrifices to achieve your dreams seems entirely natural to you...

You have fun at what you do. Sure. You're living the dream, baby, But you know it's all about getting better. You take chances. Push the envelope. Make yourself available for whatever comes your way. Anything - as long as you can keep doing what you're doing.

And then suddenly - wham! - success is staring you right in the face. People are sending you airline tickets to events halfway around the world. Big-name sponsors are lining up to pay you to wear their clothes or ride on their gear or appear in their movies. And everyone - and I mean e-ve-ry-one - wants to be your friend.

Think that might get your head spinning a wee bit? Brett Tippie says he didn't even see it coming. "It was almost like a dream," admits the 42-year old dad now. "I couldn't really appreciate what was going on. I was having too much fun..." But when the parade finally ended - when everything he believed in was lying in dust at his feet - the guy with the eternal laugh track in his belly realized that the time had come to change his ways. "It was either that," admits Tippie. "Or cut myself a headstone..."

Ah, but I'm getting ahead of myself again. Where did I leave off last week? Oh yeah...

From chance meetings with snowboarding icon Craig Kelly and future super-lensman Christian Begin in Rossland in the early 1990's, Brett Tippie soon found himself on the leading edge of the then-blossoming snowboarding movement. "The sport was doubling in size every year," he says. "All eyes were on us." He stops. Takes a breath. "After my first foray into pro racing, I decided: 'Wf hat the heck. I'm pretty good at this.' So I spent another summer tree planting - did you know I planted over a million trees in this province - and got myself ready for the U.S. Pro Tour."

His summer training style? "Well," he says with a bottom-of-the-tummy guffaw, "I couldn't afford to travel to New Zealand to train. But I'd found these gravel pits near Kamloops that had some good steep slopes. So I trained there instead..."

Gravel pit? Summer snowboard training? You gotta be kidding me...

"Absolutely not," he grins. "I even have it on film." Say what? "For sure," he says. "In the winter of '92, I was shooting with Adventurescope at Sun Peaks. Begin was the principal cameraman, but we got weathered-out - you know, a big Chinook came through and the hill got really warm - so we were looking for something to shoot. I just happened to mention the gravel pit idea to Begin and he went wild!" Seems like the young filmmaker immediately grasped the concept. "He said to me in that crazy French Canadian accent of his: 'Dis is juss lak Rocky 'itting sides of bif in de meat coolar. Less go!"

Life was beginning to look pretty good for the one-planker. "I'm competing on the World Cup circuit. I'm on the Burton Factory Team. Lots of action; lots of fans. I'm not the fastest on the circuit, you know, but I'm usually good enough for a top seed finish." Another bout of laughter. "In other words, I've got nothing to complain about..."

Meanwhile, the mountain bike phenomenon is beginning to gain traction with fun-junkies across the country. By the summer of 1994, action-filmmakers are seriously considering its potential for filler footage in ski and snowboard movies.

"I'm still living in Kamloops," recounts Tippie, "still rippin' the gravel, when I hear this rumour that my buddy Richey Schley is coming to town to shoot a 360-degree jump sequence on his bike for Greg Stump. So I call up my friend Craig Olssen - another top shredder - and we decide to poach the shoot." He erupts in laughter. "Christian Begin is in charge so I convince him to follow me to the east side of town where we proceed to shred the clay."

Begin can't believe his eyes. "After the first session," remembers Tippie, "Begin comes up to me and he's raving: 'Dat wass sick, dood. You'rr in da movie.'" He stops. Smiles. Shrugs near-helplessly. "Suddenly we're in Pulp Traction . And it goes from there..."

By 1997 and the release of the cult bike film Kranked, Schley, Tippie and company were bona fide MTB rock stars. "That film was a game changer, for sure," says Tippie. "The year before we'd gotten a lot of grief for riding off-trail. So I decided: 'Okay. That's fine. This year we're going to drop big cliffs instead."

It's worth watching Kranked again just to see how mad these guys really were back then. "Those years were amazing," he says. "More girls, more big parties, more hairball shooting - I was having more fun then I'd ever had."

But Tippie was also harbouring Olympic dreams. Included into the Games program for the first time in 1998, the once-rebellious snowboarding scene was undergoing a transformation of its own. And no matter how you played your hand, it all came down to one thing: if you were serious about racing, you needed a support crew. "I had a lot of friends training at Whistler in those days," says Tippie. "Greg Salmon, Darren Chalmers. Nelson Jensen, Phil Stiel. So I'd come down from Tod. Eventually I just decided to stay."

More important than his crew, however, was the mentoring he got from former national team downhiller Bob Allison. "I just can't say enough about the guy," he tells me. "Other than my high school football coach, he was the best coach I've ever encountered." He stops. Sighs. "Bob basically taught me World Cup technique..."

Alas, the cards didn't play out for Tippie when it counted. A top-four rider in Canada for most of his time on the national team, Brett failed to hold his position during the Olympic year and didn't make the team. Though he didn't know it then, it was the beginning of his long slide to hell...

"I thought life was still pretty grand at the time," he says. "Sure, I was disappointed not to make the Olympic Team, but there was so much else going on... I was Canadian bordercross champ in 2000 and doing pretty well, hosting my own TV show, The Sacred Ride , and commentating for World Cup snowboarding. The money was good. I was doin' fine."

But cracks were beginning to appear. "I went through a couple of painful break-ups. I became disillusioned with love, life and people." A long pause. He shakes his head, almost like he wants to get rid of the memories. "You know, I'm a bit of a risk-taker. And I'm a pretty excitable guy. So mixing that up with hard drugs was a bad move. All I could think about at the time was: 'Hey! This is great. I'm having a ball!'" He shrugs. "I became a competitive partier. Started hanging out with really bad people. Partying way beyond my health - almost to the edge of death!" A long sigh. "I knew I was in trouble, but I was so deep into it that I couldn't stop..."

Things finally came to a head when his grandma died. "I realized my dad was suffering. That my whole family - the very ones who'd supported me through thick and thin - was suffering." So Brett did the unimaginable - he checked himself into rehab. "It wasn't the thing that save me," he says. "But I learned stuff there that stuck."

He also learned who his real friends were - people like Greg Salmon who took him into his home in Squamish after rehab and found him a job working construction in Whistler with Victor Beresford Fine Homes. "I may be crazy," says Tippie, 'But I'm not a fool. Less than 10 per cent recover from what I've been through. I don't plan to be one of those who fail."

And he's got an even bigger reason this time. "I was seven months clean," he says, "when I fell for this mountain bike chick - a beautiful and funny girl." The two riders obviously clicked for Brett and Sarah Fenton now live on Vancouver's Northshore where they're raising their wonderful two-year old daughter together.

As for Brett's career, things haven't looked this good in a long time. "I'm back with Rocky Mountain, Raceface and Marzocchi," says a happy Tippie. "And I'm gonna be coaching at this summer's Camp of Champions - I'm totally stoked for that - and I'm doing this series of Webisodes for Pink Bike and I made the cover of Bike Magazine last month and..."

Suddenly he shuts up. His face breaks into one of the sunniest smiles I've ever seen. "You know," he says. "I'm so lucky to have the family and friends that I have. They're the ones who helped me get my life back in order. Without them, I'd still be lost."