From squat to Akasha – Life with the Munsters

The good times have been rolling along for so long at Whistler that newcomers to the valley sometimes take our economic bull run for granted. But those “oldtimers” who lived through the infamous 1981 recession know better.
Oct 10, 2008 7:08 AM By: Michel Beaudry 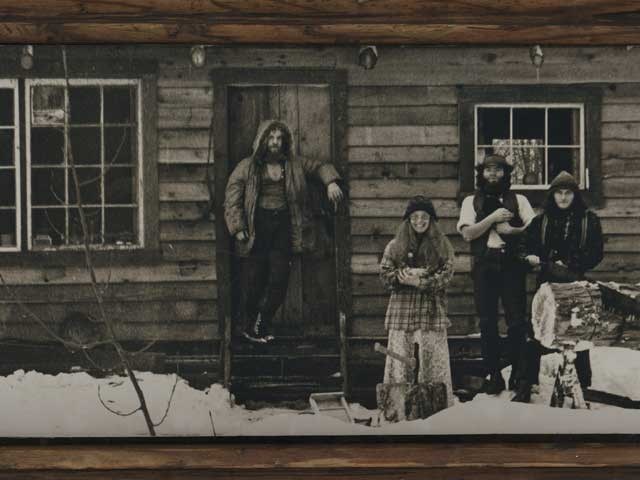 Past and Present Andy Munster stands in the doorway of his Fitzsimmons squat. Quite a difference standing with his wife Bonnie almost thirty years later in Akasha

The good times have been rolling along for so long at Whistler that newcomers to the valley sometimes take our economic bull run for granted. But those “oldtimers” who lived through the infamous 1981 recession know better.

“It was definitely a tough chapter in the Whistler story,” says Bonnie Munster. And then she laughs. “I think back on those days sometimes and just shake my head. Our parents thought we were crazy…”

Far from looking like an oldtimer, Bonnie has the youthful mien and the go-getter energy of a woman half her age. But make no mistake — she and her builder-husband Andy lived through some of the most tumultuous times in Whistler history. From hippie ski bum to school board trustee, from homeowner wannabe struggling with 21 per cent interest rates to designer/builders selling $8 million alpine castles — the Munster family has seen it all.

Indeed, their story is a reflection of the overall Whistler story — and in many ways, illustrates perfectly the unique blend of people and environment that came together in the early 1970s and changed this lonely mountain valley forever.

But back to 1981 and trying to survive one of the worst recessions in B.C. history. “We were renting a 10-acre farm in Pemberton in those days,” explains Andy. “We had a substantial garden and raised chickens, cows and pigs and lived pretty much off the land. In fact, we barely had any cash to speak of. And most of what we had went to paying the interest on our mortgage for the lot we’d just bought in Whistler…”

Another burst of laughter from Bonnie. “Other than that, we pretty much put off paying the rest of our bills. Every time the B.C. Hydro guy would come around knocking, I’d meet him at the door with my newborn twins at my breast, put on my most sorrowful expression and beg him not to cut our power off.”

Anybody who is familiar with Bonnie understands what a force of nature the B.C. Hydro guy was dealing with. Not surprising then that the electricity was never cut off at the Munster farm…

Not surprising, either, that this is the same woman who was recently heard correcting an overly-enthusiastic Fortress executive who’d announced he’d just bought the town. “You didn’t buy Whistler,” she told him. “You bought Intrawest — there is a difference.” She smiles. “He looked genuinely confused,” she recalls.

It’s a beautiful late September day. We‘re sitting on the Munsters’ deck at their home on Balsam Way, on the very same Tapley’s Farm lot they bought in 1980 when a posse of long-haired Whistlerites decided to take ownership of their housing woes (yes, there were housing issues even back then) and do something about it. The result was the creation of the legendary Mountain Development Corporation (MDC) — and the first iteration of affordable resident housing at Whistler.

“The way the lots were divided up was pretty simple,” explains Andy. “We had a party (as we often did in those days) and everybody who had paid up put their names into one hat, and the lot numbers went into the other….”

Bonnie jumps in: “Once your name and lot assignment was called, you had the rest of the evening to decide whether you wanted to keep that lot or try and persuade somebody else to switch with you.” More laughter. “It was quite a party.”

As it turns out, the Munsters were perfectly happy with the outcome. And though their house has seen numerous add-ons over the years, they maintain they’re just as pleased with their lot today as they were 28 years ago when they first walked across the swampy ground next to the BC Rail line to check out their new acquisition.

“You know, the MDC initiative was quite a revolutionary move for this community,” Bonnie tells me. “Think about it — here were all these young people willing to address their housing problems without turning to government for help. Realtors, lawyers, ski bums, artists — everybody got involved. Meanwhile, the municipality got a heck of a lot from us in return. In fact, it could be argued that our little project became a model for many of Whistler’s subsequent developments. We gave seven usable acres of our land to the municipality for employee housing, turned over the wetlands as a dedicated preserve, taught them that every neighbourhood should have a park and even got the roots of the Valley Trail going….”

But we’re getting ahead of ourselves again. For to really understand the Munsters’ story, you have to reach back even further in time.

Like most young skiers growing up in Quebec in the early 1970s, Andy Munster dreamed of only one thing: moving west and skiing big mountains. “In those days, it was all about Aspen,” he tells me. “So that’s where I planned on going. But two weeks prior to my departure, a friend of mine suggested I should check out Whistler.” Andy never made it to Aspen…

“I drove straight from Sherbrooke to Alta Lake,” he says. “Didn’t stop in the Rockies, didn’t even stop in Vancouver.” It was September of 1971, Andy was 21 years old and the future looked bright indeed. Now if it could only stop raining…

“For the first three weeks I was in Whistler, I didn’t see a thing,” he remembers. “And then the clouds cleared and the mountains suddenly came into view.” There was already snow in the alpine, he tells me, and fingers of white groped their way down the slope. “It was beautiful,” adds Andy. “It was amazing — I was in awe…”

Meanwhile, Bonnie was still finishing school in Vancouver. “I started coming up here in the early ’60’s with my uncle who was an avid fisherman,” she says and laughs. “My mum and my aunt were totally freaked out by the road. No joke, they’d make us kids walk across the old logging bridges because they didn’t think they were safe for cars…”

After finishing high school, Bonnie embarked on a backpacking trip to Europe. “I was in Grindelwald when it hit me,” she says. “Suddenly I realized that I wanted to live in the mountains. Wanted to live in Whistler.” So when she finished college that’s what she did.

She met Andy somewhere in the mid-70s — neither one can agree on the exact date — but they do remember what set it off. “I picked Bonnie up hitchhiking,” says Andy.

“Yeah,” she says. “That’s when you first noticed me… we’d partied together for a whole season!”

They eventually hooked up at a full-moon windsurfing party on Alta Lake. Soon they were a steady couple. “Her personality, her laughter, her energy — she was just a lot of fun to be around,” explains Andy. And then he smiles. “She’s still a lot of fun. We’ve raised a family together, built a business together, and even today, we still try to ski our age together every winter. I guess you could say it’s worked...”

Speaking of work, the guy who cut his builder’s teeth erecting a squatter’s shack on the banks of Fitzsimmons Creek is now one of the most respected high-end builder-cum-designers around. And much of that recognition came about because of one project.

Mention Akasha to anyone familiar with the building game and the reaction is invariably the same. Great vision, beautifully-designed, organic-feeling, quality all the way: you name the superlative, it’s been used to describe this groundbreaking Whistler home. When it sold in the year 2000 — for what was then a shocking $7.9 million — the 5,000+ square-foot home was the most expensive house in Canada. And the Munsters admit they still take grief from their friends over it.

But Bonnie makes no apology for its sumptuousness. “All we wanted to do was build well,” she argues. “At the time, there was nothing of that quality being built in Whistler. And we’ve always believed, Andy and I, that a community should be comprised of all segments of society, young and old — rich people included.”

Still, they both concede that their vision has changed considerably since 2000. “More than ever, we’re committed to building high-quality homes,” she says. “Only now we’re looking to design smaller places, providing alternative means of power — wind and solar for example. We’ve become even more sensitive about what we put in the ground now…”

Which brings us round to Whistler. “This is our community,” says Bonnie, who fought some epic battles on its behalf during her 13-year stint on municipal committees and on school board. “We’re committed to this place. Still…” She pauses. “The politics, the attitude — Whistler is not the same anymore. Something’s been lost.”

Andy is more blunt. “We’re paving over paradise,” he says. And then he sighs. “The ‘Whistler Experience’ is becoming way too industrial. And I believe our community is falling apart because of it. We’re losing our seniors, can’t find homes here for our grown-up kids…” Another pause. “You know, I truly love this place. But I really fear for its future…”