Grabbing the reins; Korthals goes for it all

" Come Fairies, take me out of this dull world, for I would ride with you upon the wind and dance upon the mountains like a flame!" - William Butler Yeats She wasn't always a mountain girl.
Sep 28, 2011 9:00 PM By: Michel Beaudry 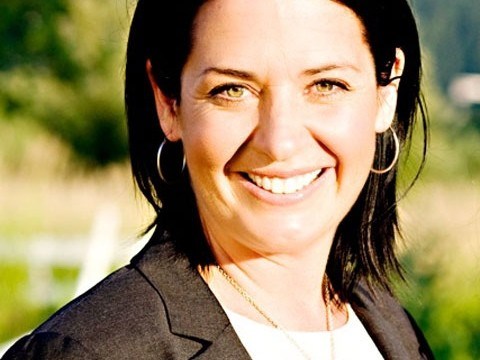 " Come Fairies, take me out of this dull world, for I would ride with you upon the wind and dance upon the mountains like a flame!"

She wasn't always a mountain girl. In fact, her first love was canoe tripping and she spent countless summers in the Northern Ontario backcountry travelling from lake to river and back again. Even after she moved here in 1989, Lisa Korthals continued to feed her paddling addiction.

Whistler had turned out to be everything she'd dreamed of. This place, Lisa had already decided, was where she wanted to lay down roots. But after a full winter of ski teaching, the call of the rivers was just too strong. "I returned home in the summer of '90," she explains, "and led a canoe trip down the Moisie River deemed the "Nahanni of the East" in Northern Quebec - a beautiful run in the boreal forest."

Unless you've done a lot of paddling, it's hard to imagine just how magical it is to spend weeks and weeks in the bush travelling through our country's isolated waterways. Think complete isolation: no phones, no highways, no grocery stores or malls. Think total immersion: the sound of a laughing loon late at night; a majestic moose crashing through the shallows by your tent. Sunsets to die for. Sunrises that inspire all day long. And the further north you get, the more magical the setting becomes.

Lisa's 43-day self-supported trip down the Northwest Territories' legendary Coppermine River in 1991 is about all those sensations. And more! "When I think about it now," she says, "I can't believe they let us do it. We were just 21 years old, best friends and two trip leaders in charge of 10 16-year-old kids. We pulled a trailer with six canoes halfway across the country, did the trip, and then drove all the way back to Ontario."

What a summer. What a paddle. "It was a tough haul to the headwaters of the river," she recounts. "Over 120 portages..." And with full canoes! "We only saw one other person the entire 43 days. The barrens are a magical place. It's as though the river was etched into the landscape by the finger of the creator. At times the etching is not so deep and at other times deep enough to force us to scout whitewater from 150-feet above the river."

Korthals admits that this particular trip had a big impact on her life. "All those kids that were on that trip with me? We're all still connected to this day. The relationships you form when you are surviving together in the wilderness go to a depth that is so real so raw it has a profound impact on your life. My guiding experiences have had a big impact on shaping who I am now."

More importantly she now knew what she wanted to do with her life. "I ended up going back to school - Cariboo College in Kamloops (now Thompson Rivers U) - and attended the Adventure Tourism program from '93 to '95." Was it better than her UBC experience a few years before? "Totally," she says. And laughs. "It was exactly what I wanted."

Meanwhile, she'd also been moving up the ski-teaching certification ladder. She passed her CSIA Level IV exams - considered the Holy Grail of Canadian ski pros - in the winter of '94. And suddenly a whole new world opened up. "I was so focused on getting my Level IV that I hadn't allowed myself to explore the Whistler backcountry much," she admits. But with the prestigious new title in her pocket now, she could indulge her off-piste skiing urges to her heart's content. And she did.

She continued to take summer jobs outside Whistler - a stint at the Pacific Crest Outward Bound School in Oregon and another on the Nahanni River as a rafting/canoe guide - but it was getting harder and harder to leave. By 1995, she was a full time Whistler resident. "I worked at the Chateau golf course for two summers," she remembers. "And then I landed a horticulture job with the municipality - and that was awesome. I worked with great people and was outside all the time." A quick smile plays across her lips. "It felt like you were in the very heart of Whistler. You always knew what was going on."

Lisa also continued to teach skiing. But given the great changes in the resort - and the huge growth of personnel at the ski school - that job didn't hold as much appeal for her. So when Mike Wiegele invited her to work at his heli-skiing lodge in Blue River, she jumped at the opportunity.

It was around this time that she met the man who would eventually become her husband - Johnny "Foon" Chilton. A big-mountain adventurer who'd cut his teeth exploring the Coast Range with the likes of Eric Pehota and Trevor Petersen, Chilton is a quiet-spoken man who would much rather let his actions do the talking. But there's no mistaking his passion for the mountains. Skiing for Chilton is a near-religious experience. Not in a sanctimonious look-at-me way of course. But in a deep and profound sense.

Which immediately resonated with Korthals. "We met freeskiing," she says. "We had an instant connection. A common passion, not only for the mountains, but for the natural world." She pauses for a breath. With Johnny, I knew I had found my soulmate."

Unless you're going solo, big-mountain adventuring is all about trust. When the crap hits the fan - and you can be sure it will at some point - you want to be confident that your ski partner can handle whatever's coming down the pipes. Indeed, your ultimate survival may depend on your partner's ability to remain cool and act smart in such circumstances. Maybe that's why there are so few husband-and-wife teams in this very dangerous activity.

No matter. Korthals and Chilton make a great mountain duo. Consider their assault on Alaska's daunting University Peak in the spring of 1999. Boasting a 4,600-metre summit - with close to 2,700 vertical metres featuring a solid 50-degree pitch from top to bottom - the mountain had never been skied successfully before. So the Whistler couple decided to go for it - and dragged then-rookie photographer Blake Jorgenson along to record their feat. Lisa's late brother Chris also joined the group to provide mountain safety.

"Unfortunately," recounts Lisa, "an American team got there just ahead of us and claimed the first descent." But it didn't matter that the peak had already been skied, she adds. This face was the ultimate ski mountaineering objective. It was big, steep, beautiful and remote. One of the largest skiable faces on the planet.

"We started climbing at 6:00 at night," she remembers. "And went at it for 13 hours straight at -30C. Our sweat was freezing on us! We were less than 800 feet (243 metres) from the top when we decided to turn around. It was a safety call. The wall was south facing. We needed to ski it before the sun hit the face as the temperature rose during the day..."

At their turnaround point, the couple dug out a flat platform in the snow to hold their skis as they clipped in. Senses heightened. The quiet, the fear, muscles firing. Ready. "Just then," she recounts, "a massive slide roared down the right wall of the face: the line the Americans had climbed and skied. Had we skied there we'd be dead now."

The run down took almost two hours. Two hours? "Yeah," she tells me. "It was the longest descent I've ever done. It was also the most committing first turn I've ever made! So intense. I remember taking a very long time before committing my skis to the falline on that first turn. A crash here was out of the question."

As for Jorgensen's photos of the descent, most were unusable. "The mountain was just too big," she explains. "We were like flies on a wall..."

Korthals continued to heli-guide. But there were big changes on the horizon. First came her son, Tye, born in 2005. "I went back to Wiegele's the next winter. Johnny and Tye came too. Still, it was hard. I wasn't ready to become a 100 per cent mom yet, but..."

Then came her third knee operation in 2010 - a big one. "I was on crutches for eight weeks - no weight-bearing at all!" And the enforced passivity really pushed her to reflect on her life. "I guess I had an epiphany after that surgery. I decided I wanted to live in Pemberton full-time, have fun, find a job that kept me here."

That's when a longtime friend, Erin McCardle Stiel, came up with an intriguing proposal. "I'm looking for a partner," said the veteran Re/Max realtor. "Would you ever think of doing real estate?"

"I applied for the course the next day," laughs Korthals. "Real estate is a great transition for me. I have always loved working with people. Now I can share my passion for Pemberton with people and help them facilitate their own lifestyle change. I love working in a team. It offers support and flexibility and enables both of us to maximize the lifestyle this amazing community has to offer."

Lisa continues to do some guiding for Pemberton-based Coast Range Heli-skiing which means she gets to ski in her backyard all winter while her realty office is only a five-minute drive away from the family home. "I definitely have the best of both worlds now," she says. "I love my life. I love it here. I can't get enough of it..."