Graham Turner – Growing up with Showcase

There must be something in the waters of Deep Cove… “It certainly was a great place to grow up,” says 41-year-old Graham Turner.
Oct 3, 2008 6:52 AM By: Michel Beaudry 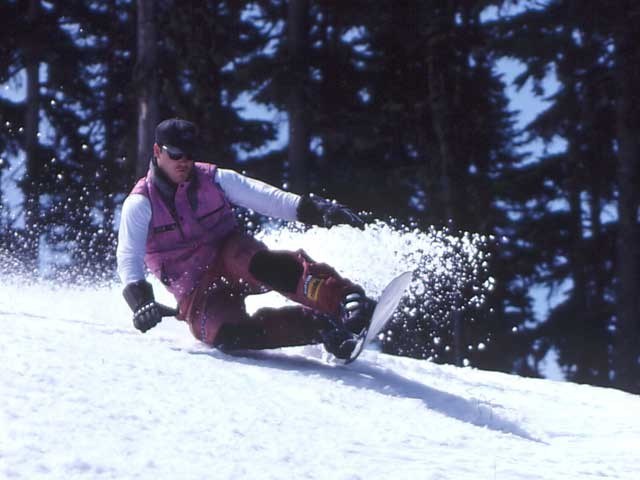 There must be something in the waters of Deep Cove…

“It certainly was a great place to grow up,” says 41-year-old Graham Turner. Iconoclast, visionary, retail genius, motorcycle nut, gear innovator, outlaw: call him what you will, the man behind the Showcase brand — one of the most successful snowboard franchises on the continent — is yet another one of those legendary Deep Cove dudes.

“You know with that mix of ocean and mountains, the Cove was an incredible spot for kids,” he explains. And chuckles. “I remember hitchhiking up to Mt Seymour as a 14 year old every day of the winter after school. My older brother had gotten me a job at the rental shop there.” He laughs. “I come from a family of ‘wrenchers’,” he says. “For me, it was the ideal way to earn money…”

And he’s never had a reason to change his mind. For 25 years now, Turner has been somewhere near the leading edge of mountain-sports retailing and merchandising. “It’s been an unbelievable ride,” he tells me. “I couldn’t have timed it better if I tried. I mean, I lived through the birth and development of two major sports — snowboarding and mountain biking. Went to school with guys like Lumpy Leidel. I’ve got absolutely nothing to complain about.”

In fact, he’s got a lot to celebrate. For this week marks the beginning of a new adventure for Showcase Snowboards as the retail mavens at W/B have decided to take their mountain-based store philosophy to the city. And Turner, who has been with the store since the very beginning, couldn’t be happier….

“This is huge for us,” he tells me in that slow-mouth, pseudo-tough North Van drawl of his. “We had a licensing agreement with Westbeach that dates back to 1999. And I think it was a great partnership. But now we feel that the Showcase brand is strong enough to stand on its own.”

So no more Westbeach shops? “That’s right,” he says with a canary-eating grin. “All three are Showcase stores now… even the one in Vancouver.”

But we’re getting ahead of ourselves again.

Turner isn’t one to talk about himself a lot. In a crowd, he’ll just stand back and let the other guys crow. But get him on his own and ask him the right questions — that’s when the stories really start to flow. “The early ’80’s was a really great time to be a kid on the North Shore,” he tells me. And chuckles some more. “There we were, building three-ply mahogany snowboards at school in the water-ski press that our woodwork teacher, Mr Payne, had designed…”

Of course, that would be back in the day when snowboarders were considered a nuisance by mainstream resorts. “At Seymour, they used to chase us with the snowcat,” says Turner. “And when they caught us, they’d confiscate our boards. And it didn’t even matter if we were on the hill or not.” Another burst of raucous laughter. “If they caught us hitchhiking down the mountain with a board under our arm, they’d take that too.”

He still remembers the day when somebody in his posse actually bought a snowboard. “You couldn’t buy a new snowboard in North Vancouver,” he explains. “So one of the boys went down to the Bellis Fair Mall and picked up a brand new Burton Performer. We now copy the shape for our own boards…”

But it’s not like snowsports was all Turner focused on in his youth. “My two older brothers were quite successful on the provincial motorcycle road racing circuit and I spent a lot of time at the Westwood track in Coquitlam.” He sighs. “You know, that’s a pretty safe place to go balls-to-the-wall on a bike. So I got a lot of practice on that track.” A pause. “I saw my fair share of crashes too…”

Whether on a snowboard or a motorcycle — or even on the one-speed Schwinns that the North Shore boys first started riding on the local horse trails — Turner was surfing the new wave of action sports like a man possessed. “We didn’t know any different,” he says. “It was just the way things were in those days.”

Although Turner had skied Whistler as a kid, it wasn’t until the summer of 1988 that things really twigged for him here. “I was at this party and a buddy of mine told me he was heading up to Whistler for this big mountain bike race,” he recounts. “So I folded myself into the back of his VW thing and went along for the ride.” He pauses. Smiles at the memory. “So we get to the bottom of the course, and the first person I see is Ace McKay-Smith doing the bike checks.” He sighs longingly. “I fell in love immediately…”

But seriously — “Well, you know, I got to meet Bill Lamond that weekend, and I think Scott Carrell too. And I got to go to all these great parties.” Suddenly Whistler looked pretty intriguing to the 21 year old. “So I went home, packed up my things and headed back up on the train. Found a place to live and got a job working at the repair shop at the base of Blackcomb Mountain. I think it was Charles Grooms who hired me.”

Yet another stint of laughter. “Funny thing too — those guys are my competitors now…”

Hard to believe, but Turner moved to the valley at a time when snowboarding was still illegal on Whistler Mountain. “Blackcomb was so much more progressive in those days,” he says. “We had an amazing hard-boot posse back then — Ross Rebagliati, Greg Salmon, Darren Chalmers, guys like that — and we soon became fixtures on the Kokanee Race Series.” He snorts. “The organizers really didn’t know what to do with us — they used to stick us in the telemark category.”

It was certainly an exciting time to be at Whistler. “They built the first staff housing in ’89, and I was the first employee to move in,” Turner tells me. He adds that he was also the first employee to get kicked out. “It was the weekend that Boyd won the downhill here,” he explains. “I guess we kind of got carried away. They say I assaulted a security guard with a beverage…”

If a W/B employee were caught doing something like that today, Turner acknowledges, he’d be immediately fired. “But those were different times,” he says, trying to suppress a grin. Indeed, for instead of getting fired, he was put in charge of the new snowboard shop his superiors were planning.

“It was becoming pretty clear by 1989 that Blackcomb needed a dedicated snowboard shop,” he explains. “So everybody started looking around for a likely location. We had this shop in the Chateau called Showcase Tennis. So my boss tells me: ‘Here you go Graham. We’ll just change the name to Showcase Snowboards for the winter and you’re in charge.’ And that’s pretty much how it all began…”

Over the next 10 years, Graham would ride herd over his Showcase team and grow the business until his shop became the biggest Burton dealer in North America. By the late 1990s, Showcase was, arguably, the hottest retail property at Whistler. And not just because of its sales volume….

“By the time Showcase moved from the Carleton Lodge to its new Westbrook site — that was probably ’97-’98 — we were really pushing the envelope,” explains Turner. “Go-Go dancers, whipped cream wrestling matches, crazy parties, celebrity riders — even a wall of Kraft Dinners at three-for-99-cents — there was nothing we didn’t try. We just wanted to blow our customers away.” He smiles. “I mean, think about it — a kid goes back home and tells his friends about getting his arm danced on by a nearly-naked girl while buying some gear. You can be sure his buddies will be paying attention to the store’s name…”

Fast forward to today. “It’s not easy staying on the edge like that,” admits Turner. “And that’s probably our biggest challenge right now.” He stops speaking for a moment. Looks for just the right words to apply. “The people making the decisions right now at W/B are a lot older than they were just a few years ago. But we have to stay plugged in to youth culture — particularly in our business. We have to empower the guys who are still living on that edge and give them a reason to stay involved.” And that, he says, is a lot harder than it looks…

“We have to make sure we tell the right story to the young guys and gals coming in to the company,” he explains. And then he goes on: “As in, you might never become a manager here, but you’re going to learn a heck of a lot if you stick around. So let’s work on your resume and get you as qualified as we can, and then maybe you can eventually move on from here and get your dream job somewhere else.”

He sighs. “You know, a lot of talented young kids have bumped their heads against the management ceiling at W/B in recent years. And we lose a lot of good staff because of that. These people are the heart and soul of our operation. So I always tell ’em: ‘Follow your dreams and use the mountains to grow and learn…’” He smiles one last time. “After all, that’s what I did…”