Greg McDonnell - speaking out for those who can't

"If we are to live not just for the moment but in true consciousness of our existence, then our greatest need and most difficult achievement is to find meaning in our lives.
Nov 19, 2010 7:22 AM By: Michel Beaudry 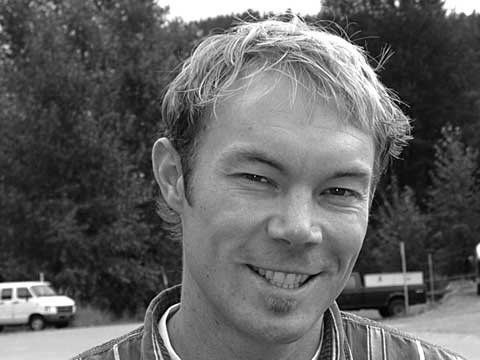 "If we are to live not just for the moment but in true consciousness of our existence, then our greatest need and most difficult achievement is to find meaning in our lives."

It's not like he has a booming voice or anything. And he's not combative one little bit. Soft of tone, easy-going and courteous to the extreme, the 39-year old executive director of the Whistler Community Services Society (WCSS) seems a most unlikely candidate for social-warrior status. The guy looks more like a young accountant than a community crusader.

Since his arrival at Whistler in 1997, the man has been tireless in his quest to provide help to those individuals - mostly young and mostly migrant - who fall through the cracks in our system. With a laser-like vision and a near-magical way of making "impossible" things happen, McDonnell has managed to patch together a strong social net for Whistler's growing underclass. Yet, if it were up to him, there'd be even more done for our "invisible" citizens.

"The problem," says Greg, "is that we get these (mostly) well-educated kids who come here with limited life skills; they find a low-paying job, live in high density housing and suddenly fall in love with Whistler. The question then becomes: how do I survive here full-time?" He sighs. "And that's not as easy as it looks..."

Still, what Greg's managed to accomplish in the last 13 years is truly impressive. Ever heard of the Youth Outreach program? S.N.O.W? Or Whistler Welcome Week? How about the Jill Ackhurst Community Welcome Dinner? The latter happened last night at the Conference Centre, with over 800 people in attendance (including 200 locals)!

"It's been one of our most successful initiatives to date," says McDonnell. But it's not all that surprising. "In a tribal sense, what better way to initiate newcomers to a place than by sharing a meal with them?"

It's all about inclusion. "I always thought there was a needless sense of separation between these youthful newcomers and members of the community. My vision? Let's make them feel a part of Whistler as quickly as we can. Let's give them a sense of the success and spirit of this place as soon as they get here."

The genius of Welcome Week has been to partner these incoming youngsters with long time locals so they can get an immediate feel for "Whistler style." The result? Both sides have come away feeling more connected to the community. More in touch with what's really going on around here.

"Nobody in Whistler likes to talk about it much," he says, "And many aren't aware that it's even happening. But we now have a complete demographic of people (including homeless, transients, addicts) living in this valley. In that way, it's like any other B.C. town. It's not just this outlying clientele coming here to wine and dine anymore. Our speedy growth has catapulted us into our current reality."

And that reality, maintains McDonnell, will require more attention than what we've given it in the past. "A lot of the energy at Whistler has been focused on economic and environmental issues," he says. "And I think we've done a pretty good job there. But what about the third pillar of a successful community? What about our social issues?"

This is where McDonnell's WCSS work has provided him with a unique vantage point. "Unfortunately," he argues, "that social perspective has been under-represented in Whistler's planning for the future. " He shrugs. "Which is why I volunteered to be on the Community Advisory Board for the OCP in the first place. Working on the new community plan is my opportunity to bring the social agenda forward."

Still, it's a very long way from the hoop dreams Greg harboured as a kid. "Basketball was definitely my thing," he says with a self-conscious grin. "My early dreams were all about playing in the NBA." And then he laughs. Didn't matter that he'd grown up on the shores of Deep Cove and spent much of his after-school winter hours skiing on nearby Grouse Mountain. Playing ball, thought McDonnell, would be his salvation.

"I did poorly in school," he tells me. "If it wasn't for sports and the social connection it provided, I would have been lost..."

His smile evolves into a chuckle. "Whistler was always on the horizon, though. My dad had worked at the Boot Pub in the late '60's and my childhood was filled with fanciful tales of his years here. You know, like the time someone rode his horse right into the pub..." A long pause. "It was a real fantasy of mine to move up here and ski full-time."

Meanwhile, there was this little detail called school. When a b-ball scholarship to the University of Lethbridge didn't work out as planned, Greg found himself living in southern Alberta, as he says, "spending all my time and money skiing."

Obviously his dreams of basketball greatness were not as strong as he'd thought. "So I moved back to Vancouver and went back to school." He takes a breath. Smiles again. "Still, I had a Cypress pass and skied as much as I could. I have to admit - it was extremely hard for me to stay in school and finish my undergraduate degree."

But it's a good thing he did. For it was while he was completing his undergraduate studies at SFU that things started to gel for the young jock.

This is how McDonnell explains it on his website. "I had an experience early in the 1990's," he writes, "where I volunteered at a summer camp for youth and teens with cancer. This profoundly changed my perspective and outlook on life as I learned with glee what it meant to truly live life. I knew from this point on that I would work with people."

It also provided him with a new philosophical beacon. "Looking back," he concludes, "I realize that the lessons taught to me from the youth at this camp are still close to me: live in the present, laugh often, and practice loving kindness."

And he definitely practices what he preaches. A conversation with Greg is punctuated with much laughter and loads of good will. But that doesn't mean he's not serious about what he does. Au contraire...

From the moment he arrived in Whistler, Greg pretty much knew what he wanted to do. "Even before I'd moved up here full time," he recounts, "I was pitching the RMOW on a youth-at-risk program." Good idea, they said. But not now.

"It was around that time that I met Belinda Keech," he continues. "She was working with the MCHA (the Mountain Community Health Alternatives) and had just received a small grant for a high school drug and alcohol awareness program. So she took me on for that."=

Unfortunately, the MCHA wasn't really set up to support the kind of programs Greg envisioned. Undeterred, McDonnell broadened his employment search. Which eventually brought him face-to-face with Janet McDonald, then executive director at the Whistler Community Service Society. Shortly after, Greg found himself with a new job. "It was truly exciting," he admits. "Suddenly there was this whole new component at WCSS - programs designed specifically for young adults. For the first time in my life I was advocating for things I really believed in."

But not just advocating. In 1998, for instance (less than a year after his arrival), the WCSS opened its pioneering Re-Use It Centre. "That was big for us," he says. "Really big. It's such a great example of social entrepreneurship. It really inspired us to grow our programs."

Indeed. Soon to open at an outlet near you is the WCSS's newest game-changer, the Re-Build It Centre. And there's going to be more, warns Greg. "One of our forthcoming plans is to build a year-round emergency shelter in Whistler. I know there are people in the valley who don't think it's necessary. And I've certainly felt the brunt of their views." He pauses. "But then they don't get to see what my staff sees..."

Like so many of his same-aged peers in Whistler, Greg recently became a father, which has brought him a whole new perspective on the community. "Unlike so many other places," he explains, "new parents in Whistler are faced with the reality that grandma and grandpa aren't around to help. The result? People turn to their friends for support. I've been really blown away by all the help we've received."

With a busy (and successful) counselling practice in Function Junction - in addition to his executive work at the WCSS - one could be forgiven for thinking that this new father has his hands full right now. So why volunteer his time as an advisor for the OCP committee? "The spirit of this place has really nurtured me," he says. "And that's why I got involved. With this community plan update we have an opportunity, in a tribal sense, to participate in defining our future." He pauses. Takes a big breath. "That's why I think everyone who has a stake in this place should be attending the OCP workshop next Wednesday night. Simply put - it's all about us and our families and our lives."