This week, I had the unenviable task of filling in as Editor in Chief for Pique's fearless newsroom leader and resident cat lady, Clare Ogilvie. Being the first time I've had to take on this role, I was a little nervous.
Sep 5, 2019 12:00 AM By: Brandon Barrett 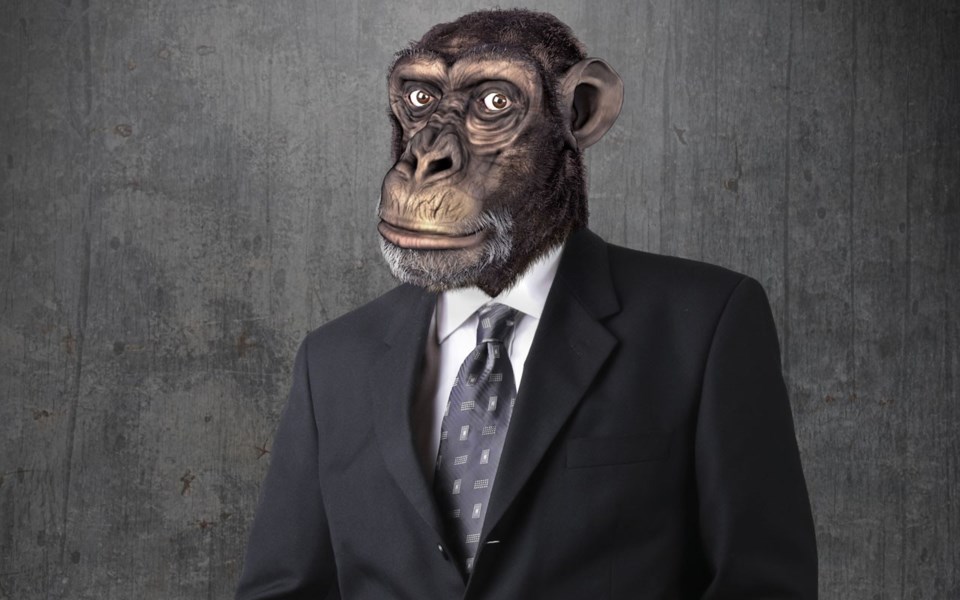 MONKEYING AROUND The Resort Municipality of Whistler recently released its proposed Animal Responsibility Bylaw, which includes a list of prohibited animals. At the top of the list? 'All nonhuman primates.'. <a href="http://www.shutterstock.com">www.shutterstock.com</a>

This week, I had the unenviable task of filling in as Editor in Chief for Pique's fearless newsroom leader and resident cat lady, Clare Ogilvie.

Being the first time I've had to take on this role, I was a little nervous. The good news, folks, is, if you're reading this right now, it means we put out a paper this week. The office didn't burn down. Everything is as it should be.

Of course, one of Clare's many (many!) weekly responsibilities is coming up with an editorial. Typically an editorial will take a strong and reasoned stance on a particular hot-button issue of deep resonance to the community.

This will not be one of those editorials.

That doesn't mean I don't feel passionately about my chosen subject. In fact, I've never felt so strongly about anything in my life. Well, at least the last 20 minutes of my life. I'm talkin' 'bout monkeys, y'all. Why, exactly? Well, because the Debbie Downers over at municipal hall won't let me have one. And I don't like being told I can't have a monkey.

As part of its new Animal Responsibility Bylaw (which, lest you think I didn't read the thing, is otherwise a valuable and long overdue piece of legislation—read more about it here), the wet blankets at the Resort Municipality of Whistler (RMOW) have released an extensive list of animals prohibited within Whistler's boundaries.

These include, but are not limited to: bears, elephants, seals, anteaters, sloths, armadillos, platypus (platypi?), moose, the creepiest types of spiders, mongooses, whales, hyenas, dolphins, flying lemurs (are normal lemurs OK?), something called a hyrax, and, right there at the top of the list, "all nonhuman primates."

So the deadbeat housemate down the hall who never washes the Kraft Dinner out of the stovepot is fine, but I can't have a monkey butler? This injustice will not stand.

Maybe the way to attack this is in the wording of the bylaw. Bureaucrats love technicalities. What if, hypothetically speaking, I dress up my monkey to look as human-like as possible? You're telling me if I throw a chimp in some board shorts, a Volcom hoodie, and a snapback that the public at large won't just think he's a van-dwelling ski bum who hasn't visited the barber in six months?

Besides, we all know full well Whistler remains in the throes of a severe staffing shortage. Our primate brethren could easily fill that void. Hire some hard-working orangutans for the winter, and suddenly your restaurant/hotel/zipline operation—seriously, how good at ziplining would orangutans be?—and then, next thing you know, bam, you're the hottest tourist attraction in town. Making money hand over fist.

Now, I know what you're thinking: What if the monkeys revolt? Generally speaking, monkeys can be an unpredictable bunch. One second you're playing paddy cakes, the next your face is being surgically reattached to your skull.

That's where the good folks at the Whistler Chamber of Commerce come in. They have, over the years, honed and refined the Whistler Experience customer-service program to such a degree that I'm almost certain even a monkey could be trained into delivering an exquisite, world-class experience to humans of all types.

The Barenaked Ladies, true Canadian patriots that they are, once asked an important question that I now pose to you, the fine folks of Whistler: Haven't you always wanted a monkey? Personally, I didn't know I wanted a monkey until the RMOW told me I couldn't have one. The great tragedy is, now I—and more importantly, you, fellow monkey-wanter—will never know the joys of nonhuman primate ownership. There's an election issue if I ever heard one.

Not bad for my first editorial, eh? I think I'm getting the hang of this whole editor thing. I wonder if they'll ask me back.

THE OUTSIDER: Dog days for Doglotion.com
Jun 28, 2020 8:45 AM
Comments
We welcome your feedback and encourage you to share your thoughts. We ask that you be respectful of others and their points of view, refrain from personal attacks and stay on topic. To learn about our commenting policies and how we moderate, please read our Community Guidelines.