In the Line of Fire

By noon of day three on our eight-day rafting trip across the Chilcotin Plateau last September, we've already left behind the Taseko and Chilko Rivers for the Chilcotin River—considerably less tantrum-prone but still a roller-coaster splashing
Sep 1, 2019 2:00 AM By: Leslie Anthony 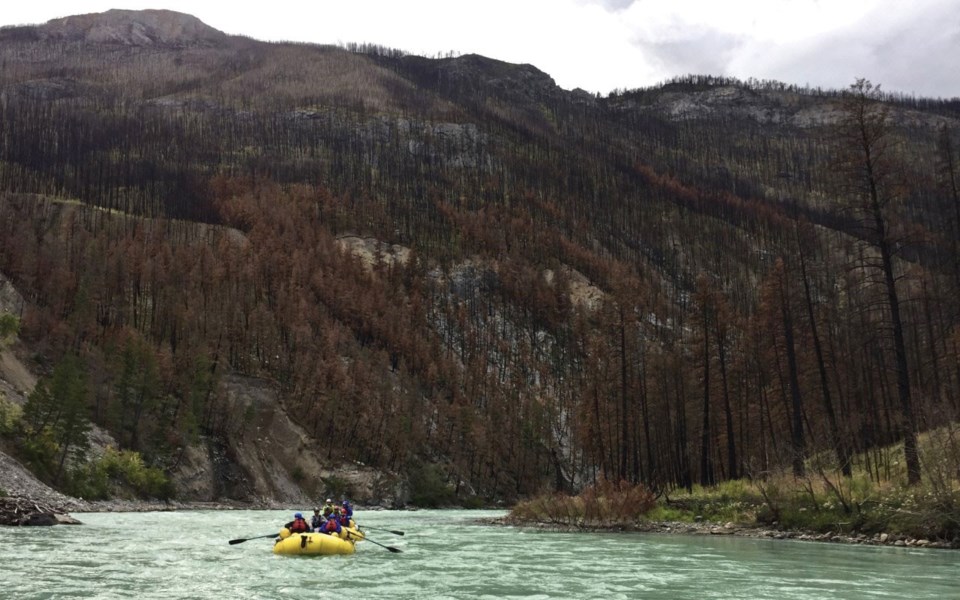 stark landscape Midway through the charred expanse of Hanceville Canyon on the Chilcotin River. Photo by Leslie Anthony

By noon of day three on our eight-day rafting trip across the Chilcotin Plateau last September, we've already left behind the Taseko and Chilko Rivers for the Chilcotin River—considerably less tantrum-prone but still a roller-coaster splashing up as cold rain pours down.

A lone grizzly fishing the river's edge resembles the brown rocks it huddles among. Each vignette plays out like a live episode of Planet Earth from our comfortable seats on the water, but the takeaway is clear: whether hunting salmon, each other, or merely feeding on sunshine, the flora and fauna tied to these rivers and surrounding forests are prodigious. And the import of this natural bounty on the people whose lands we traverse—the Tilhqot'in—isn't lost on us.

Then, with a suddenness that only river travel can deliver, the distant fire lines of the sizzling summer of 2017, visible for days on the horizon, descend in a monochrome of grey ash and blackened trunks—leaning, toppled, charred, and incinerated into a disquieting, chaotic jumble. Up close, the utter devastation overwhelms, even more mind-boggling considering the full area burned during B.C.'s worst-ever wildfire season—1,216,000 hectares—as well as the loss from nature's larder this represents for the Tilhqot'in. Yet not only local forests, wildlife and people have been affected: massive amounts of carbon that took thousands of years to sequester vanished back into the atmosphere in a geologic instant to add to Earth's current climate woes.

The burning has also revealed some of nature's most closely held secrets. A startling geologic phenomenon now sails past: where molten lava once poured across ancient river sediments—sand, cobble, silt, mud—the heat has apparently turned a layer of sand into glass. Or was it the heat of a fire?

In Hanceville Canyon, the river pinches, flowing heavy against towering walls. On a smooth face a metre above the swirling water hangs a wooden plank from which First Nations fishers, tied at the waist for safety, dipnet salmon. Fish have been caught and cleaned at this site for generations, as attested by pits piled high with recently discarded fish carcasses; finally, our eagle escorts seem satisfied.

Soon after, the canyon enlarges, revealing how the mountains towering over us have burned to their summits in intense firestorms. Days before, we'd seen these same mountains from above as we drove across the plateau to our start point in the Nemiah Valley west of Williams Lake; we'd stopped at an overlook to take it all in, startled by the way the burn had cascaded down to river level in such a steep gorge, but also how the stark, blackened pickets stretched a hundred kilometres to the western horizon.

No one in our seasoned group of international wilderness travellers had ever seen anything like it. According to the recent book Megafire: The race to extinguish a deadly epidemic of flame, by Michael Kodas, this pattern of incendiary scars offers a picture of the kind of heat, convection and winds created by a new category of climate-change-driven fire whose weather-making and self-perpetuating behaviours can't be controlled by any known method of fire suppression.

After bending around several long gravel bars, the river disappears with an angry swirl into a tight slot canyon. At its exit lies Big Creek Ecological Reserve, and where the eponymous watercourse joins the Chilcotin we pull into a campsite beneath a copse of Douglas-fir.

In use since the first days of expedition rafting in B.C. in the early 1970s, oddly, the area's open-canopy ponderosa is tinged by fire save for this forested enclave. As it turns out, in August 2017, the leader of our current trip, Tyler Dinsdale, heard that the historic site was under siege after government firefighters were forced to flee a firebreak there. Hoping to preserve the campsite for future generations, he'd rafted in alone, commandeering pumps and sprinklers left behind to keep the fire at bay. Dinsdale is heartened by the considerable regrowth that now greets us.

Next day is a layover, and a few of us hike to a nearby plateau; en route, we see how the fire has destroyed centuries-old junipers, and left some Douglas-fir standing while others exploded or were vaporized by root fires, their ashen ghosts now lying across the ground like the chalk outlines of bodies.

The plateau offers an overlook north to the fire-crowned canyonlands we've descended, and south to the bluff-rimmed grasslands we're heading into; the landscape's magnificence and diversity is mesmerizing, made more so by a glorious September day where pelicans heading south in V-formations suggest summer's last breaths, and thunderheads boiling up into a cerulean sky remind us of how, in an age of climate tipping points, a beautiful, bountiful land is only one lightning strike away from Armageddon.