'Play your part. Therein lies your greatness.' William Shakespeare It's not easy being an elite athlete. Fun maybe. Educational for sure. But easy? Never. Consider the case of Julia Murray.
Jul 22, 2011 7:25 AM By: Michel Beaudry 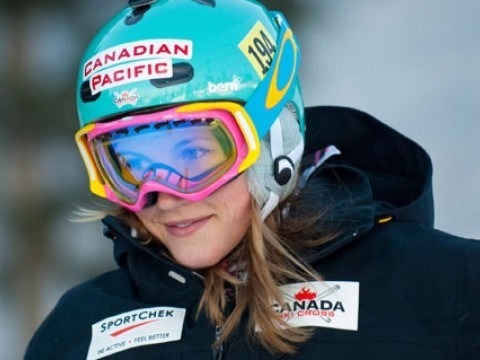 It's not easy being an elite athlete. Fun maybe. Educational for sure. But easy? Never.

Consider the case of Julia Murray. I don't think there's a Whistler resident out there who didn't follow the young skicross racer's star-crossed Olympic campaign in 2010 without a twinge of sympathetic pain or a stray thought about the madness of competition at this level.

Remember? Barely weeks before the big event, the 20-year old national team member tore her anterior cruciate ligament (ACL) so badly that the team doctors knew she would need surgery to repair the knee. But the question remained. Would she? Or wouldn't she?

The Canadian media ate it up like candy at Halloween. The daughter of a Crazy Canuck. Smart, strong and fast. And now hurt. Would she pull out of the Games at this late date? Or would she damn the torpedoes and go for the glory. What a story!

But few people were thinking about Julia the person back then. I remember watching all the action and worrying that the hype would lead her to the wrong decision. After all, she had a long life ahead of her. Was competing at the Olympic Games worth putting her body in such jeopardy? I mean, it's not like skicross is a gentle sport...

Everyone here knows what happened in February. Julia gritted her teeth, toughed it out and made it across the finish line in one piece. But it wasn't the glorious moment she'd envisioned during those long hours of training. Still, she'd reached one of the goals she'd always dreamed about. She was an Olympic athlete.

But wait a second. Maybe a quick flashback may be in order here. This is how it all began:

Julia never looked fully at her ease as a ski racer. Maybe it was the long shadow cast by her dad, Crazy Canuck Dave Murray that made it hard for her to enjoy the sport. Maybe it's just that she had other talents. After all, her mother, Stephanie Sloan was three-time World Freestyle Skiing Champion back in the mid 1970's. Maybe she just hadn't found her thing yet.

Whatever. When Julia discovered skicross racing in the spring of 2007, it fit her talents perfectly. Combining her dance and gymnastic background with her many years of ski-racing experience, Murray was able to slide into the new sport like an old pro at a Sunday ball game. Suddenly the veterans on the race circuit were looking at this rookie with newfound respect.

Less than six months later, Julia was named to the inaugural Canadian Skicross Team. Two months after that, she scored her first international victory at a Jeep Series event in Sun Valley. Buoyed by her surprise win - and gaining confidence with every race - Murray ended her season with a handful of podium finishes in Europe. "I'm having so much fun at this," said the ebullient young skier at the time. "We've got a strong bunch of racers, excellent coaches and a great attitude on the team. I can't wait to race again!"

By the time the Olympics came around, Julia was considered a legitimate medal contender at Cypress. She was improving at every race. Her focus, her aggression, her self-confidence, her technique even: it was all coming together.

And then disaster. "It all went by so fast," she moans. And then laughs - a happy crystal sound that belies her current condition. "I mean that whole month just flew by," she continues, "the crash, blowing my knee, going for the 'scope, talking to doctors, discussing my situation, and then deciding to compete - I hardly remember any of it..."

Sure the Olympic Opening and Closing Ceremonies were memorable. As was the way Canadians embraced their athletes. "It was great to see all the support," she says. But what she remembers most of that time is the tough months of rehabilitation that followed her post-Games knee surgery. "I worked so hard," she says. "But I got really strong. I felt super-prepared for the '10-'11 season."

Still, like most athletes coming back from serious surgery, she didn't feel like she had her act fully together when racing resumed last December. But she kept working at it, tweaking this and adjusting that. "The first few races," she says, "I couldn't get my confidence going. I was still skiing okay, but I just wasn't going very fast."

But that all changed at the X-Games.  "It all came together," she says. "I was finally skiing like myself again. And so I decided to really go for it..." She qualified in the top three and looked really good doing so. Alas, the women's course in Aspen featured a dangerous final jump that threw skiers way higher than they expected. Julia - skiing faster than she had all week - was one of those who got thrown, and thrown badly. Murray landed far down on the finish flats, nearly 150 feet from where she launched.

The result? "I knew I'd hurt my left knee again," she reveals, "but I immediately went for an MRI and all they saw was this small tear. So I decided to keep racing." She pauses for a beat. "You know, it's kind of funny. Both times I blew my knee, I did it on terrain features where I was really pushing myself..."

Meanwhile, she had her knee drained and painful injections of cortisone were applied.

The skicross team's next big event happened to be the World Championships. Although Julia knew she was hurt, she also knew that she'd found her form again. She couldn't give up yet. So she decided to race.

"I realized I didn't have a lot of races left," she explains. "I knew my knee wouldn't hold up much longer. So I decided to give it my all at the World Champs."

And she totally surprised herself. She laughs. "My coach, Willy Raine, told me I was skiing 'out of my mind' that day. And I think he was right. I really worked the course there." She laughs again. "I even made passes..."

Julia's hard work and newfound confidence paid off in the finals. "To finish second there - to win the silver medal at the world championships - it really made me happy. I was totally psyched."

Maybe a little blind to her condition too. Rather than taking her medal and heading home to get her knee looked after, she decided to support her home country's skicross program and attend the World Cup race in Collingwood, Ontario instead. Totally wrong move....

"I should have never raced there," she admits. "When I finally got a 'scope done after the race, they discovered that my newly-repaired ACL was completely gone..."

Not only that, but she'd lost so much cartilage in her left knee that she was grinding bone on bone. This time, said the doctors, Julia would need at least a year to recover from the surgery. Racing would have to be put on the back burner for now...

Most athletes would have been devastated by this announcement. But Julia seems to have taken it in stride. Her surgery behind her - and after a long furlough in Mexico with main-squeeze Dave Barr ("Where I was only able to surf on my tummy," she giggles) -Murray is back in Whistler and training harder than ever. "I'm doing a lot of road cycling," she says. Another mischievous grin lights up her face. "But there are a lot of nice easy trails around Cheakamus Crossing where we live so every now and then I take my mountain bike out too..."

Living at the Crossing, says Julia, is amazing.  "The gym is a two-minute walk away," she explains, "so when it comes to training, there aren't any excuses." And the sense of community in the new neighbourhood makes her feel totally at home. "There are so many locals living here," she says. "Davey and I keep looking at each other and wondering 'where the heck did all these people live before?'" She burst out laughing. "But it's great. It really feels right."

And the future? "Right now, I'm just happy to be at Whistler again. This winter I'll be attending communication classes at Capilano University." One last big rainbow grin. "And, with a little luck, skiing LOTS of powder here at Whistler. I hope we get the kind of snow we got last year..."