With the FEDERAL election right around the corner, we are all being bombarded with information about candidates, political platforms, background histories, opinion and more across all media forms.
Oct 10, 2019 12:00 AM By: Clare Ogilvie 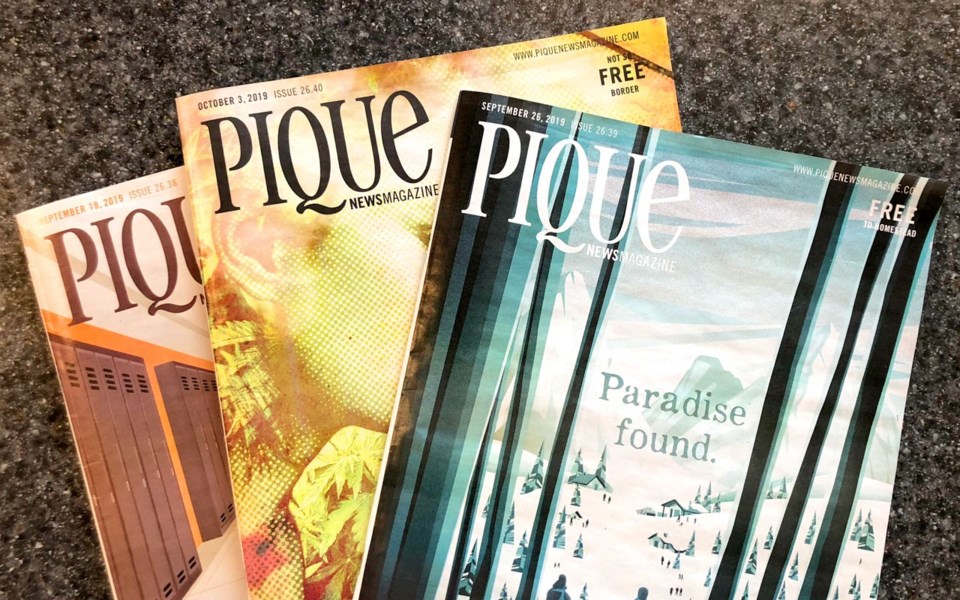 With the FEDERAL election right around the corner, we are all being bombarded with information about candidates, political platforms, background histories, opinion and more across all media forms.

It's enough to make the average person just tune out—indeed, the Oct. 7 English-language election debate might have been the final straw for many.

But I am here to give you hope on the news front.

I have worked in the newspaper industry for over three decades—from trade papers, to the Vancouver Province to my time here at the Pique and I can honestly say that we are always working to reflect our community of readers and bring you accurate, informative and trustworthy stories.

This week is National Newspaper Week and it has made me reflect on the role of print media and the trained journalists you read each day.

Pique's editorial team—Alyssa, Braden, Brandon, Dan, Joel and Megan—are all post-secondary journalism graduates with years of experience. Our columnists are no less talented! They are multiple award winners. I am not sharing this with you as a form of naval gazing. I am supporting the institution of journalism, as it is assailed by fake news and fake reporters.

I was horrified to read last year that in an Ipsos-Reid poll 63 per cent of Canadians were unable to distinguish between real news sites and fake news stories.

With the situation south of the border, and the fact that Facebook has been forced to accept its role in fake news proliferation, media users are rightly concerned about the trustworthiness of the information they consume.

That is why it is so important to look at the source of the information. Is it from a recognized and trusted source written by trained journalists? If it is not, find another place to get your information. Lobby groups and those pushing an agenda are never going to give you the whole story.

That's not to say that some newspapers don't declare their political leanings, but this should never be reflected anywhere in the news, sports and arts sections of a quality paper. (I am relying on the fact that our readers know the difference between an opinion column and a news story.)

There is a price for fake news and some journalists have paid with their lives. In the U.S., President Donald Trump routinely calls journalists "enemies of the people" and this has allowed people to feel they can strike out at reporters. I'm recalling the murder of five employees of the Capital Gazette last year in Annapolis. Indeed, reporters are killed all over the world every year as they strive to bring you the news.

While this is extreme, and is unlikely to happen in Canada, the barrage of misinformation on topics from vaccines, to the climate crisis, to eating habits creates a toxic environment for reporters to work in. Imagine if every word you wrote was scrutinized, then anybody could call you up, or email you, or reach you on social media and call you a liar, or threaten you, or try to publicly shame you—welcome to journalism in today's world.

It is true that newspapers have been reporting on the closures of community papers across North America—the result of shrinking advertising revenues and growing digital platforms.

But despite this, community newspapers have more readers than ever with nearly nine out of 10 Canadians consuming print and online news every week, according to the latest research from News Media Canada.

And, let's be honest—it is the advertising dollars alone that allow papers like Pique to keep going. These dollars are supporting local journalism, which is being squeezed to death by mammoths Facebook and Google—they gobble up 75 per cent of the online advertising revenue in Canada between them.

So a huge thank you to all those who help support Pique in its goal of bringing you independent and meaningful news, sports and arts coverage.

Here in the newsroom, we pledge to continue to do the hard work of asking questions and telling you stories you might not otherwise hear.