Kelly Hand – Investing heart and soul into the Whistler community

When Kelly met Mike she had no intention of living in Whistler. In fact, she barely knew what the place was about.
Dec 11, 2009 5:56 AM By: Michel Beaudry 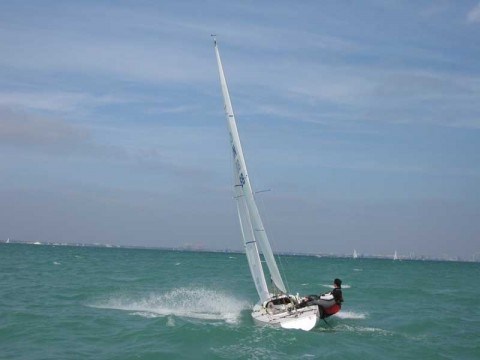 When Kelly met Mike she had no intention of living in Whistler. In fact, she barely knew what the place was about. A top-rated sailboat racer - a former World Champion and Pan Am gold medallist - Kelly Hand was far too busy mounting a comeback bid for the 2008 Olympics to pay much attention to the chichi ski town north of her training base.

"I wax living in Vancouver and skippering a three-woman boat called the Yngling," says the irrepressible 34-year-old. "But it was tough. Trying to pull it all together - fundraising, training, travel, equipment - it was a massively expensive campaign to manage." She sighs. Laughs. "I could feel we were there." She stops again. Shrugs. "We were so close. But it's so hardcore now. It cost us over $50,000 for the boat alone. All our energies had to be focused on the task at hand..."

Fast-forward three years. Now married, pregnant, and just about to close on a beautiful view lot in the Rainbow development - not to mention recently becoming the newest employee at the Whistler Museum - Hand has immersed herself in local community life like few other Whistlerites of her vintage.

But then maybe that's what happens when you fall in love with Whistler's unofficial Mayor Of Fun. "He's an amazing guy," she says with ill-concealed glee of nouveau hubby Mike Varrin. "I don't know if I've ever met such a good person. Selfless and funny and full of joie-de-vivre without even trying, Mike is truly what he appears to be. His spirit is infectious."

So is hers. The quintessential girl-next-door, Hand brings a wisp of uncontained effervescence to her character that is utterly disarming. A square-cut, sporty looking gal - rosy cheeks and blue eyes, dark hair to her shoulders - she virtually exudes good-willed enthusiasm. Wears a smile like a comfy warm bathrobe. Has good things to say about just about anything.

But don't make the mistake of underestimating her. She's as comfortable chasing down a puck on an ice rink as she is skippering a boat on the open sea. As disciplined and focused in her business dealings as she was playing marine chess against the world's best. In other words, Kelly Hand is exactly what she appears to be too.

"I grew up in a little farm town in southwestern Manitoba," she recounts. And giggles. "A place called Carman. Really small-time you know. There was only one set of lights in the whole town." Her summers, she says, were spent on Lake Of The Woods on the Ontario-Manitoba border. "My father has a real adventurous spirit," she explains. "First he bought an albacore and then a CC 24. That's where we all learned to sail."

Hand's competitive sailing career was launched when she was 13 and chosen to crew for a much-older - and seriously competitive - skipper. It truly was a life-changing moment, she says. "I was fast-tracked from being crew on my father's boat to racing in the elite ranks of the North American circuit." She stops. Smiles at the memories. "The skipper was a rock star. I mean, we finished second that summer at the North Americans. It was an amazing learning experience, for sure!"

Hand eventually moved on to skipper her own boat. But success kept right up. Canadian Youth Champion in 1991 and 1993, she made her first national team in the summer of 1992. Seven years later, and newly crowned world's best in the Laser radial class, she returned to her home province for the Pan Am Games and a raucous reception from her local fans. "The regatta was in Gimli on Lake Winnipeg," she remembers. "It was awesome. My family, my cousins, my friends - they all came out to see me race. For me, personally, it was really memorable. It was a once in a lifetime opportunity to show my peers what I did for a living; what elite sailboat racing was really all about."

But it wasn't without its risks. "I came to Gimli with a world championship medal around my neck," she explains. "For sure, expectations were high." Another pause. She giggles again. "Luckily I was able to win there too..."

Considered something of an esoteric discipline by mainstream sport enthusiasts, sailboat racing is not for the faint of heart (nor for the faint of pocketbook). "Big races are like psychological marathons," explains Hand. "You might have to sail 12 races in five days. And that means having to stay calm in all sorts of conditions. You have to be really steady too." She smiles. "You see, it makes a huge difference to your final standings if you can hold it together for all five days of racing. One slip and it's pretty much over."

Which she admits she learned all about during a disappointing post-championship year. "I thought I was in really good position to make the Olympic Team for 2000," she says ruefully. But it was not to be. "My training partner qualified well and early and surprised everyone - including me." But the biggest surprise came when Hand was asked by her erstwhile partner to travel to Sidney as her coach. "So we went together," she says. "And after Sidney I was recruited to become national team coach. Which I did until right after Athens in 2004."

She says she learned tons as a coach. "Patience, empathy, leadership, psychology, team work - it takes so many talents to make a good coach. As an athlete you're way more one-dimensional. As a coach you can't help but see the world as a complex place."

Which, in the end, is what convinced her to return to racing. "I thought I could apply some of the lessons I'd learned as a coach," she says. She lets escape another long sigh. "You know, strategic and tactical stuff... but technical too. Did you know, for example, that the Yngling has 25 different controls? There are so many things that you can tweak and adjust and change on these Olympic-class boats. I mean, experience really counts for something in this sport."

As does fundraising and team management. And for the young racer-cum-team-manager, it was all too much too quickly. And then she met Mike.

"At first we were just friends," she says of the legendary bar manager she met in the spring of 2006. "And that was fine with me." One of the resort's best-loved bon-vivants , Varrin wasn't particularly looking for a long-term date either. But the gods had other plans. "I came back from an utterly disastrous campaign in Europe and Mike immediately whisked me to a friend's fishing lodge up the coast." She sighs happily. "It was magical."

The budding romance didn't do anything for her sailing though. And by the next spring, she knew it was over. "It just wasn't happening," she says. "Lots of bad luck. Lots of roadblocks. So I decided to cut the cord." But it wasn't that straightforward. "It was really, really hard," she admits. "Lots of tears. Lots of soul searching. But in the end I knew it was the right decision. We definitely felt like we'd pushed it to the limit."

Meanwhile, Hand had completed an undergraduate degree at Kings College in Halifax and was looking for a new challenge. "I was working for a friend in the city, getting my feet under me so to speak, when I saw the job posting at Origin Design & Communications and I thought to myself: 'Why not?' I was already dating Mike and here was this chance to work and live at Whistler. I was at a point in my life where I was ready for something entirely new."

It's a decision she's never regretted. "I'm a small town girl and Vancouver was just too big and busy for me. I couldn't connect there. It's different at Whistler. It feels right. Like meeting people and feeling you're part of a group going in the same direction. Know what I mean? There's a real community here - and I feel like I'm part of it now."

Kelly and Mike were married in the spring of '09. By the spring of 2010 they'll be welcoming a new child into their lives. A few months later they'll be the proud owners of a new home. It almost takes my breath away to see how quickly - and positively - the couple is investing in the future of this place. And they're doing it at considerable personal risk. "No question - it's happening very fast," says Hand. "But we can't really count on anybody else for advice. After all, Whistler is such a unique place. The bottom line for us is that we believe in the town and we believe in the people who live here. That's why we're going for it!"

She laughs long and hard. "It's making me look at this place in a really different way though. I mean, I read the papers now and worry about taxes and what's going on in council meetings. Two years ago, it was like 'who cares?'"

Before we part, she wants to make sure I'm up on her latest project. "Do you know the Whistler Museum is having its grand opening next week on Dec. 17 th ?" Totally renovated and boasting entirely new installations, the museum, says its newest employee, has been re-designed to be more than just a place for collecting old archives. "We want the museum to be fresh because we see Whistler as fresh," she explains. "We see it as a community gathering place, another cultural layer to Whistler if you will." Her face erupts in a radiant smile. "So can we count on you being there for our grand opening?"

Of course you can. How can I say no to that kind of positive energy?