In the southwest corner of the Yukon Territory, 150 kilometres west of Whitehorse on the Alaska Highway, you'll find Kluane National Park and Reserve—a place you will write home about.
Aug 18, 2019 1:00 AM By: Leslie Anthony 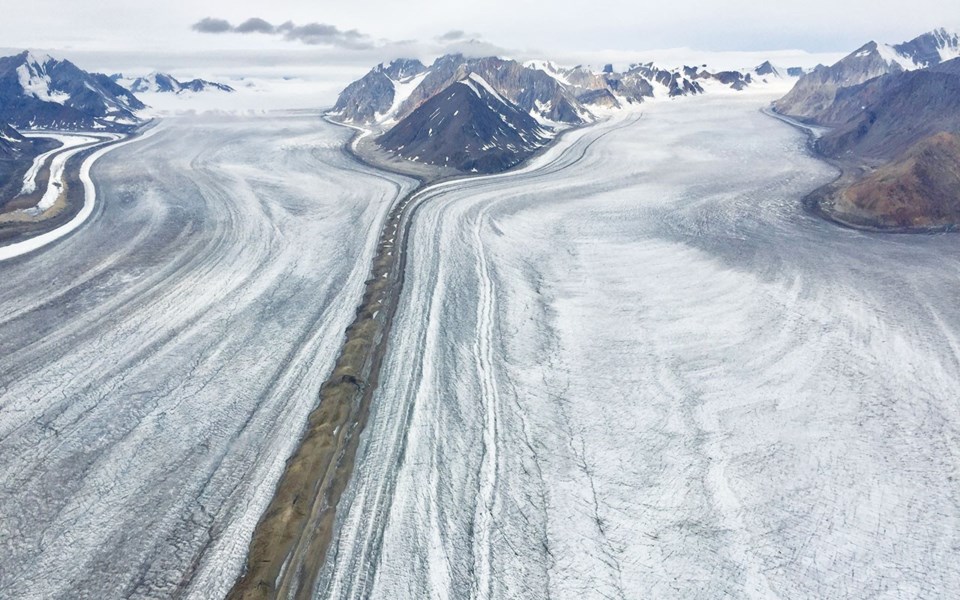 In the southwest corner of the Yukon Territory, 150 kilometres west of Whitehorse on the Alaska Highway, you'll find Kluane National Park and Reserve—a place you will write home about. It's the biggest of the big and wildest of the wild in a land brimming with a smorgasbord of big wilderness set-asides.

Our plan was to fly over the icefields, but dicey weather found us waiting it out at the Kluane Visitor Centre, located in the Da K Cultural Centre, a veritable Science World of award-winning digital exhibits (like a 3-D topographic model of peaks and icefields in the St. Elias Range), informative panels, cultural artifacts, and stunning videos. When we got word we were officially grounded, we drove the highway toward Alaska, stopping at Kathleen Lake to skip rocks in its clear waters and watch grayling rise to feed on tiny insects. The half-kilometre Kokanee Trail boardwalk led to a trail that skirted a point to a pair of Parks Canada's famous red chairs. Views from here were great, but couldn't beat those from the five-km King's Throne Trail that followed the lake's south end up into an alpine cirque.

With the sun coming out we drove a little farther to check out Million Dollar Falls, a roaring cataract in a slot canyon. En route, we were treated to a slow-roll roadside video of a cinnamon black bear plodding through fireweed in a shallow ditch. Hoping for better weather next day, we spent the night at Dalton Trail Lodge on Dezadeash Lake, the Yukon's only road-accessible fishing lodge, loaded with rustic charm and prodigious old-school taxidermy.

Morning promised a brief weather window, and so we high-tailed it north an hour to Icefield Discovery's base at Silver City, a dirt runway and one of the tiniest historic specks in a land of tiny historic specks. Splitting our group into two ski planes, we took off across the head of massive Kluane Lake and onto the astoundingly long Kaskawulsh Glacier, which, even from the air, ran to the horizon and split around two enormous peaks. We'd planned to land on the ice above the neve line in view of Mt. Logan, but fog forced us to detour from the Kaskawulsh's pinstripes and pop through passes, sweeping along the lower reaches of other glaciers—each a heavily fractured spoke in a wheel whose hub was the largest non-polar icefield on Earth.

Facts learned at the Visitor Centre became obvious from the air: the ice that makes up 82 per cent of Kluane's surface area; glaciers up to 80 km long; the sheer size of the St. Elias Mountains, Canada's highest and most massive peaks (Logan is not only Canada's highest, but the largest non-volcanic mountain on Earth). Despite growing cloud layers, we could see several key peaks—Logan, Vancouver, Queen Mary, Elias and Steele. All the while pilot Tom walked us through every bump in the air so no one was surprised by the mild turbulence as we rounded precipitous faces into new valleys. He also pointed out animals on the faces below: I counted some 114 mountain goats and half as many Dall sheep.

There were other lessons to learn from the air. Though some 200 glaciers have been lost here due to climate change, others occasionally surge due to the large amounts of snow deposited from Pacific storms. These back-and-forth ice dynamics can result in small-scale watershed reorganization. As an example, in May 2016, most of the Slims River—a headwater stream of the Yukon River that flows to the Bering Sea—was diverted into the Kaskawulsh River, a tributary of the Pacific-flowing Alsek River. This likely permanent change in drainage happened over only a few days. Likewise, glacial Lake Alsek, which formed many times due to blockage of the Alsek River by the Lowell Glacier, has drained just as often. Several hundred years ago it was the largest glacial lake in western North America, covering what's now the village of Haines Junction and a large section of the Alaska Highway, along which you can still see relict beaches and huge ice-rafted boulders. Around 1850, the ice dam broke, draining the lake in two days at a flow rate comparable to the Amazon River. The flooding associated with advances and retreat of the Lowell Glacier are the subject of many local First Nations legends and stories.

Because aerial views offer the ability to put together the puzzle of the land from the air—a kind of geo-realization if you will—our flight with Icefield Discovery proved just the ticket to unlocking the grandeur of Kluane. And I definitely wrote home about it.