When I arrive at Meadow Park's fitness studio, the beats are already pumping. Because the studio shares its air system with the gym above, it's also freezing. That won't last — the music is already making me sweat. Or maybe it's fear.
Dec 21, 2016 5:00 PM By: Leslie Anthony 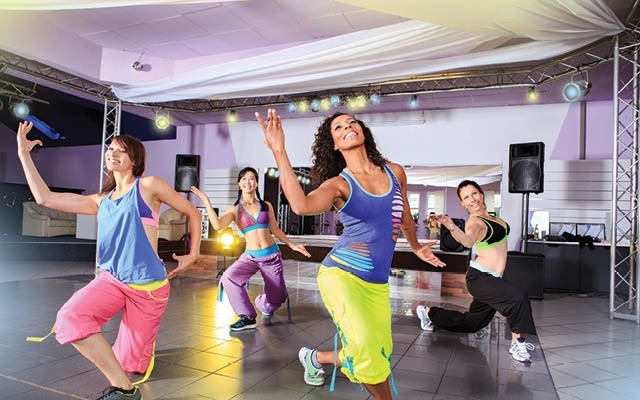 When I arrive at Meadow Park's fitness studio, the beats are already pumping. Because the studio shares its air system with the gym above, it's also freezing. That won't last — the music is already making me sweat.

Instructor Susie Douglas steps to the front of the room, says a few words to assuage the inept (well, probably just me) and we're off, stepping and swooping, ostensibly to the music. My first impression is of being in a bad music video — which I am making infinitely worse.

The class is an hour, but the sum total of time I've spent dancing in the past twenty years might be half of that. Still, I manage OK for one song. Then the hiccups start. Unlike yoga where you follow vocal commands, in Zumba you mirror the instructor (they're facing you, so if they move right you move left). And they're silent, using hand signals to direct movements — to the side, forward, in circles — as well as the number of repetitions. It's a lot for an untrained brain to process, thus my repeated rookie mistake of mirroring not only dance moves, but hand signals.

With a background in dance and aerobics, and on the lookout for interesting new iterations of either, Douglas took her first Zumba class eight years ago, bonding immediately. In 2014, motivated mostly by wanting to enjoy more of it, but with an eye to teaching when the time felt right, Douglas stepped into Zumba training. After encouragement by another Whistler instructor to assemble a choreographed routine, she was soon sharing her love of Zumba with acolytes, finding it one of the most rewarding experiences of her life.

While those around me reap those rewards, I'm one step behind, with the distinct feeling everyone is moving in a direction opposite to mine. And once I've lost the thread, the thoughts come fast: I used to know how to dance... was it in high school?... or that wedding in Scarborough — no wait, I was just really drunk there.

"You usually need to come about four times before it all clicks," says Douglas.

No doubt. For the moment, there's sensuality to much of the movement that I'm genetically incapable of. They see shimmy and shake, I see dislocation and sprain. Discombobulated from spinning with arms above my head like a Club Med commercial, I panic: Something doesn't feel right... do I have a heart defect?

Given that I'm flanked by 60-something women who are having zero problems, I'm probably fine. In fact, better than. I'm getting a physical workout and a clinic in coordination.

Zumba is the largest fitness brand in the world. Each week, an estimated 14 million in 150 different countries take classes. Its popularity is easy to understand — a fitness class that feels like a dance party. The very intention of its founders.

In 1986, aerobics instructor Alberto Perez forgot his music at home. Instead, he used a fun mix he had on hand, incorporating a variety of hip-hop, salsa, martial arts and Bollywood-style dance moves. It was an instant hit, and when he moved from Colombia to the U.S. in 2001, he continued teaching it. Here, entrepreneurs stepped in. After hearing about his mother's new dance class — "the only one I've done that doesn't feel like exercise" — Alberto Perlman saw a branding and marketing opportunity. Working with Perez, he and a friend created a late-night infomercial and workout tapes that took off like wildfire. Zumba was born.

"Participants of every age, gender, and fitness level celebrate music and dance from all over the world while getting a great workout," says Douglas, decked out in the wild prints and vivid colours that now define the brand. "It leaves them happy and energized, and there's a kinship amongst participants; it's a great way to make friends"

So far, my only friend is a water bottle, which I canoodle desperately between songs. Having my incompetence amplified by mirrors everywhere is also proving a serious enemy to progress. I write a simple note on a clipboard and flash it at Douglas' daughter, Kiera, otherwise occupied on an iPad off to the side. It reads: "Help!" She laughs.

I return for a second session, to the bewilderment of everyone I know. I want to give it another chance as per Douglas' entreat, but also because I don't like admitting defeat.

This time I'm off the back from the start. By the time I figure out where my foot should go, Douglas' is somewhere else. I'm dancing like Seinfeld's Elaine. There's a "Not this again" kind of sluggishness to my body. My legs refuse to move further than the width of my shoulders. My sashays and shimmies are off. Everything seems too damn fast. In fact, it feels like my neurons are on strike. I have to get control!

"Good job, Leslie," says Douglas. "You're doing so much better this time!"