When a laundry list of Sea-to-Sky hikers tells you they've never heard of the trail you plan to hit, you know you're on the right track. Such was the case before our four-day, 40-kilometre hike of the Sunshine Coast Trail.
Jul 4, 2018 6:00 PM By: Leslie Anthony 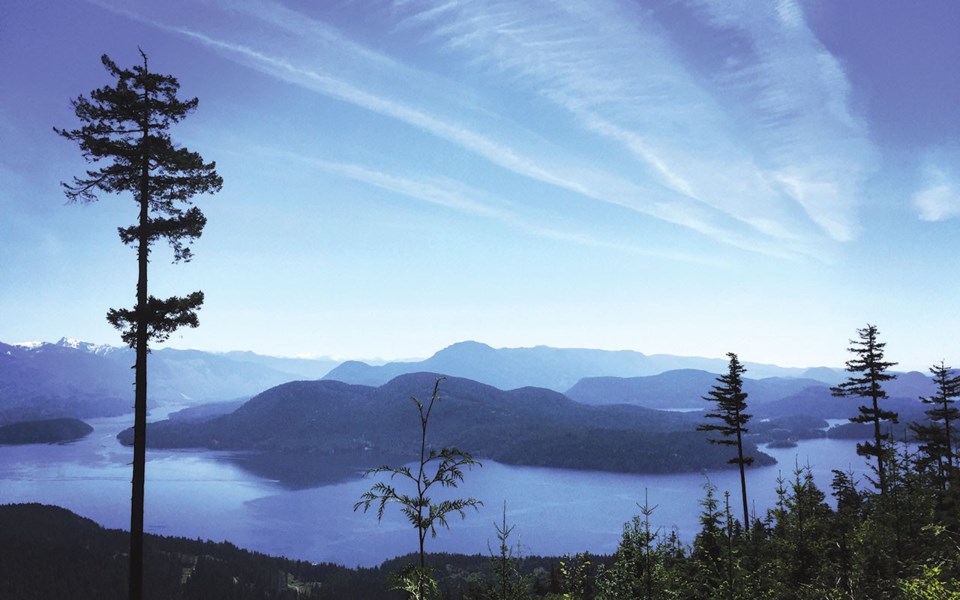 WEST COAST HIKING They don't call it the Sunshine Coast for nothing. Pictured here the view to Nelson Island from halfway up Mt. Troubridge. Photo by Leslie Anthony

When a laundry list of Sea-to-Sky hikers tells you they've never heard of the trail you plan to hit, you know you're on the right track. Such was the case before our four-day, 40-kilometre hike of the Sunshine Coast Trail.

Though talked up in some circles, the Sunshine Coast Trail (SCT) remains largely unheralded. This, as it turned out, was a good thing, as our quartet planned the trek for the tail-end of the busy May long weekend.

The 180-km SCT stretches from Saltery Bay in the south, where the ferry arrives from Earls Cove, to Sarah Point on Desolation Sound in the north. The concept dates to 1992 when the newly formed Powell River Parks and Wilderness Society (PAWS) started working on trails to link up the last accessible stands of the region's rapidly vanishing old-growth forests.

Though pillaging of the Sunshine Coast by the rapacious logging industry was worse than many places in B.C., the SCT has snatched outdoor-recreation victory from the jaws of wanton destruction. Joining protected areas with forested trail corridors, it traverses landscapes as diverse as coastal shorelines, lakesides, riparian areas, swaths of old-growth, and stunning mountaintops. PAWS—whose volunteers work on fundraising, trail maintenance and hut building—clearly believes that the best way to protect trails is for people to use them. And use them they do, with hikers attracted from around the globe. The SCT currently boasts 14 huts, making it Canada's longest hut-to-hut hiking trail. And there's a hard-to-believe bonus—it's also the only free one, making for some of the best outdoor adventure value on the continent.

Before starting, the four of us rendezvoused at a cabin on an arm of Desolation Sound to wait out the long weekend crowds. Not only did we achieve this, but, while walking the dog one evening, were treated to a National Geographic moment we'll never forget—a pod of orcas had cornered a seal in the bay and was teaching its younger members how to hunt, a lesson that in whale-dom involved tossing the seal in the air—a gritty demonstration of the axiom "nature red in tooth and claw."

Buzzing from the experience, we started our hike on the holiday Monday. After a car drop, we headed back to Saltery Bay and a six-km section that skirted the coast, alternating between shadowed forests and open bluffs of gnarled arbutus overlooking the ocean. Other than the revolting sight of a fish farm, minimal physical challenge and maximum scenery were a great way to warm up with heavy packs on a sweltering day (remember how it was summer back in May?). Two hours later, we arrived at Fairview Bay Hut, set above an inlet. First of the SCT huts, built in fall 2009, it was the prototype for the trail's open/partially open shelters until it was fully enclosed in 2014. We combed the beach and snoozed on some rocks, watching seals watch us with the ferry tracking back and forth on the distant horizon. Though we fully expected company, it never materialized—at least not the human variety. Sleeping outside that night, we were awakened by an odd type of heavy breathing. Naturally, we thought it was a bear, until we realized it was coming from the water: whales were scratching themselves on the barnacled rocks at high tide.

The next day was a big one—sea level to the 1,300-metre summit of Mt. Troubridge, with significant upping-and-downing between. The trail left the coast almost immediately, tracking slowly up through second-growth before jacking up to staircase steepness. We then lapsed into a rhythm of punishingly steep forest followed by amazing overlook—either inland to the Powell River chain of lakes or oceanward to Nelson Island. After six hours or so we entered the final stretch—spectacular old-growth pocked with snow and, strangely, hundreds of toads everywhere, as if they were coming out of hibernation from beneath the melting snow. As we crossed the summit we were walking on two-metres of snow, which continued all the way to Troubridge Hut, located a kilometre below the summit on a small pond, where we once again found ourselves alone.

The 14-km climb had taken eight hours but was worth it. Troubridge Hut is a masterwork Douglas-fir log cabin that was pre-fabricated elsewhere and reassembled by PAWS on the mountain. Despite the snow, the temperature was never uncomfortable, and as soon as the sun dipped frogs started calling and stars wheeled in the sky.

The next day's 13-km downhill wound through every type of bioregion on the coast, eventually landing us in thick greenery at the spacious Golden Stanley hut, completed in 2016. We still had the place to ourselves for an evening campfire. In the morning, it was only five kms back to the car drop along the Lois Lake shoreline, and from there a quick jog to the ferry.

On the crossing, a woman asked what we'd done to get so tanned. "Not much," I answered. "We just hiked a section of the Sunshine Coast Trail."