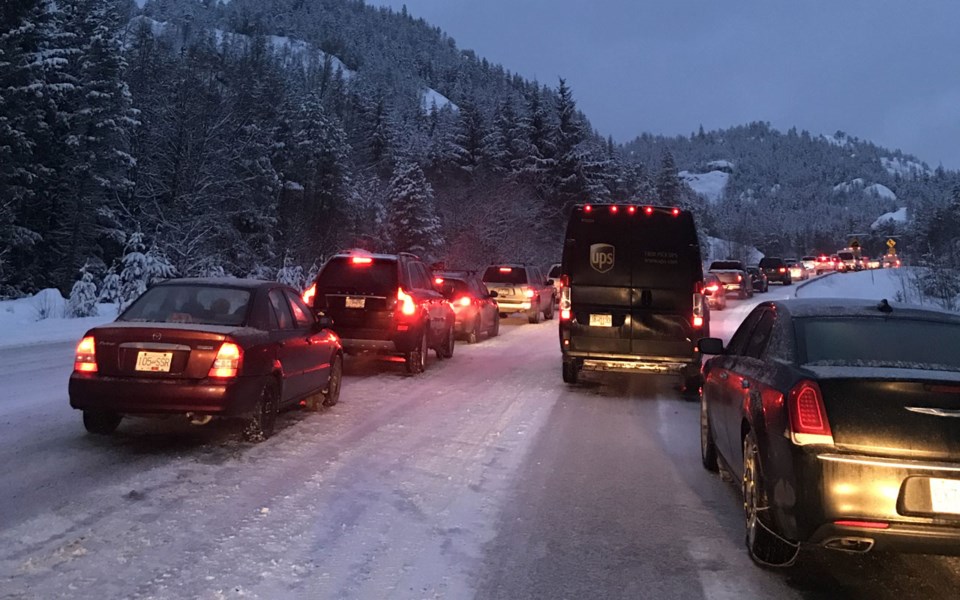 We shouldn't be seeing huge lineups of vehicles in or around Whistler during COVID-19.File photo by Alyssa Noel

I am writing to inform you of my displeasure with the BC NDP’s recent COVID-19 response.

The B.C. government started off well, but in the last few months has failed the people of B.C. I have voted for the NDP in every provincial election I have voted in, but that will likely change come the next election.

It is time for the government to actually take action and stop simply “suggesting” people follow recommendations. Actually lay down proper restrictions and enforce those limited restrictions that have been implemented.

I hear news reports of Americans heli-skiing and spreading COVID-19 in several regions of the province. Why did these tourists not have to quarantine for two weeks?

Then I try to go skiing in my hometown and see line-ups so long that it suggests half of Vancouver is in Whistler.

I understand there is some social distancing spreading out the line-ups, but these are the longest line-ups I have ever seen in Whistler. They are allowed to do it, though, because the government just strongly recommends that people from outside the Sea to Sky don’t go to Whistler.

For weeks I listened to the government representatives, including [Health Minister] Adrian Dix repeat that they strongly recommend wearing masks in public indoor places. When asked why they did not mandate it, they would just repeat “we recommend it,” as if such a recommendation would mean anti-maskers, etc., would suddenly wear a mask indoors.

It took weeks for the government to implement mask rules, despite the science suggesting it was effective in mitigating the spread of COVID-19.

It is also time to close the provincial borders. I know personally people travelling home to Alberta and Ontario to visit family. I tell them they should not be travelling and they respond that the borders are open and they are allowed to travel and they are technically right.

The NDP can’t point its fingers at the federal government on this one. There can be no clearer signal from Ottawa than its silence and inaction when other provinces closed their provincial borders. The precedent has been set.

B.C. and Canada in general are taking half measures and we are paying the price for it.

People will make the economic argument for these half measures. An economic argument, however, can also be made for a strong response that reduces COVID-19 numbers relatively quickly. Jurisdictions like Australia took harsh, but short-term, effective measures, and are reaping the rewards now, as they have limited COVID-19 cases and are living relatively unrestricted normal lives.

They are even attending large-scale public and very profitable events.

The dilemma of inter-provincial travel

In response to an opinion published recently about outsiders vacationing in Whistler, here is our dilemma: I live in Quebec and have been a regular winter Whistler visitor since 1982. We had a vacation planned in March 2020, which we [obviously] had to cancel.

We got a credit for our 10-day Edge Card if we bought one for the 2020-21 season, which after reflecting [on], we did—hoping to be able to come.

We haven’t reserved either plane tickets or lodging yet.

We have been respecting recommendations about COVID-19 since last spring, we work from home [and] hardly see anybody outside our bubble. We think that by following the same guidelines if we travel we will not be, or put anybody, at more at risk.

Planes are flying; the resort and the province of B.C. are open. We would travel within our country and take great care for all prevention measures.

But ... this would be contrary to present recommendations asking to avoid unnecessary travel.

If Whistler Blackcomb/Vail Resorts could confirm to us they would give us another credit for our ski pass, for next season, we would probably cancel our plans.

I have sent an email about the matter a few days ago to customer services, but we did not get a response yet, although they expect to reply within 48 hours.

I won’t be broke if I lose the value of that pass, [but this could be true for] less-fortunate people than me.

Of course, it is probably less risk if we stay home, but how much less risk? I don’t know what to think anymore as I am writing this.

I suppose I am not the only one facing this dilemma, which probably explains why certain visitors have decided to travel to Whistler.

I just wanted to share my thoughts with you.

I think for the first time in a long time, I can honestly say what a pleasure it has been dealing with the current Whistler Blackcomb staff.

In the past month, my family and I have seen everything from two dads in vehicles screaming at each other over our parking spot when we left mid-morning to a tall, agro man repeatedly hold up the line so he can yell at the small snowboard chick behind him to the feisty, pissed-off lady who scolded and then “reported” on two young men standing at the front of the line waiting for their friend.

[The two men] said they were in line for a long while and then stood to the side at the front of the gondola to keep waiting for a friend. Hubby pretty much told them that that ain’t how it works and they might want to get a coffee while waiting for their friend instead. [Then there was the] large, male visitor from Vancouver getting in the face of one of the cheery mountain hosts for making him wear his mask— luckily, [the host] was a care worker and not fazed in the slightest—to everything in between.

And during these instances, the Whistler Blackcomb staff has been extraordinarily patient and reserved and going out of their way to resolve these conflicts with aplomb.

Perhaps it is because quite a few seem to be British, if not locals, but almost every day we go skiing, an employee has made me feel proud of our mountains. (The snow has helped with that, too.)

Also, the number of times during our nine or so ski days we have been told to remain staying [two metres] apart and keep our young boys’ masks over their noses while in line has almost been embarrassing.

So, thank you, Whistler Blackcomb. You are doing the best you can keeping the mountains open safely to the best of your abilities.

I personally like the reservation system—don’t want it forever, perhaps—but regardless, I depend upon skiing as my winter exercise and energizer, and am very grateful to be able to enjoy it this winter.