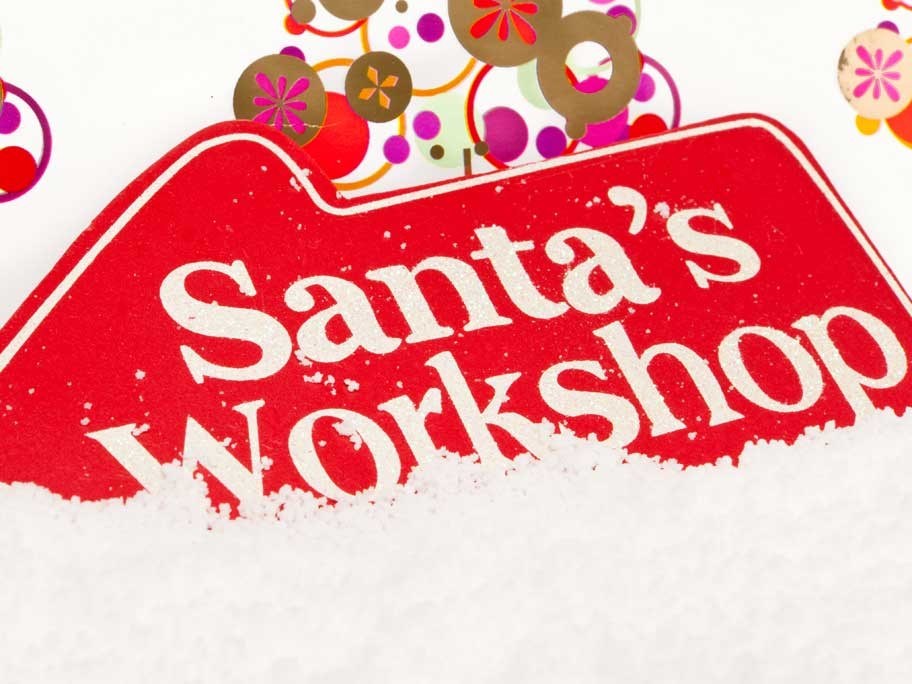 Spring Creek Community School and Ecole La Passerelle held our Annual Santa's Workshop again last Friday and it was a huge success. We raised over $1,500.00 for the Whistler Food Bank and Christmas Hampers.

The event was such an amazing community effort and was all about giving. Our staff, PAC, Whistler Community Services staff, Spirit Team student leaders, and parents worked hard together to advertise the event, gather, organize, and arrange the gifts and festively decorate the workshop. All the donated gently used, or new gifts items, came from our school communities. On shopping day the parents and Spirit Team students were back to help students select gifts for their family members and wrap them.

Our younger students were so proud to carry home a precious gift that they bought and wrapped themselves. It was a lot of work, but the smiles on everyone's faces were beaming with the joy that comes from the personal sense of giving of time to help and support our community.

We are so lucky to have such amazing staff, parents, and students in our schools. Taking part in events like this can only help our kids become strong community leaders as they grow.

To our parents, staff, Spirit Team, students, Community Services colleagues and Joern Rohde for taking pictures, thank you for making this such a fun, heartwarming, and valuable event. Start saving gently used items for next year! We'll be collecting again — sooner than you will believe.

I'd just like to thank all the staff at the Whistler post office in Marketplace. Every time I have been there they have all been so helpful and cheery!

Today one of the lovely ladies saved me over $70 in postage costs after shuffling my Xmas presents into a few packages. She has certainly made my Xmas a merry one and I'm sure the whole staff will continue to make many more!

I was shocked but not surprised to see another consultant was hired by the Muni at the cost of $103,000 tax dollars. It makes sense to me now why when asked during the election the former mayor refused to tell us the cost. The shocking part was the report didn't contain any of what my friends and I were hoping for.

Things like downsizing departments, eliminating some, suggesting multi-tasking or that our government is too big.

Average Canadians make just over $37,700 per year; it's safe to say that many of us can only dream of earning six figure salaries. Yet for managers at the RMOW and those involved with satellite organizations of the RMOW, a six figure salary isn't just a pipe dream — it's a reality.

Below are 13 examples of just some of the salaries that aren't mentioned in this latest consultant's report as a concern.

It is my understanding that the above does not include benefits or perks such as $700/ month car allowances, gas, insurance and repair bills on their vehicles that was kindly divulged to us due to a termination/retirement lawsuit fiasco earlier this year.

I may have helped us save at least another $100,000 in future consultant's fees in shedding light on another area that needs attention paid to it.

Let's hope that our new mayor and council take a good look at this and certainly do not give these people the eight to-forty per cent raises that were given to them the last three years while the rest of Whistler was either dealing with wage freezes or rollbacks.

To put the above salaries into perspective Statistics Canada lists General Practitioners and Family Physicians make an average salary of $132,615.

I am sure the community and new CAO, mayor and council will not let this and other similar things caused by the last regime go on. There will be some short-term pain for some long-term gain to change this bubble created at the hall and get our beloved community back on the right track.

(Editor's note: The salary figures are taken from the SOFI report of 2010. Whistler's new CAO is earning less than is quoted above in the 2010 figure, and according to the RMOW, the consultant's report cost $88,520.)

Time for a change?

I wanted to take a few days to reflect before writing my response to what was supposed to be a "General Meeting" for Squamish Chamber of Commerce members held Monday December 6, 2011. The Chamber, and by extension the reputation of those associated with it, have sustained serious damage as a result of how this evening was conducted.

The supposed General Meeting was properly called under our bylaws, which also require that the Chair accept motions at a General Meeting. The petition signed by members explicitly said that members wanted to call for a motion for appropriate action resulting from the meeting. The event on Monday December 6, therefore, does not satisfy what the members lawfully asked for.

I understand that due to the matter at hand there may have been some topics the board could not discuss, but surely a lawyer cannot tell a Chamber that it cannot have a proper General Meeting at all? Regardless, if this Board's actions have made it incapable of performing its duties (which include holding General Meetings with motions) doesn't this Board need to step down?

Our Chamber Board seems to have had problems with aggressive behavior for many years — long before the current director was expelled. What steps have been taken to address these general problems? What steps have been taken to deal with the aggressive tactics of other current directors? And, what steps were taken to deal with the expelled director prior to the expulsion? I see nothing in Board meeting minutes about the expelled director being asked to take a leave of absence, or resign, or apologize, or anything else. Considering the police found no grounds for charges, was jumping to an expulsion as the first option really the best choice the Board had available? Why did the Board conduct the expulsion using a loophole in the bylaws, given that the bylaws already provide a very clear and direct way to expel a Board member? Hasn't all of this made our Chamber vulnerable to a lawsuit?

I keep reading and hearing the directors claim they are, "just volunteers," as if that excuses the way this situation has been handled. This board includes a president and CEO of a large company. The Chamber Board is supposed to be made up of professionals representing the professionals of our community. Claims of incompetence due to volunteerism don't hold water for me. If this board is not up to the task of representing our business community, doesn't it need to step down?

Despite my evident dissatisfaction with how the Board has handled recent events, I do believe the Chamber can recover. However, as long as the individuals that have been part of this problem stay on the Chamber Board, the current situation will persist. Our Chamber needs a fresh start with directors that are not tainted by recent events. If our current directors care about the reputation of the Chamber, the other organizations they support, and their community, they must resign from their positions at the Chamber. The sooner this happens, the sooner we can begin repairing the damage from this unfortunate situation. I hope our Board can find the courage to demonstrate some real leadership, take responsibility for the mistakes made, and resign for the sake of our Chamber.

As a Canadian, a Whistler resident and a provincial taxpayer I find it outrageous that there are complaints about waiting an extra eight to nine minutes longer for a FREE bus service! (Pique Dec.8)

It is possible to walk from the Marketplace area to the Blackcomb Day Lodge in approximately 15 minutes with ski boots on and your skis over your shoulder.

Whistler is a relatively small town, which has a decent transit service for the size of the town. Yes, the current schedules and routes could be tweaked to make them better. However, I would like to point out again that you are complaining about a FREE service!