Letters to the Editor for the week of September 5

Won't somebody think of the children? I empathize with the writer of the "Topless March in Poor Taste" letter from the Aug. 29 Letters to the Editor.
Sep 5, 2019 12:00 AM By: Pique Newsmagazine Staff 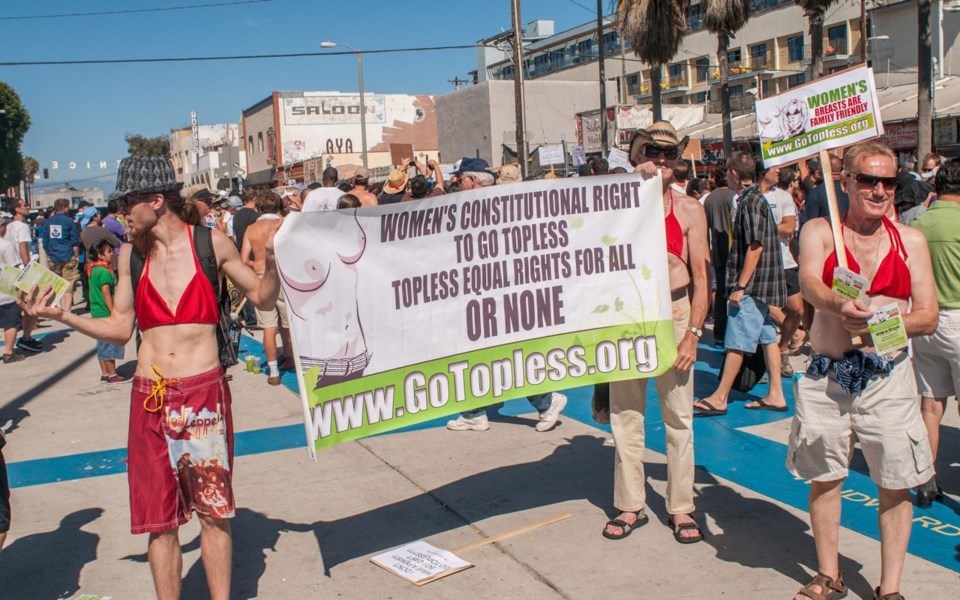 PRIOR PROTEST A Topless March in California in 2010. JTWeber/WWW.SHUTTERSTOCK.COM

Won't somebody think of the children?

I empathize with the writer of the "Topless March in Poor Taste" letter from the Aug. 29 Letters to the Editor. I cannot believe children (!!) had to see topless women during the march! I, for one, prefer to blindfold my baby when I breastfeed her, lest she discover that she has been receiving nourishment for the past 10 months from breasts, of all things. Won't somebody think of the children?!

And, of course, "flaunting their nakedness" (as the writer put it) will only result in disrespect for these women's bodies—because nothing says "respect yourself!" quite like forcing someone to cover up and feel ashamed of their own body. Avert your eyes, young men. It starts with a topless march to protest women's rights, then before you know it, BAM—teenage pregnancy!

Thankfully, as the writer mentioned, the fine men of Whistler are never seen around town shirtless, especially at the park and by the lake.

I am writing in response to Gail McKellar's letter "Topless march in poor taste" (Pique, Aug. 29).

Whether you've seen this or not, men have the right to take off their shirts at any time, anywhere, except in businesses as otherwise posted for sanitary reasons. Women do not have this right, as power structures and organizations prevent them from doing so. Why? Because breasts are sexual? Who made them that way? Not the infants that feed from them. Not the women that have them.

Toplessness and nudity are not inherently sexual. However, when it is socially acceptable for a man to be topless, but not for a woman, the message becomes that the female body is different and deserves to be sexualised. In 1920, the women who marched were told they were the equivalent of prostitutes to display themselves in such a way in public. Those women were fully clothed but were sexualized in an attempt to diminish and demonize their message.

This march and these types of protests are designed to help us question the beliefs that keep oppressive power structures and ideas in place in our society. There is definitely a great deal of pressure on youth today of all genders to share sexually explicit images of themselves. However, to be clear, it's not nudity (think getting in your shower) that's the issue. It's the sexualization of nudity that is the problem. This social construct has also taught our youth that sexuality is the only way to intimacy, driving them to share provocative images with one another.

Would I want my mother, sister, daughter or wife to participate in this march? Absolutely. I'll also invite my father, brother, son and husband to come with us. The more people, the better. The aim of the march is to draw attention to the fact that breasts are seen and treated differently than bare, flat chests.

Ironically, it is opinions like McKellar's that will keep the march coming back to Whistler for 10 years. In the Pique's article from Aug. 20 ("Topless march planned for Whistler"), the organizer explains that the reason the march left Vancouver is because it had become "less of a big deal." As soon as bare-chest equality is achieved in Whistler, there'll be no reason to march here anymore. I, for one, am looking forward to a bigger turnout in 2020.

Cultivating a sense of home

I'm so glad librarians don't shush us anymore, and that libraries themselves are more welcoming than ever for all kinds of people. If I still lived in Edmonton, my hometown, I'd be the first in line tomorrow morning to use their 3D printer.

But I loved his column, "A love letter to the library," in the same issue, even more. It really struck a nerve.

When I moved to Whistler in the early '80s, it was for a reporter's job like Brandon's, also for The Whistler Question. Like him, I wasn't really outdoorsy. I didn't ski, didn't jog, run, or play tennis. And, like the fellow who loves to enjoy the current library's spacious "living room" and watch a dusting of snow fall through its soaring windows, I didn't live in a grand house, and never will.

Like Brandon, I was also pretty far from family and friends, plus I'd grown up on a diet of art, books and ideas. Other than my work at the newspaper, and the great gang of people who worked there, I pretty much felt like a fish out of water, too.

So it was a total flashback when he described how the library gave him a sense of place—a home—that nowhere else did when he first moved to Whistler and felt like he didn't fit in.

It was that same kind of feeling that drove me to start the Whistler Arts Council (now Arts Whistler), the "family" that fostered the library and a whole bunch of other good ideas.

Picture it. It was 1982, and we, the gang who first met to weave arts and culture into the fabric of the community, didn't have a single physical space to call home—there was no Maury Young Arts Centre, no library, no museum. We didn't even have a dedicated room to meet in.

But this group of very warm, very smart, very funny, generous people who were very interested in the arts (I use "the arts" loosely) found each other and built a happy, comfortable space for ourselves and anybody else who longed for it. We encouraged each other, helped each other out, and made a sense of place from our dreams, some of which eventually came true.

As for me, I dreamt of, and got to enjoy it all.

It feels sweet—remarkable, even—to see how that little engine could do the same thing for Brandon and, I bet, a few other people over the years.

If anybody ever tells you that art and culture aren't important in a place like Whistler, don't believe them for a nanosecond.

And thanks, Brandon, for the memories.