When you look at the list of Israel's top exports, ski photographers are probably as far as you could get from the top of the list. That's because there's probably just one: Guy Fattal.
Oct 6, 2019 1:00 AM By: Vince Shuley 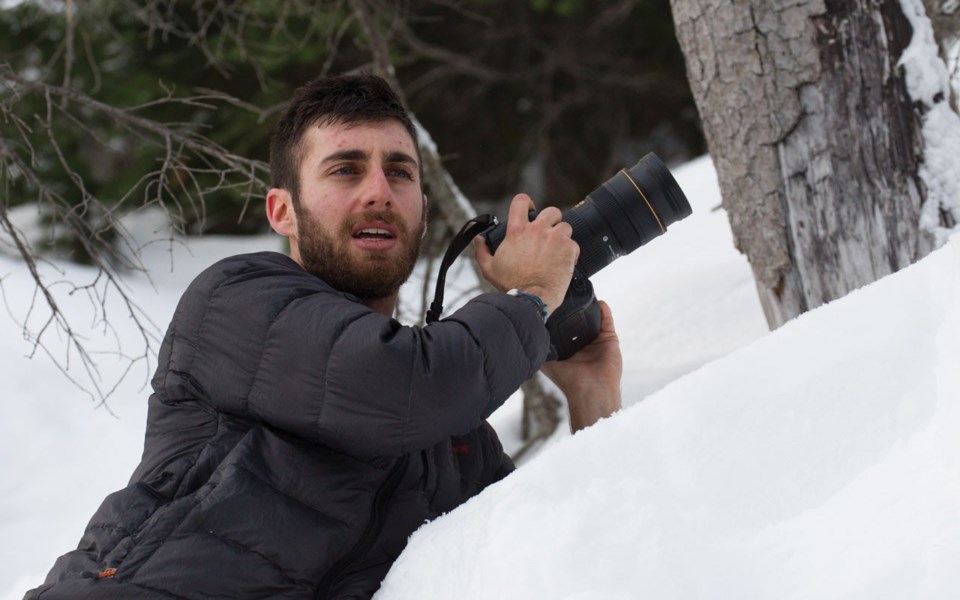 GETTING THE SHOT Guy Fattal in his element during the Deep Winter Photo Challenge. Photo by Vince Shuley

When you look at the list of Israel's top exports, ski photographers are probably as far as you could get from the top of the list. That's because there's probably just one: Guy Fattal.

The late-20s, bearded, now Sea-to-Sky local was regarded in recent years as one of the most promising up and coming photographers to grace the pages of ski magazines the world over. But the journey from the Holy Land through one of the ski industry's most competitive media landscapes was far from an overnight sensation.

Hailing from village of Har Adar in the hills west of Jerusalem, Fattal didn't have the geographic convenience of a ski hill within driving distance. Like many who grew up in snowless suburbs, Fattal owes his first sliding experience to a family ski trip. That came at age 11, when his father looked up an old friend from a student exchange trip to France during his own youth. Ancelle Ski Resort was where a wide-eyed Fattal first experienced the sensation of sliding on snow.

"My father would always look for the lowest-priced accommodation so we'd end up staying in a tiny concrete apartment in the French Alps with my father and siblings crammed into one room," he recalls fondly. "It was never anything fancy, but we'd just go out and ski from when the lifts opened until closing, every day for a week."

Back at his home in Har Adar, Fattal's second, more creative passion was blooming. At age 13 he took an interest in his sister's camera (a gift from their uncle), experimenting with the features and vehemently researching online photography forums every day after school. When Fattal first laid hands on the second-hand Nikon D50 that would become the tool of his trade, he knew his relationship with photography was anything but temporary. With the countryside of Israel at his door, he began to clock up the shutter count and hone his craft.

"Israel is such a small country, but you have a little bit of everything; landscapes at first like hills and forests, Biblical deserts in the south, mountains to the north and the crazy textures of the Mediterranean Sea and Dead Sea to the west and east," he says. "I would also shoot urban settings like streets and colourful markets."

While Fattal's aspirations of skiing and photography were at their pinnacle at age 18, he, like for every Israeli youth had to complete mandatory military service. Israel is considered one of the most patriotic countries in the world and military service is embraced by all classes, creeds and Jewish denominations. Men must serve for three years (women serve for two years), which for Fattal meant hanging up the skis and putting down the camera until he was 21. It was a period of rapid growth for Fattal, learning to deal with incredibly stressful, nerve-wracking situations, as well as the basic and advanced training that all Israel Defence Forces soldiers are expected to complete.

But as soon as Fattal's service was over, his first destination was the ski hill. This time with friends he headed for Grandvalira, Andorra. During his season in the Pyrenees Mountains between Spain and France, Fattal found his groove with skiing and photography while enjoying the relative luxury of cheap rent and affordable beer.

It was here he crossed paths with the CEO of an Israeli tour company and after presenting a portfolio of his work to date, was offered the position of in-house photographer. The experience of shooting all aspects of ski resort marketing was invaluable, but as the seasons ticked by he was already looking to spread his photography wings further. It was during the following summer, while bartending at a restaurant in Tel Aviv that Fattal experienced his next epiphany.

"I was serving drinks to an American guy at the bar and he had a copy of Skiing Magazine Photo Annual in front of him," recalls Fattal. "We got talking and he could tell I was really excited, so he left the magazine for me. I still have that copy with the KC Deane on the cover, shot by Grant Gunderson."

The following winter of 2014-15 Fattal pursued ski photography full-time in the hopes of one day landing a magazine cover photo himself. He travelled to resorts all over Austria and northern Italy taking photos with athletes and film crews. The work paid off, netting him a win at the coveted King of Dolomites photo competition and it wasn't long before he caught wind of a photo competition in Whistler called Deep Winter, a high-pressure, slideshow event captured in just 72 hours.

One of Fattal's biggest influences in photography, Jordan Manley, had won the Deep Winter "King of Storms" title three years in a row. After attracting some attention from event sponsor Arcteryx for his recent win at King of Dolomites in Italy, Fattal secured an invitation and was on his way to Whistler the following season.

It took two tries for Fattal to win Deep Winter, but those seasons firmly cemented his love affair with Whistler and the powder plantations of the Coast Mountains. Now grappling with the reality of a photo career and the split between editorial passion projects and commercial bill-paying gigs, Fattal has relaxed little in his ongoing mastery of light.

"When I go through challenging moments, which happen every day in this career, I go back to that night of standing on the podium at Deep Winter, time and time again," says Fattal. "There's always self doubt circulating in my mind and I ask myself: 'Am I good enough do this, to pursue this passion and survive? Then I look back at how I've made it happen all with my own two hands."

Vince Shuley isn't quite ready to start thinking about a deep winter. For questions, comments or suggestions for The Outsider email vince@vinceshuley.com or Instagram @whis_vince.