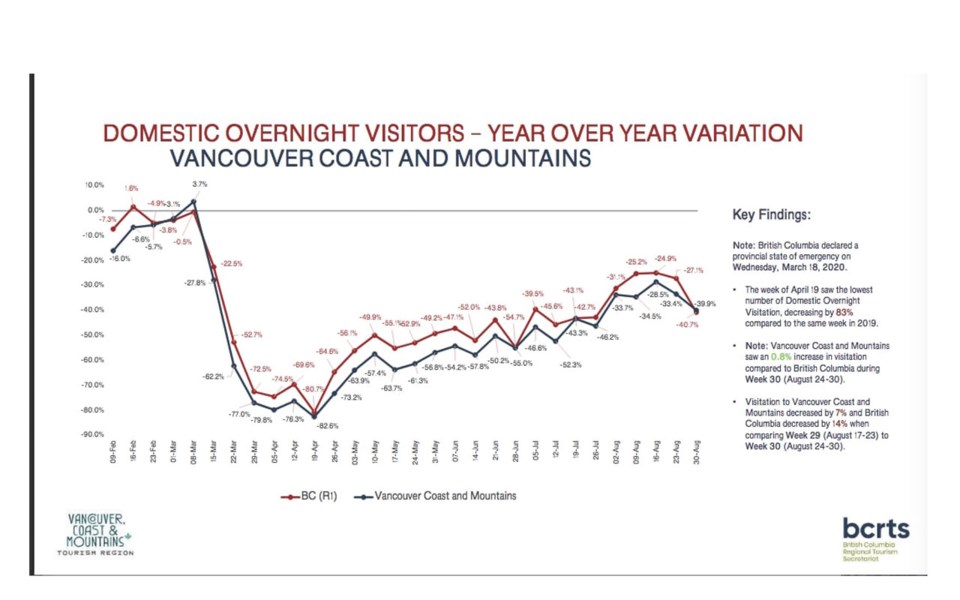 It’s the final days for government decision-makers to settle on how they are going to directly help the tourism sector with the $1.5 billion in recovery funds designated a few months ago. The industry has put forward a $680-million relief proposal to the B.C. government to tide it over until next year.

The province is considering the multiple submissions and public recommendations on how to distribute the money—but Whistler companies and businesses in this sector can still call, text, write or tweet MLA Jordan Sturdy (Jordan.sturdy.mla@leg.bc.ca) and urge him to work to get funds to the resort to help everyone weather this phase of the novel coronavirus pandemic.

It was encouraging to read last week (Pique, Sept. 3, “WB says it has enough capacity to make reservation system work”) that our weekend occupancy rates climbed to 70 per cent this summer. While it’s true that the weekday rates are substantially lower, these numbers are something to celebrate.

A recent Times Colonist story reported that Victoria’s rates are at about 35 per cent, and Vancouver is struggling, too.

Said Paul Nursey, chief executive at Destination Greater Victoria: “What we are seeing right now is there are people moving around, there is some limited domestic recovery.

“But it is a very weekend pattern.”

Nursey told the Times Colonist that visitors from around B.C. and Alberta are mostly heading to small resort towns and lakesides rather than camping out in the major hotels of Victoria and Vancouver.

These choices are likely a result of the government’s health messaging encouraging people to get out of cities into the fresh air—a benefit for Whistler and other more rural destinations.

But make no mistake, as we head into fall, small businesses here will face a make-or-break situation.

Whistler and Kelowna are apples and oranges, I know; however, a recent survey in the Okanagan region offers some interesting insight into the situation there. A Stakeholder Impact Survey by Kelowna Tourism found:

• 67 per cent of respondents have seen a 20-per-cent-or-higher decrease in revenue over the summer season;

• 74 per cent are forecasting a 20-per-cent-or-higher decrease to revenue for the fall season; and,

Some of the hardest-hit businesses by COVID-19 are in the food and beverage and nightclub category—an important and robust sector in Whistler pre-pandemic.

There is no doubt that some of these businesses are teetering right now as we head into shoulder season. The provincial order issued on Sept. 8 requiring nightclubs to close and bars to stop liquor service at 10 p.m. and shut by 11 p.m. won’t help matters.

The Chamber is predicting that 60 per cent of Canadian restaurants could fail within three months.

“It’s very worrisome,” CEO and President of the Canadian Chamber of Commerce Perrin Beatty told CTV News in late August, adding that 1.2 million Canadians are employed in the restaurant industry with an annual payroll of $30 billion.

At the best of times, he said the profit margins are only four to six per cent—so trying to make money during the pandemic is near impossible. “If you take half the seats out of a restaurant because of social distancing, it is simply a matter of mathematics. There is simply no way you can make it work no matter how hard you try,” Beatty told CTV.

Like the tourism sector, Beatty wants government programs put in place specifically tailored to help restaurants get through the pandemic.

Let’s not lose sight of the fact that 25,000 businesses closed across Canada in March and April, according to the latest figures available from Statistics Canada.

We want as many of our Whistler businesses to survive as possible. So let’s make our voices heard as the government looks for ways to support tourism.