MAXED OUT: Waiting for the Sun to come out 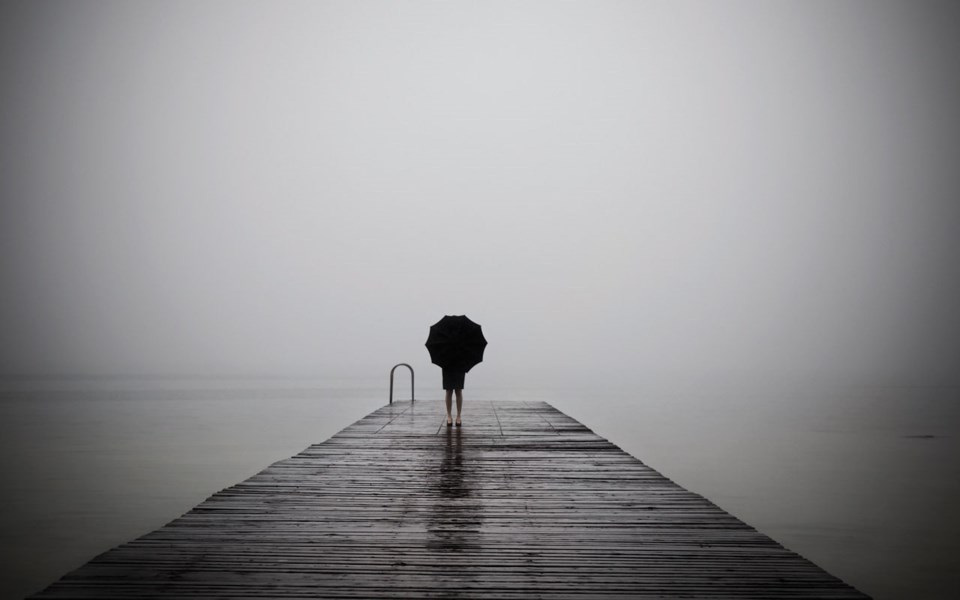 The trouble with relativity is its lack of immediacy. I’m not talking about Einsteinian—E=MC2—relativity, nor do I refer to the kind of relativity packaged as family values or milked as in-law jokes.

The insidious relativity to which I refer is of the one-upmanship or, in this case, downmanship, sort that knocks the legs out from under a perfectly good snit. For example, I know, within the context of Canada, things could be relatively worse. I could still be living in Toronto where, no doubt, I’d be wheeling around a canister of oxygen and frantically calling all over town in a futile attempt to have air-conditioning installed in my sweat lodge home, seeking relief from the Gemini demons of heat and humidity, not to mention visible pollutants and noxious fumes of modern, urban hell. Relatively, that’d be worse.

I could live in the endless flatlands of Manitoba or Saskatchewan. That train of thought could be derailed without further comment right here. So I’ll derail it. Relatively, that’d be worse, although the advent of medically assisted death would be the white light at the end of my tunnel.

Or, I could be living in Alberta. On second thought, no I couldn’t. Even relativity has its limits. Besides, my pickup truck is too small. I’d be laughed out of the province.

So, relatively, without even going to Third World places like Africa or Florida, things could be a lot worse. But I don’t live in any of those places. I live, instead, in a place where the sun rarely shines, the rain hasn’t stopped for more than a couple of days since April and the deeply beloved respite from Canadian winter—summer—didn’t show its face during the entire month of June and isn’t anywhere in my long-range forecast. This sucks!

Being an ancient civilization, the Chinese reputedly were the first to recognize the demoralizing, deranging effects of persistent rain. Over the course of many centuries, they realized the slow, steady drip of simple water could not just wear down great mountains, but wear down the resistance of people and drive them crazy. In the overall scheme of things, watching people go crazy, especially your enemies, is way more fun than watching mountains melt.

They were also smart enough to realize how useful a trick like this would be when the British ultimately arrived to trade opium for tea. Reputedly, the first English Gentleman they guinea-pigged water torture on laughed and called them crazy. After several hours, he was in a more conciliatory mood. By the end of the day, he was reluctantly willing to eat Chinese food and not call it “filthy Woggie swill.” After a couple of days, he actually admitted Chinese Checkers was a superior game to cricket, but then, what isn’t? When a week’s worth of drips had dimpled his forehead, he was completely starkers, barking like a Yorkshire Terrier and speaking in tongues. It was at that point he finally capitulated and agreed to bathe. The Empire was saved. Temporarily.

Having long ago been broken by 2020’s version of water torture, I have resolved to pledge what remains of the months formerly known as summer to spiritual matters. Not being a particularly spiritual person, I appreciated this quest was doomed to failure but was surprised it lasted as long as it did—from early morning, when I first thought of it, until cocktail hour that afternoon. A personal best.

“Chilly. The water’s chilly.” The words were uttered over the most recent holiday weekend by a post-adolescent male clothed in a dripping swimsuit and enrobed in not-quite-lost baby fat, reinforced by a supersized, and I almost hesitate to say, Alberta lifestyle. They were uttered in a strained falsetto masking pain, astonishment and that particularly self-conscious loathing one feels for oneself when one is stupid enough to accept a bet best left on the table. He’d made the mistake of accepting a sibling dare and jumping into the still frigid waters of Sulfurious Lake. Normally a refreshing swim on a hot, dry day this time of year, the rain-swollen lake is busy establishing new high watermarks and is so cold I could have sworn he was wearing a bow tie when he quickly jumped right back out.

Ironically, as summers go, this one is very reminiscent of the winter just past, which is to say, crappy. I’m pretty sure that’s what makes it, relatively, so much harder to take. Having soldiered through a pandemic-foreshortened winter with the resolve of a 12-Step program survivor, it’s all too much like a rerun. The grass is too wet to mow, too dry to swim in. Everywhere I step on the sprawling expanse of Smilin’ Dog Manor, I hear “Squish” and leave a pond-filling footprint.

I’ve lived in British Columbia long enough to accumulate a breathtaking variety of all-weather—reputedly waterproof—clothing. Nonetheless, I’m resigned to walking in the rain, paddling in the rain, gardening in the rain and generally hanging in the rain long enough and actively enough that the accumulated sweat underneath the Gore-Tex reaches stasis with the outside air and I wind up just as wet as if I’d just been wearing a cotton T-shirt or plastic bag. Working on the theory that if I ever get to the point of actually enjoying being in the rain it’ll stop just to spite me, it becomes clearer and clearer that SAD is not an affliction limited to winter month’s parsimonious daylight hours.

So I seek refuge in things relatively trivial. Strawberries and beans are growing apace in their ramshackle yet rain-proof enclosure and are managing to ripen and give the appearance of being bountiful. Cold weather plants—potatoes, peas, carrots, beets and such—haven’t yet drowned and hold out hope of one day being edible. Rainbows appear frequently late in the day when the sun, at least I think it’s the sun, drops below the bank of relentless clouds just before setting. A family of loons hasn’t had their chicks eaten by the eagles yet. A week’s worth of hot sun might warm the lake enough to swim in. I could win the lottery. Pigs could fly.

There are a lot worse things than a no-show summer. I’m not certain what they are right now but people do mention the lack of wildfire hazard and, admittedly, evacuating to a shelter would be akin to the frying-pan-into-the-fire cliché in this time of social distancing. As comfort goes, that’s relatively thin gruel. But as Annie sang, the sun will come out tomorrow. Until then, I’m going out to stand in the wet spot of sunshine falling on the ground, before it vanishes for another few days, and pretend it’s summer.