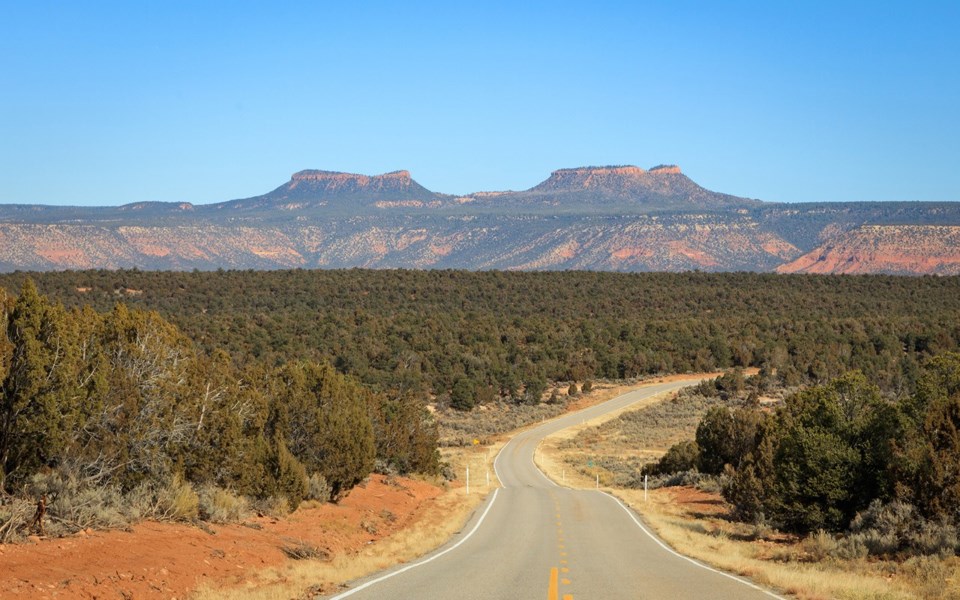 DOWNSIZED With the swipe of a pen U.S. president Donald Trump has downsized Bears Ears National Monument by 85 per cent. But business leaders and environmental groups are ready to fight the change and keep the area as it was. <a href="http://www.shutterstock.com">www.shutterstock.com</a>

When Donald Trump (a.k.a. #Dolt45, #MangoMussolini) travelled to the state of Utah on Dec. 4 to ink proclamations downsizing Bears Ears National Monument by 85 per cent and Grand Staircase-Escalante National Monument by nearly 50 per cent (a combined total of 2 million acres), it heralded not only a dark day in American politics (he's the only president ever to revoke the protected status of such lands), but in a land-conservation movement that goes back two hundred years in that country.

In typical ham-fisted conservative fashion, Trump cloaked his move as defence/pushback against "a small handful of very distant bureaucrats located in Washington," who would, by protecting these lands, exert de facto control over Utah's natural resources.

National Monuments are similar to U.S. National Parks, except the latter are designated by acts of congress while monuments are created by presidents via the Antiquities Act of 1906 — a tool used by both parties to protect federal lands.

Because President Barack Obama signed Bear Ears National Monument into existence just before leaving office in December 2016, some rightly see Trump's radical reductions as part of his continued obsession with undoing any Obama-era accomplishment. While nearly three million Americans commented during the public review period, 99 per cent argued in favour of leaving the protected areas untouched. Who were the contrarian one per cent? No surprise there: "The drillers, miners and frackers who were shut out by Bill Clinton and Barack Obama's use of the Antiquities Act would have new leases on life," said a CNN report.

Indeed, the New York Times thought Trump's environmental tirade "could alter the course of American land conservation, possibly opening millions of protected public acres to oil and gas extraction, mining, logging and other commercial activities." Fortunately, a coalition of environmental and natural-resource law scholars from across the American academic spectrum concluded that Trump's move was illegal, and quite likely to be overturned in court.

Within days, representatives of the Hopi, Zuni, Ute and Navajo Nations filed suit in Washington alleging that Trump's shrinking of Bears Ears was an abuse of power "in violation of the United States Constitution and the Antiquities Act." At the same time, The Wilderness Society, Natural Resources Defense Council, Sierra Club and seven other plaintiffs sued Trump and Interior Secretary Ryan Zinke over Grand Staircase-Escalante, again arguing the decision was unlawful and "exceeds (Trump's) authority under the US Constitution and the Antiquities Act."

Yvon Chouinard, founder and CEO of Patagonia, told CNN's Bill Weir he would also fight Trump on this. "I think it's a shame that only four per cent of American lands are national parks. Costa Rica's got 10 per cent. Chile will now have way more parks than we have," said Chouinard. "We need more, not less."

Chouinard is part of a large coalition that has also filed suit against the changes to Bears Ears. Those plaintiffs include Patagonia Works, Utah Diné Bikéyah, Friends of Cedar Mesa, Archaeology Southwest (there are hundreds of Native American dwellings and artworks in the monument), Conservation Lands Foundation, Access Fund, the Society for Vertebrate Paleontology (the place is loaded with important fossils), and the National Trust for Historic Preservation. North Vancouver's Arc'teryx, another tireless supporter of public lands, donated net proceeds from its U.S. e-commerce sales on Nov. 28 (Giving Tuesday) to The Conservation Alliance, along with an additional $30K to that organization's Public Lands Defense Fund.

The question, of course, is how long these processes will take to wend their way through the courts and what damage may be done in the interim. Already, uranium and oil interests are lining up to enter lands removed from the monuments — the real reason Trump did so. In fact, resource companies reputedly dictated the new boundaries in much the same way oil companies dictated revision of the Fisheries and Navigable Waterways Acts in Canada. But although idealogically aligned with Trump's odious GOP, even the despicable HarperCons hadn't dared try anything so bold as stealing protected lands, relying instead on Canada's vastness and the continued ability (in the past, at least) for radical extractionists to go into remote, unprotected areas and operate very much under the social, cultural, political and environmental radars. Still, Christy Clark's B.C. "Liberal" conservatives managed to pass the Park Amendment Act in 2014, a controversial piece of legislation with zero social license that allows government to issue park-use permits under two general categories unrelated to the mandate and purpose of BC Parks: film production and research — the second a term vague enough, as Green Party MLA Andrew Weaver pointed out at the time, to accommodate exploratory drilling.

Yvon Chouinard, echoing the battle cry of the anti-Trump movement "Recover, Resist, Reform," best sums general reaction to these industry-driven conservative land-grabs. "I think the only thing this administration understands is lawsuits," he told CNN. "We're losing this planet, and we have an evil government. And not just the federal government, but wacko politicians out of Utah and (other) places. I mean, it's evil. And I'm not going to stand back and just let evil win."