MUSEUM MUSINGS: Finding a space for the UBC club cabin 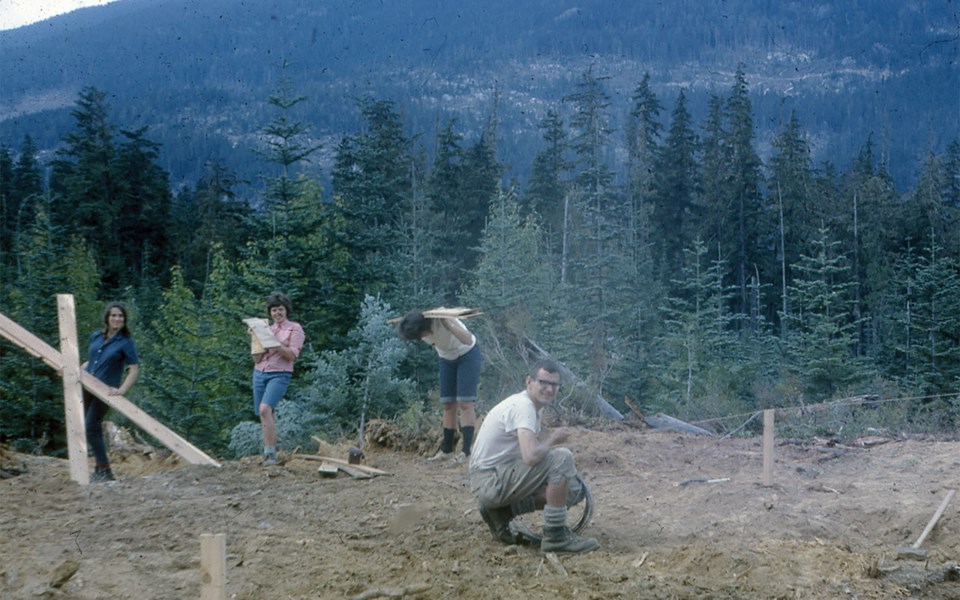 Members of the UBC Varsity Outdoor Club survey the parcel of land for the Club Cabin. Karl Ricker Collection

Last week, we mentioned a recent donation of journals published by the UBC Varsity Outdoor Club (VOC) in the 1960s, covering the period during which the club cabin in Whistler was built. Combined with an oral history conducted with Karl Ricker (who donated the journals) last year, the journals provide a lot of information about how the VOC cabin came to be, even before lifts began running on Whistler Mountain.

According to Ricker, Jack Shakespeare, a member of the Garibaldi Olympic Development Association (GODA), began attending VOC meetings in 1963 to promote the proposed development on Whistler Mountain. At the time, the VOC already had a cabin on Mount Seymour but it was reportedly not being used as a ski cabin. so the VOC began to look seriously at building a cabin at Whistler in 1964.

The idea had to be approved by the VOC membership and it wasn’t immediately accepted by all, as Ricker recalls some people fighting to stay on Seymour. The Whistler idea, however, did win out and the club began searching for a site to build a cabin.

Charlie Daughney, then a PhD candidate, led what was described in one VOC journal as “the long and frustrating search for land.” According to Ricker, the VOC first staked out land in what today is Kadenwood, but were then told that there would be no overnight parking at the Whistler Mountain lifts. There was land available to buy at Jordan’s Lodge but the club did not have the money. They were encouraged to look into applying for a piece of land on Alpha Lake but a search through records showed it was not Crown land but belonged to a man named John Quirk or his descendants. The club even looked at building on the island in Alpha Lake but backed off due to the cost of building a bridge.

Finally, in February 1965, the architect planners for the area and GODA told the VOC that there were plans to create a club cabin area in what is now part of Nordic Estates (Ricker mentioned that a club cabin area was also a way to guarantee customers for the lift company). The next step was to find the tract of land set aside for club cabins, which at the time was simply marked by lines on a map. In the early summer of 1965, members of the VOC ran a survey from the last known property lines in the area and put in their own stakes.

As the first club to plan to build in the area, the VOC acquired “the choice lot” with views of Whistler Mountain and reasonable access to the parking lot that was to be constructed just off the highway. Though it took longer than expected, official permission was granted by the provincial government to use the land for club cabins before the end of the summer. In the process, Ricker received a call from a land inspector who had been told to inspect the parcel of land “right away” but didn’t know where it was. Ricker met him at the train station and showed him to the parcel and, despite a few concerns, the land was approved for the VOC. Government surveyors later arrived to do their own survey of the area but, according to Ricker, by that time construction of the VOC cabin was already underway.

We’ll have more on the construction of the VOC cabin next week, as well as reports of some of the first parties held in the structure.