Museum Musings: The village that ceased to exist: Part 1 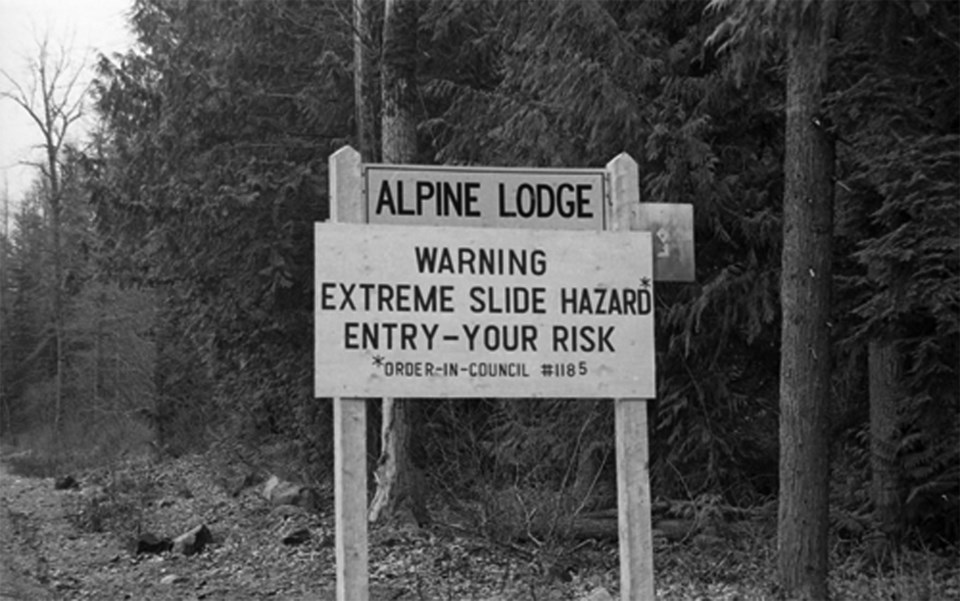 Hazard sign outside Garibaldi Townsite after the community was told they had to leave or stop upgrading the site. Whistler Question Collection, 1981

Since the day of the mandatory evacuation order in 1980, the removal of the Garibaldi Townsite has been shrouded in controversy. A small-but-growing community was urgently ordered to leave their town, and the fight that ensued made headlines for years. During the evacuation, tensions ran high, motives were questioned, and a variety of theories (some more feasible than others) were put forward.

At the centre of the controversy is the Barrier, a lava rock face that dams the Garibaldi Lake system—it is over 300-metres (980 ft) thick and about 2.4-kilometres (1.5 mi) long where it impounds the lake.

As early as the 1850s there were concerns about the stability of the rock face. Indigenous oral histories document a destructive landslide in 1855 that resulted from a slab of rock falling from the Barrier. Later that decade, William Downie, a surveyor sent to the region by the Hudson’s Bay Company, noted in his diary that the land beneath the Barrier had been ruined, and voiced concern over its stability. It took more than a century for something to come of these accounts, and in the meantime the area continued to be developed.

In the 1970s, the Department of Highways commissioned a study to determine the stability of the Barrier. The subsequent report by the Garibaldi Advisory Panel (also known as the Barrier Report) was completed in May 1978. It claimed the risk of another slide was relatively low, but, if one were to happen, the results could be catastrophic. It recommended that “concentrated development” be limited in certain regions, but said nothing about evacuating existing communities.

Even after the risk had been established, the report lay dormant in Victoria for two years. During those years, the residents of Garibaldi built a new fire hall, repaired the schoolhouse, and cleared space for a playground. What happened next came as a complete shock to the growing community.

In May 1980, an Order in Council was issued that declared Garibaldi a civil-defense zone and prohibited “development, construction, excavation, or alteration” of any land in the implicated area. This meant that residents became tenants on their property, and that they had to choose between selling to the government and living on land that they could no longer alter.

There are many theories about why the evacuation happened when it did, and in order to begin to understand those theories, it is helpful to know what was there before the evacuation. Garibaldi Townsite began as the Garibaldi Station, and was one of the many communities that owed its origins to the expansion of the railroad.

At first, it followed a similar trajectory to Alta Lake. Development began in the early 20th century and picked up in the late 1940s when families who were unable to find accommodation in Vancouver were drawn to the valley (back then Vancouverites often lined up outside newspaper offices to get an early look at rental listings). For some time, Garibaldi had a larger year-round population than Alta Lake, and one Garibaldi resident, after having spent the winter of 1946 working in Alta Lake, described it as a “terrible place” that was  “ten times as desolate as Garibaldi.” By 1960, there were just over 60 full-time residents (with up to twice as many on weekends), and the town had its own campground, post office, fire hall, and store. By 1980, when the order was issued, Garibaldi was well on its way to being an established community and tourist destination.

Next week’s article will cover the many conflicting theories about why the evacuation happened when it did, and will detail what happened to the residents after they were forced to leave.

Keely Collins is one of two summer students working at the Whistler Museum this year through the Young Canada Works Program. She will be returning to the University of Victoria in the fall.