In case you have forgotten, or never even knew, the reason mountain resorts got started in the first place was not for skiing, climbing, or even hiking. It was for spa-ing.
Jan 14, 2015 5:00 PM By: Leslie Anthony 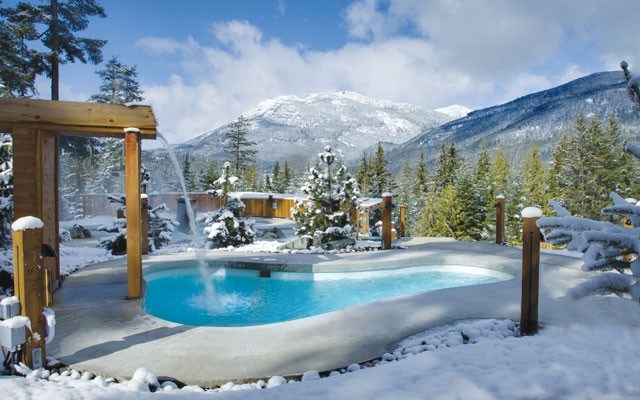 In case you have forgotten, or never even knew, the reason mountain resorts got started in the first place was not for skiing, climbing, or even hiking. It was for spa-ing. From Switzerland to Banff, people visited the mountains to take the air, and stare at the higher ground while soaking in a natural hot pool or two. We may have started our own modest mountain experiment in Whistler for the previously listed frivolous reasons, but the bromine-scented heritage of international spa creep wasn't far behind. We might be lacking hot springs in town, but for the last few years at least, we've had the next best thing at our wriggling toe tips.

As a first principle, modern spas go to some length to evoke our connections to nature. Whether in the sweep of architecture, strategic placing of plants, profusion of wood and stone, or background recordings that variously mix meadow-skipping piano sonatas with gurgling water, trilling frogs, and birdsong, spa visitors are invited to conjure a Bambi-esque vignette of flitting creatures and furry little bears munching happily on clover beneath soaring arbours.

This sets the scene: the nature we've nurtured ourselves out of.

As a magic pill for reducing stress and anxiety, we implicitly understand such soporific stimuli as central to the human subconscious, and facilitating of the relaxation we seek in such venues. And if that calm descends from the get-go — as it does on the bucolic 50-metre forest stroll into Whistler's Scandinave Spa, replete with genuine natural symphony and, during summer, the occasional bear close enough to fill a phone-camera frame — then you've clearly embarked on a failsafe recovery mission that elsewhere might only be imagined.

Yes, with more death-defying activities than an episode of Fear Factor, two thigh-thumping, mile-high mountains, and a nightlife of comparative depth, "recovery" is key to the health of both citizens and visitors alike. After two long days skiing deep early season ice with a few hard-charging buddies, each bookended by a bacchanalian night on the town, both toxins and lactic acid had accumulated faster than snowflakes. With some form of post-hoc management called for we'd headed to the Scandinave, which, outside of the Southside Diner's B.E.L.T.C.H. sandwich, I knew to be the best and simplest remedy to such ills.

Situated on a hillside in spruce and cedar forest, with views over treetops to our blessedly rugged peaks, the 20,000-square-foot complex has established itself, in four short years, as the most popular — and best — of Whistler's numerous spa experiences. The Quebec-based owner boasts numerous awards for facilities in Montreal and Mont Tremblant, as well as Blue Mountain, Ontario, but its Whistler location became its instant crown jewel, with a Saturday overflow to match the mountains' lift lines. The basic premise is good ol' Scandinavian hydrotherapy — alternating three to four times between various options of hot and cold. Widely recognized for its energizing and relaxing effects, hydrotherapy cleanses, stimulates blood circulation, and, best of all, releases a few choice endorphins to take home with you. Wandering in a fluffy robe from one treatment to another through a stunning outdoor setting — where you can pause to lounge around a fire while (in better years) snowflakes kiss your eyelashes — makes it all the more enchanting.

You start with heating to dilate surface vessels; this increases the blood flow to skin and muscles, releasing the bad stuff — chemicals absorbed from air, water, food (and booze) as well as residual metabolic toxins. Eschewing the hot pools in favor of a non-immersive heating method, I started my group in the eucalyptus steam bath, then spun two laps through the largest wood-fired Finnish sauna I've ever seen (despite annual tours through Scandinavia), revelling in its spaciousness, the snap of burning wood, and pine-scent-laced water dribbled onto heated rocks. The latter is done by a circulating attendant who also stokes the fire from outside, ensuring an even high-temperature despite the formidably numerous comings and goings of patrons. We occupy an upper deck, where through narrow windows my attention is drawn outside to the fractal geometry of ferns and cedar branches, and the juxtaposition of rock and snow. Clearly I'm so relaxed that I'm high, aided in no small part by the rigorously enforced silence (talking is not allowed at the Scandinave — a nightmare for some, a godsend for the rest of us).

Between these warm-ups we bob in various cold pools and under a cold waterfall, the plunges acting like a quick transfusion — you can practically feel the "bad" pumping out and the "good" pumping in, to a soundtrack of crickets.

Moving between these along cement walkways (I prefer barefoot though others bring or buy sandals) you're aware of the Scandinave Spa and its baths as a unique landscape-derived activity. Low-slope, vegetated roofs create efficiencies for heating and cooling, buildings are oriented to optimize winter sunlight and create a microclimate enclosure, and drought-tolerant, pest-resistant, regionally appropriate (non-invasive) plants fill intervening spaces. Nods to energy efficiency include smart, gravity-assisted water use and heat-recovery. Sophisticated yet practical Scandinavian sensibilities mean money isn't wasted on ostentatious décor, yet all is both elegant and earthy, with great attention to detail in everything from steel water bottles to a careful selection of food, to the magazines, hammocks and chairs of the solariums where you relax to let your circulation reset after hydrotherapy.

This being early enough in the season for every muscle to feel unduly put upon, we follow up our wanderings with an hour-long, expertly rendered Swedish massage — not too deep, not too superficial — that goes a long way toward vanquishing the weekend's worth of warrioring for my friends, and my own low-snow angst. In the end, after four luxurious hours, I've accomplished what I came for: flushed some toxins, soothed some messed-up muscles, and scored a general sense of well being. I totter out with endorphins gently ebbing, the sounds and smells along the trail made all the more sharp by my restoration.